Amman, Jordan’s largest city and capital, is a relative youth in comparison to other Middle Eastern cities. Rapid expansion and development ensued after the city was designated capital by then Emir Abduallah in 1921. Prior to this the area now known as Amman served as an important base for various cultures, including the Ammonite civilization during the Iron Age and the regional centre of Hellenistic culture under Ptolemy II who named the city ‘Philadelphia’. During Roman rule, the city was one of ten Greek cities of the Decapolis, however, from the middle ages up to 15th century, the city alternated between periods of devastation and abandonment. From 1878, the Ottoman authorities began to settle Circassian refugees here which helped to form the foundations for development of the city from 1921.

Modern day Amman is one of the easiest cities in which to enjoy the experience of the Middle East. Originally built on seven hills, the city has now grown to encompass a total of 19. Despite this, Amman is a walkable city with a many interesting attractions to visit. Of notable value is the ancient Roman theatre that dominates the downtown area and has been incredibly well preserved by the dry and arid desert conditions. The sheer scale of the ruins are impressive and climbing to the top of the vertiginous 6,000 capacity arena evokes a great sense of the historical importance of the structure.

Further ancient sites include the Umayyad-era Citadel located on the peak of one of the ancient seven hills that the city was built on. With panoramic views of Downtown this is a great place to witness sunset and the buzz of the evening call to prayer.

The laid-back bohemian district of Jabal Luwaibdeh is perfect for an easy stroll and is full of bright murals and traditional cafés where one can enjoy many of the local delicacies. 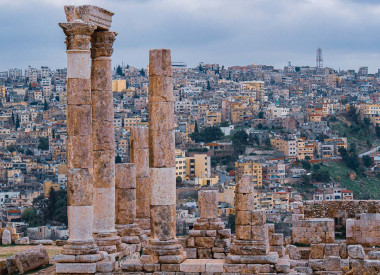