The quintessential desert experience, Wadi Rum is one of the most spectacular natural environments in the Middle East. A truly mesmerising landscape with scorching temperatures in the summer months and bitter cold during winter; the natural light at dawn creates vivid beams through the chiselled canyons and unforgettable silhouettes of the Martian-like rock features beaten by centuries of sandstorms. In fact, Wadi Rum was used as the setting of the red planet in the Ridley Scott film The Martian and the epic historical drama Lawrence of Arabia. As dusk descends this picture seemingly melds into one and is illuminated by the emerging constellations of the night sky. Because of the optimal conditions of the area, Wadi Rum is considered one of the best places in the northern hemisphere for stargazing with good opportunities to witness the Milky Way and meteor showers, amongst other activity.

The area of Wadi Rum is rich in both natural phenomena and sites of cultural importance. The best way to experience the desert is to take a 4x4 jeep excursion which allows you to visit such areas as Lawrence Spring with amazing views over the Wadi, Khazali Canyon, the Red Sand Dunes and the ancient rock inscriptions of the camel caravans at Anfishieh.

Staying in a desert camp allows you the opportunity to connect with the Bedouin people who call this area their home and to sample the traditional cuisine of this region. 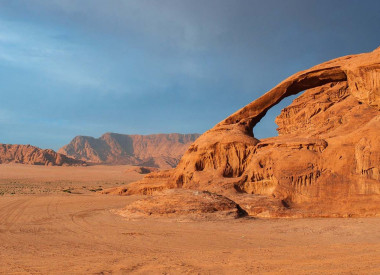