Casablanca is Morocco’s largest and most populated city. A seaport and the economic center of Morocco, Casablanca is in complete contrast to the other imperial cities to come.

Originally founded and settled by Berbers, over time Casablanca has been occupied by the Romans, Arab tribes, the Portuguese, Spanish and French. From its Spanish namesake ‘Casablanca’ or ‘white house’ originating from the Moorish white houses that line the coast, to the extraordinary art deco architecture of the French rule, to the impressive Hassan II Mosque built by Moroccan artisans - all have left their mark the city’s architecture and culture.

Morocco gained independence from France in 1956, but Casablanca retained its colonial charm.

Casablanca was immortalised in the famous 1942 movie, starring Humphrey Bogart, but was actually wholly shot in Hollywood.

Perhaps the most iconic feature of the city is the dominating Hassan II Mosque which was constructed between 1980 and 1993 and stands proudly on the shores of the Atlantic Ocean. One of only two mosques open to non-Muslims it is replete with intricate mosaics, huge marble columns, horseshoe-shaped arches and carved, painted wooden ceilings. 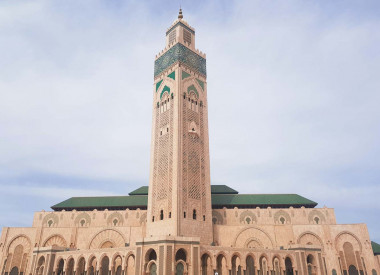