Essaouira (‘essa-weera’) is an 18th century UNESCO-listed coastal town which is said to be Morocco’s most relaxed destination. Referred to as the ‘Wind City of Africa’, owing to the coastal winds named alizee that are present for most of the year, Essaouira has managed to maintain its traditional culture and character. The fortified medina is replete with art galleries, boutiques, workshops and other handicrafts shops, alongside restaurants selling fresh seafood and traditional Moroccan dishes.

First established by the Phoenicians in the 7th century BC, then used by the Romans who used the bay’s mollusks to dye their togas imperial purple. The Portuguese later used the port as a trading base for precious metals, spices and slaves. British and Jewish merchants were attracted to Essaouira in the 19th century as it was the only port south of Tangier. During the years of the French protectorate, trading was moved to Casablanca and the importance of town began to decline. 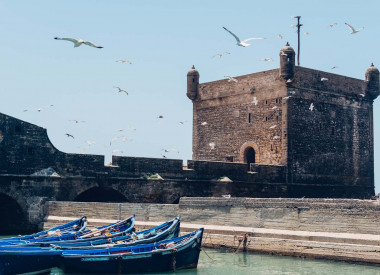