Known as the Red City, Marrakech is located at the foot of the Atlas Mountains.

The imperial city was founded in 1062 as the capital of the Almoravid Empire, a Berber tribe from the Atlas Mountains. The construction of the impressive red city walls made it a fitting capital for an empire which stretched from modern Andalusia down to the Senegal River. For 400 years of Berber dynasties, Marrakech was a major political, economic and culture centre of the western Muslim world.

Around Jemaa El-Fna are colourful souks – a sprawling marketplace that sells everything from fragrant spices, handmade carpets, pottery to silk kaftans and jewellery. This is the ideal place to purchase souvenirs for bargain prices, if you are prepared to haggle.

Marrakech is also home to some of Morocco’s best architecture in the form of mosques, palaces and gardens.

Visit the lavish Bahia Palace with 160 rooms, courtyards and 8 acres of gardens. Built at the end of the 19th century, the Palace is located in the medina, close to the Royal Palace, the El Badi Palace and the Agdal Gardens.

Explore the Menara Gardens, a 12th century orchard of palm, olive and fruit trees. Its water reservoir and pavilion against the backdrop of the High Atlas Mountains is one of Marrakech’s iconic sights.

Visit Koutoubia Mosque, the largest mosque in Marrakech. Built in the 12th century by the Almohad dynasty, the mosque is considered a major example of Moorish architecture. It is said to be a prototype for the Hassn Tower of Rabat and the Giralda of Seville Cathedral in Spain. 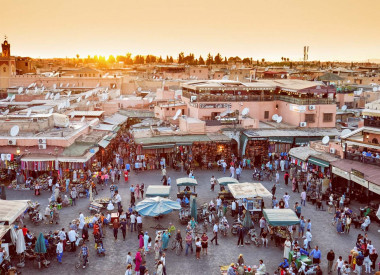