Meknes, one of the four imperial cities of Morocco, located in the northern central region of the country is a UNESCO world heritage site. Founded in the 11th century, the city became the capital of Morocco under the reign of Sultan Moulay Ismail who created a massive imperial palace complex and endowed the city with extensive fortifications and a series of monumental gates.

The heart of the medina is the Place el-Hedim which is a vibrant area full of activity. The Bab el-Mansour, which was completed in 1732, is an impressive gate known for its original green white hued Zellij tiles and marble columns. The Mausoleum of Moulay Ismail, the ornate tomb to the founder of the city, is also fascinating.

A 45 minute drive north is the UNESCO site of Volubilis.  The ruins of this Roman city date back to the 3rd century BC and mark the westernmost edge of the Roman Empire. Impressive structures remain with paved streets, Roman archways and buildings. The site has several well-preserved mosaics with intricate detailing. 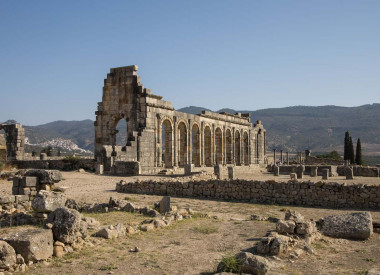