Ouarzazate is known as the ‘doorway to the desert’. Historically, it was a small crossing point for traders on their way to Northern Africa and Europe. During colonial-French rule, it transformed into a garrison town, acting as an administrative and customs post. It is now know for the 17th century Kasbah Taourirt, which was taken over by the Glaoui family in the 19th century. Part of the Kasbah has been restored by UNESCO and displays intricate, vibrant decorations.

A short distance to the west of Ouarzazate is the historic fortified village and UNESCO World Heritage Site of Ait Ben Haddou that dates back to the 11th century. An important stop on the former caravan route between Marrakech and the Sahara, it is an example of a traditional adobe-walled city and is immaculately preserved, with some families still living within the walls of the ancient structure. 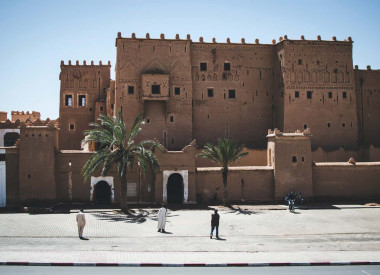