Lying 350 kilometres from the capital, Swakopmund sits at the southern edge of the famous Skeleton Coast in the heart of the Namib Desert. This small coastal city is full of character with its half-timbered German architecture and seaside promenades. The Nama people have occupied the mouth of the Swakop River since ancient times, with the first permanent settlers, from Germany, arriving in 1892. Swakopmund was German South West Africa’s only harbour, and the port emerged as the leading trade funnel.

Here, the German influence is strong, as a lot of the local architecture will attest to. Swakopmund is a popular destination for local holiday-makers and is well-known for adventure activities like sandboarding and dune buggy tours. For the less adventure-inclined, activities include visiting colonial landmarks such as the old lighthouse and the mole (the old sea wall), and boat trips to see the nearby seal colony and pelagic birds. There is also the chance to visit the protected lagoon at Walvis Bay, where you can sometimes see large flocks of Greater Flamingo gathering. This wetland haven is a phenomenal spectacle, supporting more than 150,000 birds including pelicans, plovers, gulls, grebes and migratory waders.

The Skeleton Coast gets its name from the bones that lined the beaches following whaling operations and seal hunts. Skeletons of stranded whales that lost their life here were used by the Ovahimba people to build huts. Numerous ships were stranded on this coastline due to the thick fog, stormy conditions and shifting underwater sandbanks, which made it impossible for sailors to reach the land. Despite its hostile character, the landscape is stunning and it is possible to visit the shipwrecks and natural rock formations. 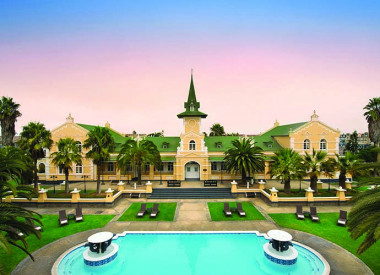