Covering almost a third of the Okavango Delta, the Moremi Game Reserve is made up of a huge variety of landscapes including pans, floodplains, grasslands, lagoons, savannahs and woodlands. As a result of the extremely variable habitat, the diversity of both wildlife and birdlife is excellent. Moremi is among the best game reserves in Africa for viewing the endangered African wild dog, as well as cheetah, leopard and lion. Over 500 bird species can be found, as well as 1,000 species of plant. It is because of the local Batawana people that this area was protected in 1963, making it the oldest and first protected reserve of the Okavango Delta. As a sign of gratitude, it is named after the tribe members, Chief Moremi III and his wife.

Sandwiched between Moremi Game Reserve and Chobe National Park, the Khwai Concession is spread over 1,800 square kilometres on the north-eastern fringes of the Okavango Delta. This large area is made up of diverse habitats such as Mopane forests, savannah, sweeping grasslands and floodplains with lagoons. Around 400 San Bushmen reside in Khwai, and they are actively involved in conservation activities in the reserve. The Khwai Concession is home to rare wildlife including roan and sable antelope, alongside large herds of migrating elephant, lion, hyena and African wild dog. With no fences separating Khwai from its larger neighbouring parks, the game can roam freely and you are likely to see just about everything that northern Botswana has to offer. This concession is run by the members of the Khwai Village community and extends from their village to Mababe village to the east. As well as game drives, boat rides are a common activity in the Okavango Delta. A mokoro is a type of dugout canoe, propelled through the shallow waters of the delta using a ngashi pole. Traditionally, the canoes were carved out of ancient Delta trees, but nowadays they are made from environmentally friendly fibreglass. During boat rides you are guided through the channels of the River Khwai with the chance to spot the African fish eagle, hippo, crocodile and elephant.

Savuti forms the border between Chobe, Linyanti and Moremi, which all lead to the Okavango Delta. Spread over 10,878 square kilometres, it is most well-known for the dry riverbed which runs for 100 kilometres from the Chobe River to the Mababe Depression. This desolate landscape was once submerged beneath an enormous lake which is believed to have formed from the Upper Zambezi, Chobe and Okavango Rivers flowing together across the north of Botswana.

Unlike the vast majority of Botswana, Savuti is not a completely flat landscape. The vegetation is very similar to the Kalahari, with large outcrops of volcanic rock reaching up out of the sands, towering over the savannah and rolling grasslands. The wide-open country makes for excellent game viewing opportunities, and it is undoubtedly the dramatic wildlife interaction that makes the Savuti region so spectacular. The Savuti marsh is prime cheetah country and it is not unusual to also see wild dog, leopard and hyena roaming here. During dry season, sightings of warthog, kudu, impala, zebra and wildebeest are common, whilst the rainy season brings over 450 bird species. Thousands of doves and sandgrouse come down to drink in the morning, under constant surveillance by kites, eagles and other birds of prey.

Read our blog to find out what to expect on safari. 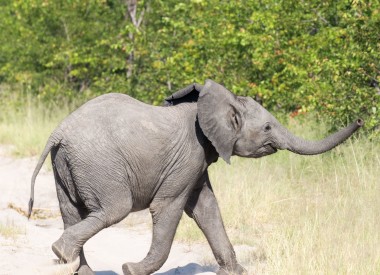