Santiago is the cultural, social and economic hub of Chile. The city boasts an incredible backdrop of snow capped peaks of over 6,000 metres, and the surrounding vineyards produce some excellent wine.

Santiago was founded in 1541 by Pedro Valdivia after he was despatched to look for more territory for the Spanish crown by Francisco Pizarro, who had recently conquered Peru. A small settlement was soon built but was almost just as quickly razed to the ground after being attacked by the indigenous Picunche people. The town was soon rebuilt and gradually Santiago developed into a colonial capital.

For a long time it remained a backwater town with many Spaniards deciding to look elsewhere on the continent for their riches. However, by the 18th century, the city had become more prosperous as a result of a lifting of trade restrictions. After Chile’s independence in 1818, the population increased considerably and many buildings were erected around this time.

The modern city itself is a blend of the old and new. The centre retains many of the city’s historic buildings, but outside of the centre, Santiago has become a city of gleaming steel-and-glass skyscrapers, with an incredible level of building taking place in recent years. Although this means that the city can feel somewhat sterile, it has excellent facilities, and the historic centre still retains much charm.

Read our blog to discover 6 Things to Do in Santiago. 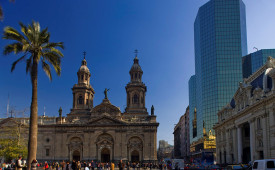