Visiting the Villa Blanca Cloud Forest takes visitors deep into one of Costa Rica’s most beautiful natural gems. The abundant high-altitude forest here seems to grow amongst the clouds, providing homes to a wide variety of plants, insects, birds and mammals, which thrive thanks to the minimal human impact on the area. Despite its proximity to the capital of Costa Rica, San Jose, the cloud forest here maintains an isolated feel, and a holiday here has people feeling serene and in touch with nature in no time.

The Villa Blanca Cloud Forest Hotel and nature reserve is a lovely hotel offering a boutique experience in a stunning setting of isolated, undisturbed cloud forest. Designed to imitate a traditional mountain village, accommodation is offered in stand-alone casitas with en-suite bathrooms and living rooms, a wood-burning fireplace a mini-bar and complimentary coffee. There is an on-site spa, a restaurant and an adjacent bar. It is the only hotel in the area so visitors can enjoy uninterrupted views of the pristine cloud forest. With a strong emphasis on ecotourism, Villa Blanca works in harmony with conserving nature, culture and the community.

The landscape within the Villa Blanca reserve is covered in lush green vegetation, with mossy undergrowth, tropical flowers, hanging roots and tall tree canopies. Amongst all this growth visitors will certainly be treated to wonderful bird-sightings – there are over 258 species found in the reserve, ranging from brightly-coloured trogons and hummingbirds, to toucans and bellbirds. There are also stable populations of howler monkeys, white-faced monkeys, sloths and coatimundis. Together, these birds, insects and mammals create a forest soundtrack which you are unlikely to experience in any urban environment. To find out more about the Costa Rica wildlife, read our blog.

To enjoy the Villa Blanca reserve, a number of walking trails have been established on the property ranging from 1.25 miles to 2.5 miles. These can be enjoyed during the day, or at night, when some of the shyer species emerge. There is also a canopy system in place and horse-riding can also be arranged. The Day & Night Cloud Forest excursion is a truly special way to witness how the cloud forest changes, revealing a different side of itself depending on the time of day. In the morning, there is a two-hour walk through the cloud forest, looking for toucans, hummingbirds, monkeys and sloths as well as plants including orchids and bromeliads. In the late afternoon, there is another two-hour walk along the trails, with a soundtrack of nocturnal species. 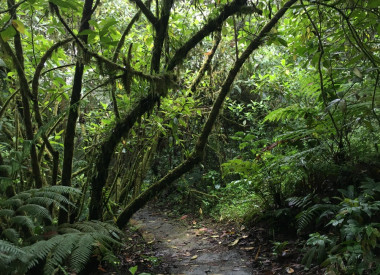