The Colca Canyon is a beautiful part of Peru offering stunning scenery and one of the best opportunities to see giant Andean condors in the wild.

The Colca Canyon is located about four hours from the city of Arequipa in the south of Peru. The route to the Colca Canyon offers amazing views of the nearby volcanoes and a good opportunity to see vicuña (a relative of the llama) in the wild.

Originally, the area was inhabited by the Collaguas and the Cabanas, and the Incas also occupied the area for a short time. The Collaguas were an industrious and prosperous people, and the terraces throughout the canyon indicate their agricultural and architectural skills. When the Spanish occupied the valley in 1540, Viceroy Toledo ordered that the population, which had been dispersed throughout the valley, be gathered into fourteen villages, which survive today. This made it easier to control and tax the inhabitants.

The Colca Canyon runs for over 100km, and the average distance from the peaks of the mountains to the river below is 3,400m. Until recently, it was thought that it was the deepest canyon in the world, although it is now generally accepted that the Cotahuasi Canyon, also in the department of Arequipa, is deeper. The depth of the canyon from the Cruz del Condor to the river is approximately 1,500m. The deepest point of the canyon is beyond Cabanaconde, close to the Valley of the Volcanoes.

In addition to the canyon, the area is one of the most volcanically active in Peru, and Sabancay, which erupted in the 1980s, can usually be seem smoking, as can Ubinas.

The Colca Canyon was largely inaccessible until the 1970s, when a road from Arequipa was built as part of the Majes irrigation project, which diverts water from the Colca River to the agricultural area of Majes. In fact, the valley was largely forgotten throughout the Republican period, and the inhabitants lived in almost total isolation. The villages, which have changed little since Toledo's decree, are now in regular contact with the rest of Peru, and the area is visited by many thousands of tourists every year.

If you would like to see condors in the wild, request a free brochure to find out more. 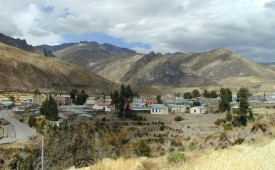 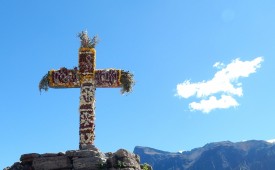