Cusco is a beautiful colonial city with many wonderful churches and courtyards. However, the importance of the city was greatest before the arrival of the Spanish, when it was the capital of the Inca Empire – the most important city in an area stretching from Colombia to Argentina. In recent years the city has once again regained its important status, this time becoming the capital of Peru's tourism industry. However, even in this city throbbing with tourists, it is relatively easy to escape the crowds by walking up one of the quiet side streets.

There are several legends relating to the founding of Cusco and the Inca Empire. The most common is that Manco Capac and Mama Ocllo, the male and female founders of the Incas, were sent by the sun and moon gods to Lake Titicaca. From there, they began looking for the right place to found their kingdom. When they arrived at what is now Cusco, Manco Capac plunged his staff into the ground, revealing its fertility, and Cusco, ‘the navel of the world', was founded. It is likely that this legend has some basis in reality, as Quechua, the language of the Incas, was spoken by the Ccolla, or Quechua, people from near Lake Titicaca. These were responsible for the creation of the impressive funerary towers at Sillustani near Puno. It is therefore possible that the Incas originated from the Lake Titicaca area after the fall of the Tihuanaco Empire.

The Inca culture began around 1100AD, although for several centuries it was no more than one of many middling-important cultures in Peru. However, around 1430, the Incas were involved in a war with the Chancas, a northern tribe. Viracocha, the 8th Inca (the name Inca actually refers only to the leader of the people), appeared on the point of being defeated. However, an Inca general seized victory in a decisive battle, and a legend claims that the rocks of the mountainside gained life and fought alongside the Incas. Having defeated the Chancas, the Inca general took power and declared himself to be the 9th Inca, taking the name Pachacuteq, meaning transformer of the universe. Living up to this title, Pachacuteq began upon one of the most rapid military and political expansions in the history of the world, conquering much of the Peruvian coast and highlands, and converting Cusco into a magnificent city of fine stone architecture. It is said that Cusco had the shape of a puma, with Sacsayhuaman as the head of the beast.

There is now some dispute as to whether the Inca expansion really exploded in such a dramatic fashion with Pachacuteq. Archaeological evidence seems to indicate that some of the growth of the Inca culture, especially in the area close to the Cusco valley, happened long before the rise of Pachacuteq. However, it is generally accepted that the main expansion of the Inca Empire did take place in the mid-15th century under Pachacuteq.

Pachacuteq's son, Tupac Yupanqui, carried on with the growth of the empire, expanding into what is now Ecuador, Colombia, Bolivia, Chile and Argentina. His son, Huayna Capac, also carried on the expansion, although on his death in 1527 (quite possibly of a European disease brought by the Spanish, which swept south from Mexico) a civil war broke out in the Inca Empire. The Quito-based faction, under the leadership of Atahuallpa, Huayna Capac's illegitimate son, fought against Huáscar, the legitimate Inca based in Cusco. On the defeat of his half-brother in 1532, Atahuallpa began to march to Cusco. However, he only got as far as Cajamarca, in Peru's northern highlands, before being met by the Spanish conquistadors.

The Spanish had first landed in Peru in 1527, having heard tales in Mexico of wondrous riches and an amazing empire to the south. The conquistador Francisco Pizarro arrived in Tumbes, where he became even more excited by the prospects of conquering a new kingdom for the Spanish crown, and for his own wealth. He returned to Spain to gain authorisation for the conquest, and returned in 1532, along with 168 men.
When Atahuallpa met the Spanish conquistadors in Cajamarca in 1532, he was initially open to them, although the treachery of the Spanish resulted in his capture and imprisonment. In exchange for his freedom, Atahuallpa offered to fill a large room once with gold and twice with silver. The Spanish readily accepted this offer, although there were no plans to free the leader when the Inca's side of the bargain had been fulfilled.
The first Spanish to visit Cusco were in fact men from Pizarro's group, sent from Cajamarca to speed up the collection of treasure. Pizarro and the majority of his men did not arrive in Cusco until 1533, after they had executed Atahuallpa. They marched on the Inca capital, gaining support from many of the tribes that had been conquered by the Incas and resented control from Cusco. This, the superiority of Spanish armour and weaponry, and the Inca's lack of defence against horse-mounted attacks, helped the Spanish defeat the opposition they encountered.

When the Spanish arrived in Cusco they seized control quickly and began to strip the city of its treasures. They installed a puppet leader of the Inca people, Manco Inca, another of Huayna Capac's sons. However, despite the Spaniards' hopes that Manco Inca would appease the indigenous population, and the initial support for the Spanish by many of the tribes conquered by the Incas, support for the conquistadors did not last very long. In 1536, Manco Inca rebelled and led an Inca army to fight the Spanish. He quickly captured Sacsayhuaman, near Cusco, and started attacking the city, setting its thatched roofs on fire. The Spanish in the city, realising their desperate plight, decided to counter-attack. In a fierce battle, they managed to wrest Sacsayhuaman from the Incas, who fled to Ollantaytambo in the Sacred Valley.

Although the Incas continued to fight, the arrival of Spanish reinforcements from other Spanish colonies in the Americas changed the odds. Manco Inca, realising that he could not defeat the Spanish in open battle, fled to Vilcabamba in the jungle. Although the Inca still harassed the Spanish with guerrilla tactics, control of Peru was firmly in the hands of the conquistadors. Inca resistance finally suffered a deathblow when a group of disgraced Spaniards, to whom Manco Inca had given refuge in Vilcabamba, murdered the Inca in an attempt to regain favour with the Spanish rulers. Although first Titu Cusi, Manco Inca's son, became the new Inca, and then, after his death, Tupac Amaru took over the role, the Spaniards became determined to end the Inca resistance once and for all. They hunted Tupac Amaru down, capturing Vilcabamba, and finally the Inca himself. He was taken to Cusco, where he was beheaded in the main square in 1572.

Although Cusco continued to be an important town for the Spanish, and many fabulous churches were built there, its inaccessibility in the highlands meant that its strategic importance diminished significantly. From being the capital of an empire that stretched for thousands of kilometres, Cusco became just another outpost in a Spanish Empire ruled from Lima. However, its importance for the indigenous population never disappeared. In 1780, José Gabriel Condorcanqui, who claimed to be a direct descendant of Tupac Amaru, the last of the Incas, took up the name Tupac Amaru II, and rose up against the tyranny of the Spanish rulers. He took prisoner a local Spanish ruler, renowned for his cruelty, and publicly executed him. This led to the start of an uprising from all over the highlands, which came closer to ending the Spanish rule in Peru than any other rebellion since Manco Inca's death, over 200 years beforehand. However, in 1781, the Spanish managed to capture Tupac Amaru II, and executed him and his family in Cusco's main square, just as they had his forebear 209 years earlier.

Since Peru's independence, Cusco has remained an important town, although, until the arrival of tourists, it was a rather poor one, reliant mainly on agriculture. There are some indigenous Peruvians who feel that Peru's true capital is still Cusco, and pride in its Inca heritage re-emerged strongly in the latter half of the 20th century. The official name of the city is now Qosqo, closer to the Quechua pronunciation of the Inca city's name, and the Inca flag can now be seen throughout the city. The re-enactment of the Inti Raymi festival, discontinued after the capture of Cusco by the Spanish, was reintroduced in 1944.

For modern day visitors to Cusco, the city is a beautiful place to explore, and it makes a wonderful base from which to visit the many nearby attractions. The city has some fine hotels and good restaurants, and has the best services in the country outside of Lima, and there are many fine crafts from the surrounding areas for sale in the city.

Read our blog to find out our Top 8 Things To Do In Cusco. 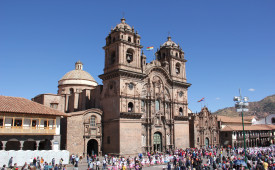 Monastery of Santo Domingo and Qorikancha 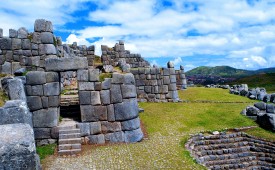 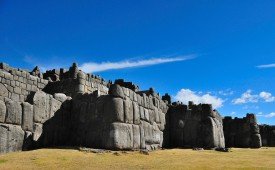 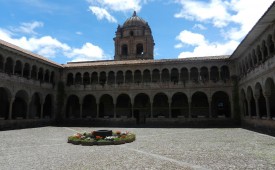