Trujillo is Peru’s third-largest city, and was also one of the first to be founded by the Spanish. When Pizarro founded the city in 1534, he named it after his hometown in Spain. It is the capital of the La Libertad department, an important sugar cane growing area. The area around Trujillo was important long before the arrival of the Spanish, and the Moche valley was the origin of the Moche culture, one of the most important in the history of Peru. The Chimú culture emerged when the Moche culture died out, and built Chan Chán, the largest pre-Hispanic city in Peru. Although the Spanish saw the walls of the city when sailing along the coast, Chan Chán had been abandoned before their arrival, as the Incas had transferred the Chimú population to a new city as punishment for their resistance to Inca rule.

The city grew in importance during the colonial period as a result of agriculture, and there are still many fine colonial houses and churches in the city. However, the city also rebelled against Spanish rule, and declared its liberty from the crown before the rest of Peru.

Trujillo remained a centre for resisting central authority, and the city became the centre of the left wing APRA (American Revolutionary Popular Alliance) political movement in the 1920s. The APRA founder and leader, Victor Raúl Haya de la Torre, who was from Trujillo, claimed victory in the elections of 1931, although General Sánchez Cerro won the count. Claiming fraud, APRA supporters in Trujillo rose up in protest against the new government, and went on the rampage, killing many officials. In a brutal crackdown, the government arrested many of these supporters, took them to the ruins of Chan Chán, and executed hundreds of people. Haya de la Torre was imprisoned on the notorious El Frontón island and the APRA party was outlawed. The current president of Peru, Alan Garcia, is from the APRA party.
Trujillo is an elegant, attractive city, and it makes an excellent base for visiting the nearby archaeological sites. Although there is the occasional whiff of fishmeal from the nearby factory at Puerto Salaverry, this is rarely troublesome.

Trujillo has quite an interesting colonial centre with many churches and mansions. The whole centre used to be walled, and Av. España now marks where the wall used to stand. There is a section of the wall still standing on the northern part of Av. España. The large Plaza de Armas is surrounded by attractive colonial buildings with beautiful wooden balconies. There is an impressive statue of La Libertad (freedom) in the centre of the Plaza. The churches are quite different from some of the more ornate examples in Lima, Arequipa and Cusco, for example, and the facades are rather austere. The most interesting church is the Iglesia del Carmen, which has a small gallery of colonial art, the Pinacoteca Carmelita. The church and museum are open Monday to Saturday from 9am to 1pm.
Trujillo has many elegant colonial mansions, including the Casa Banante and the Casa de Emancipación, which is used for exhibitions.

The Trujillo Museo de Arqueología, Antropología y Historia is housed in the elegant Casa Risco, a colonial house built in the early 18th century. This charts the development of pre-Hispanic cultures in northern Peru, especially the Moche, Chimú and Inca cultures. There are plenty of ceramics and some good explanations. The museum has a particularly good section on the Huaca de la Luna, with a large-scale model of the Huaca and artefacts found at the site.

The Museo Cassinelli has a very interesting collection of ceramics, although it is not really a museum. There are 2,000 pieces on display, piled from floor to ceiling in one room with flickering neon lights. The museum actually has a collection of 8,000 pieces, although there is no space to exhibit most of these. Although there are plans for an ambitious museum, there is a lack of money for the expensive project and it does not look likely that it will be realised. Although the collection that can be seen is badly displayed, there are some very good pieces and it is worth visiting. The lack of information on the pieces is more than compensated by the caretaker of the museum, who will guide you giving thorough explanations, although many of these sound a bit far fetched. The collection includes ceramics from the Chavín, Chimú, Moche, Inca, Virú, Salinas and Cajamarca cultures.

The Museo de Zoología has two rooms of stuffed animals. 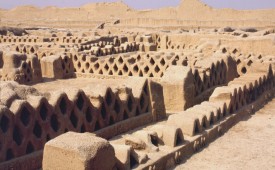