This city steals hearts and it’s easy to see why. Table Mountain cuts a striking figure above the city centre, enveloping the central business district and its nearby suburbs, while the beaches are picture perfect – although icy Atlantic water is not ideal for swimming unless it’s very hot.

The mountain provides a beautiful city backdrop and a major reason why holidays to Cape Town are so popular. Rotating cable cars travel to the top in roughly five minutes, offering views across the city, the harbour and ship-dotted Table Bay. At the top you get the views, as well as the interesting indigenous plants, known as fynbos, and the small rock hyraxes, birds and tortoises which live on the mountainside.

In the centre, the V&A waterfront is a contemporary shopping and entertainment development comprising restaurants, shopping centres, bars, cafes and leisure facilities. The old Malay Quarter (Bo-Kaap) is renowned for its colourful buildings and rich history, with a mixture of Malaysian, African, Indian and Sri Lankan cultures dating back to the 16th and 17th centuries  when slaves were brought over by Dutch imperialists. Growing only indigenous South African plants, Kirstenbosch National Botanical Garden is known for its diversity of flora, with a picturesque setting against the eastern slopes of Table Mountain.

Also visible from the city is Robben Island, the prison-island where Nelson Mandela was incarcerated for 27 years. The island is now a fascinating museum, accessed via a short ferry ride from the Cape Town Waterfront.

The Cape Peninsula is a striking Cape Town feature, dotted with interesting sites all the way around it. Boulders Beach is a national reserve, protecting a breeding colony of around 3,000 endangered African Penguins.

Further south is Cape Point, where the Indian and Atlantic Oceans meet. There is a nature reserve here with deer and sometimes zebra, as well as the old funicular, beautiful beaches and some pleasant walks. Around the point you’ll find the scenic Chapman’s Peak Drive, an eye-poppingly beautiful coastal road carved into the mountainside. The road ends in the fishing village of Hout Bay, home to a traditional harbour and fishing community – a good place to take a pause, enjoy some fresh seafood, or take a boat ride to Duiker Island. The island is home to a seal colony, and subsequently is brimming with great white sharks and plenty of seabirds. 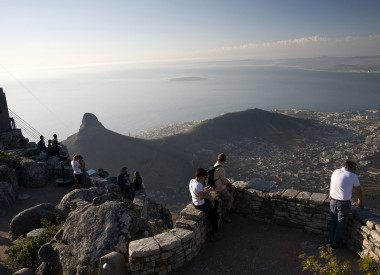