Remarkably preserved in its natural state, Victoria Falls inspires visitors as much today as it did David Livingstone over 160 years ago. In 1855, Livingstone spent the night on Kalai Island a few kilometres upstream before setting off in a small canoe to approach the falls, transported by the local Makalolo people. He landed on the largest island, now called Livingstone Island, from where he got his first view of the falls. In 1857 he said that “No one can imagine the beauty of the view from anything witnessed in England. It had never been seen before by European eyes, but scenes so lovely must have been gazed upon by angels in their flight".

The power of the falls is huge, with over 555,000 cubic metres of water plummeting over the edge every minute. The highest flow on record was in 1958, when it reached more than 700,000 cubic metres per minute. The currents of the mighty Zambezi have cut through the rock faults and fissures, carving out eight successive precipices. The view of the falls would have been very different 1.5 million years ago, and the original Victoria Falls was eight kilometres downstream from where the falls stand today. The Devil’s Cataract, on the Zimbabwe side, shows how the force of the water is starting to cut back along a line of weakness, which will probably erode its way back to form another line of the waterfall.

The Victoria Falls rainforest is an area of dense vegetation, nourished by the constant spray of the falls. This never-ending spray has supported the development of a diverse range of flora and fauna including monkeys, mongoose, warthog and bushbuck.

Read our blog about the Top 5 Things to Do at Victoria Falls. 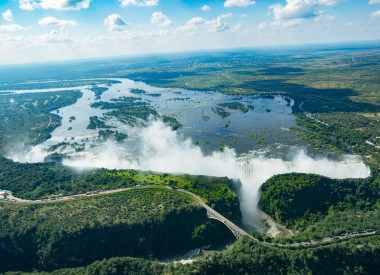