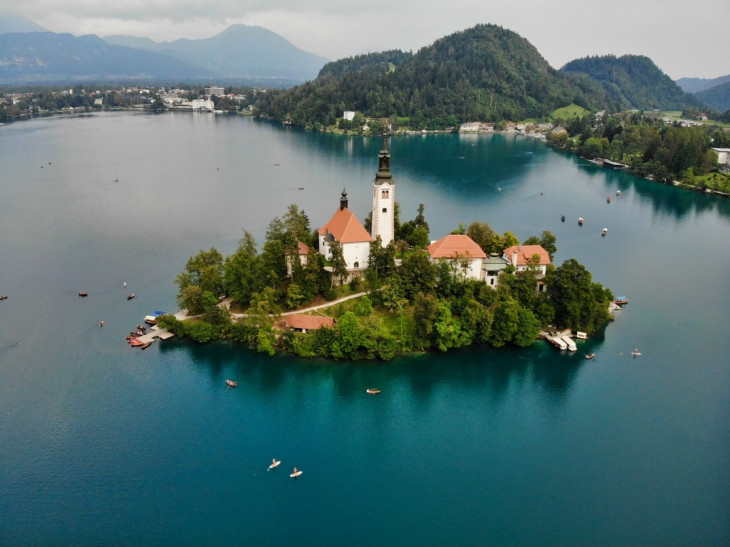 Back in October this year, I was lucky enough to visit the truly stunning country of Slovenia. My last flight out of the UK was way back in January 2020 so needless to say, I was eager to have the opportunity to explore a country that has always been on my bucket list.

Slovenia’s past has seen the country ruled by the Roman Empire, Venetian Republic, French Empire under Napoleon, Habsburg Monarchy and in recent times being a former member of Socialist Yugoslavia before announcing its independence back in 1991 and then joining the European Union in 2004. In recent years, Slovenia has emerged as a tourism destination that more and more people are craving to discover. My week long stay took me throughout the country including the iconic Lake Bled and Lake Bohinj, the Adriatic coastline and last but not least its thriving capital, Ljubljana.

I arrived in Ljubljana airport after a three-hour direct flight with British Airways departing from London Heathrow and was swiftly transferred to my hotel in Bled. I was almost immediately in awe of my surroundings as I checked into my hotel room that overlooked the lake at night, the Bled Castle perched illuminated on the right as Bled Island sat in the middle of the tranquil lake. 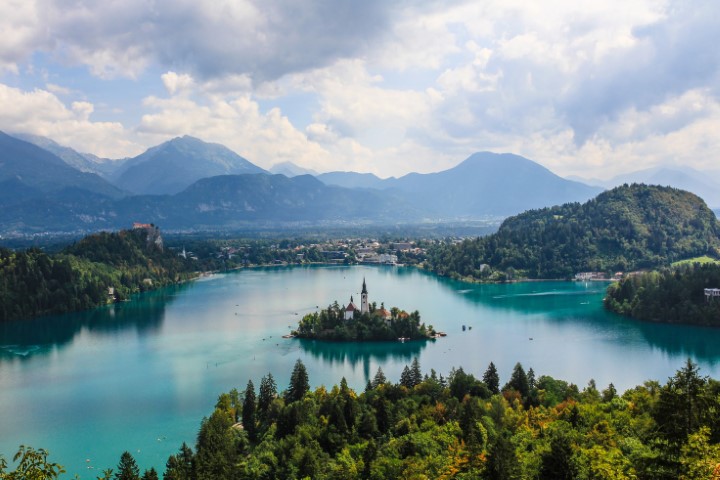 Lake Bled, one of the world's most photogenic lakes.

My Slovenian adventure kick-started the following morning with a short drive through traditional villages to Vintgar Gorge, 15 minutes north of Bled. This striking setting has meandering wooden walkways that took me through the canyon with the emerald green Radovna River running under my feet. Slovenia is scattered with natural wonders and this was the perfect introduction in this area of outstanding beauty. Following the pathways for around an hour and I reached an old roman quarry with a railway bridge running across the gorge at the top. After taking in the sight of Slap Ŝum waterfall, a relatively steep path led to an alpine village called Blejska Dobrava offering unrivalled views of the Julian Alps. This small settlement was dotted with the national flower of Slovenia, the red carnation, which was in full bloom. Another hour passed and the gravelled path looped back round to the car park where we returned back to Bled to take in the views from Bled Castle.

Whilst there is no credible date for the construction of the castle, written notes have been found in a deed of donation signed by German King Henry II way back in 1011. Over many centuries, Bled Castle has traded ownership through various nobles and wealthy merchants and suffered damage from an earthquake and a fire outbreak meaning regular renovation has been key preserving the building for tourism. It’s fair to say the panoramic views from the top courtyard are truly outstanding, accentuated by the clear sky. To set the scene, the deep blue waters were surrounded by luscious green forest, the central Bled Island with the clock tower striking midday and the dominant Triglav Mountain in the background – it’s a moment I won’t be forgetting in a hurry. The grounds are home to a café, restaurant, wine cellar and printing press room, originally inspired by pressing of grapes to make wine. The castle museum contains various Roman artefacts, delves into the history of iron-making and geological history of the area as well as a room dedicated to Arnold Rikli, a Swiss citizen known for putting Bled on the tourism map as a health destination in the late 19th century.

A short drive to the southern part of the lake where multi-coloured Pletna (gondola-like) boats are lined up ready for their short voyage over to Bled Island. The 15 minute boat ride is steered by a local who uses large oars over the calm waters of the lake, it was the perfect opportunity to gaze back up at Bled Castle with the Julian Alps in the background. The island’s origin has a popular myth that it was created by fairies after they were betrayed by local shepherds. It was thought the landscape was formerly a luscious green valley where sheep’s would graze during the day and the fairies would dance at night. However, when the fairies asked the shepherds to stop their flocks from grazing, as the grass was rapidly disappearing, the shepherds refused to listen. The fairies, then decided to fill the valley with vast amounts of water and created a small island in the middle which only they could reach and continue their beloved dancing. After reaching the fairytale-like island, I climbed the steep 99 steps to the baroque-style Church of the Assumption of Mary and didn’t hesitate to ring the wishing bell inside the meticulously decorated building. The clock tower also offers more spectacular views of the surrounding area before tucking into hazelnut and dark chocolate Potiča, the national desert of Slovenia.

Whilst an optional excursion to Lake Bohinj would be on day 3 of the itinerary, I spent the rest of my afternoon over at this remarkable setting on the same day. Located only a 30 minute drive from Bled, Lake Bohinj offers a quieter but equally enjoyable experience to Lake Bled and lies in the heart of Triglav National Park. There are numerous nature trails through the dense forest and picturesque fauna scenery that surrounds the lake as well as great opportunities to swim in the crystal clear waters near the Church of St John the Baptist located right on the shores of the country’s largest lake. 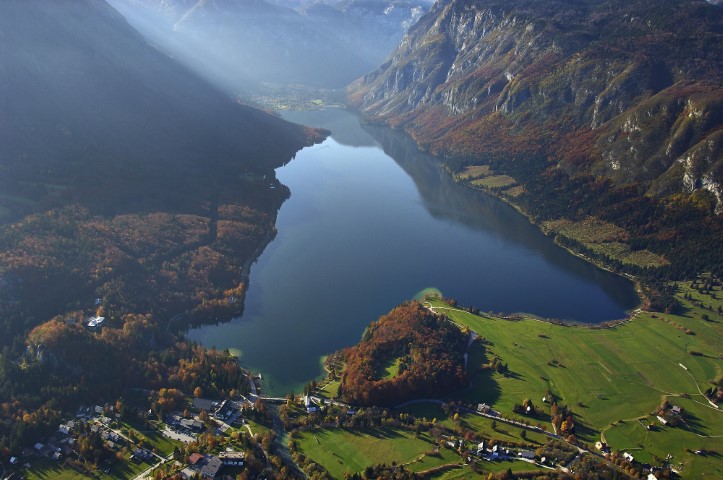 During the rest of my time in Bled, I made it my priority to reach the well-known Mala Osojnica viewpoint which requires a relatively demanding hike up to just under 700m but it must be said the views at the summit are absolutely outstanding. The entire landscape opens up and the photo opportunity couldn’t be ignored, especially as the sun had started to set, the snow-capped mountains made up the horizon and the town of Bled was starting to light up. There is also a pedestrianised path around the entirety of the lake that is worth doing, taking little over an hour in duration. I will never forget my time in Bled, it felt almost dreamlike to be constantly surrounded by such stunning scenery and what feels like an untouched gem.

The following day started with an hour long car journey south to Predjama Castle, a renaissance-style castle built into cave that is listed in the Guinness Book of Records as the largest of its kind in the world. The dramatic structure has an intriguing history with multiple occupants, the most famous of which is knight Erazem of Predjama who fled to the castle after killing the commander of the imperial army during the Habsburgs reign. His time in the castle saw hidden passageways constructed to allow supplies to come in before he was eventually betrayed by one of his own men by a shot from a cannon in his toilet. 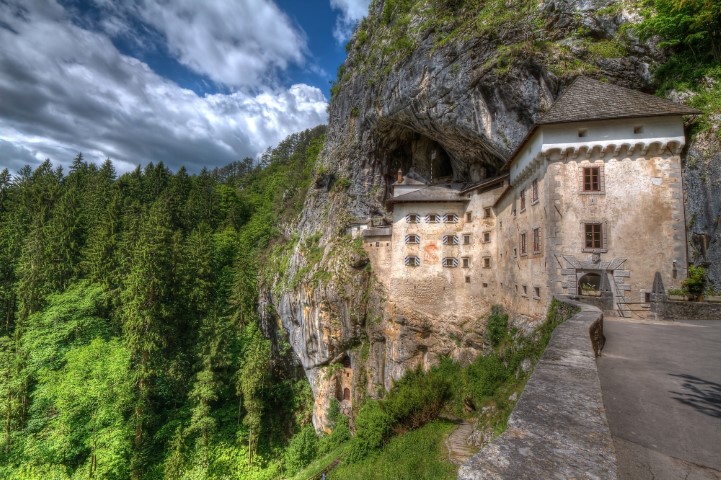 Located a short drive down the road is the equally remarkable Postojna Caves where you ride an electric train into the underground cave system and are met with huge stalagmites, stalactites and other limestone formations. The temperatures dropped to a cool 10°C and the dark setting created an eerie but exciting atmosphere with walking trails taking me through the heart of this subterranean environment which culminated in spotting the ‘baby dragon’ salamander that reside in the cave and can live to over 100 years and can go without food for over 10 years. Before taking the return train journey, I wandered around the Grand Hall which plays host to concerts and performance thanks to its unique acoustics. 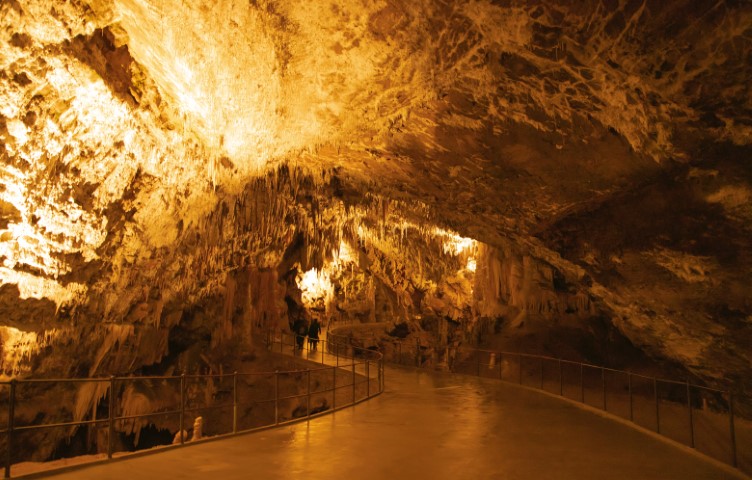 The day continued down south over to the Adriatic Coast, with a pleasant drive arriving in the resort town of Portorož. Unfortunately, my time was limited on the Slovenian Riviera, however, even during the off-season, there was a sense of charm and character to this coastal setting. Portorož is home to variety of different cuisines, with seafood and Italian the most prominent, a plethora of wellness centres for an opportunity to unwind and embrace traditional spa treatments as well as local cruises around the local coastline or even a day trip to Venice by ferry. 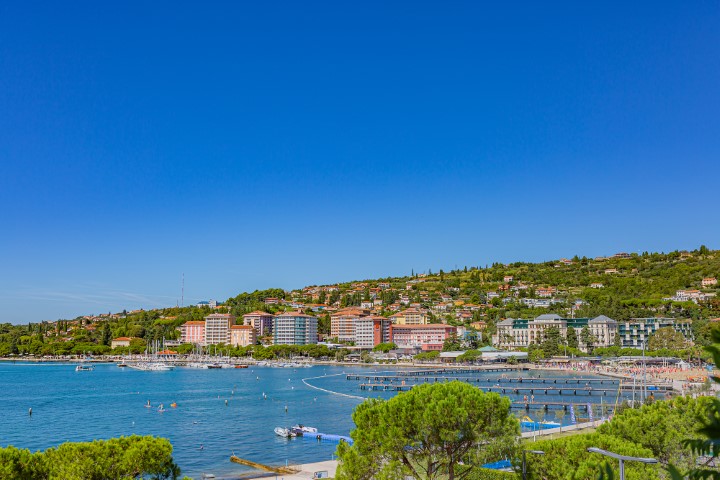 Slovenia’s coastline stretches across 45km so represents a very small part of the country but was a thoroughly enjoyable part of the itinerary with a lively feel to Portorož and the nearby medieval town of Piran. Piran had a vital role in the Venetian Republic thanks to the surrounding, and still operating, salt pans that surround the local area. Wandering around the former walled city felt like taking a step back in time with its cobbled streets, hidden squares and Venetian-style buildings that make up the old town. Whilst I didn’t have time to sample the local food, there were ample seafood restaurants on the waterfront that looked well worth a visit. 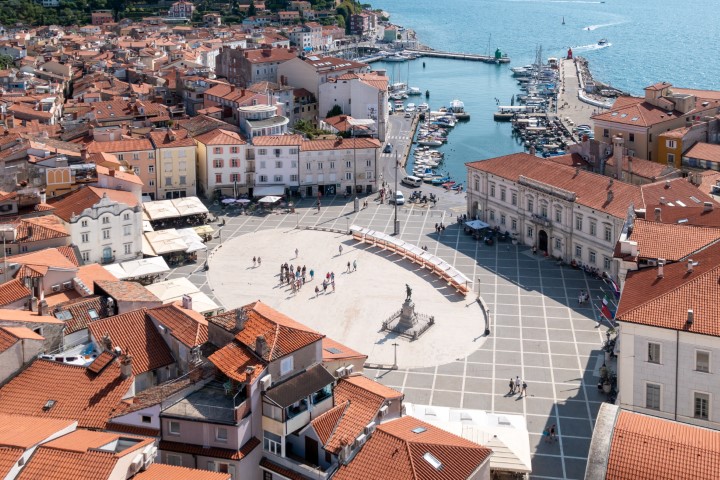 Tartini Square, the largest and main square in Piran.

A 90 minute transfer inland and I arrived in Ljubljana, a capital city bursting with life. The city sprawls over the banks of the River Ljubljanica and boasts a rich medieval heritage, as well as a wonderful selection of renaissance, baroque and art nouveau buildings scattered around the city. I was amazed by the dominant presence of Jože Plečnik, whose architecture runs throughout the city, most notably the Triple Bridge, Cobblers Bridge and Central Market buildings that all compliment the Ljubljanica running through the heart of the city. Other highlights included riding the funicular up to Ljubljana Castle offering panoramic views overlooking the old town as well as the vast green space of Tivoli Park filled with walking trails away from the hustle and bustle of the city. 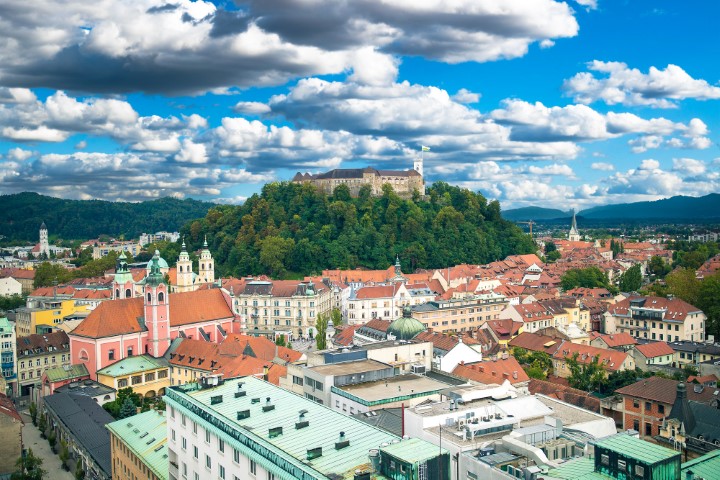 My time in Slovenia came to an unwanted end but I left knowing it would undoubtedly become a popular Llama Travel destination that customers could be visiting from May onwards next year. Slovenia combines remarkable natural wonders with rich, medieval history and the chance to unwind on the beautiful coastline.

We are delighted to announce that our Slovenia holiday is now online, with amazing discounts and flexible booking conditions. Flights from the UK, accommodation and transfers are included in the price.