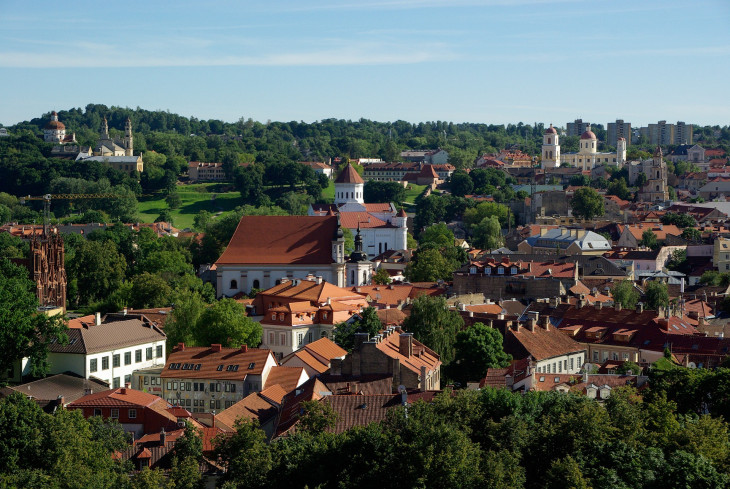 In October 2021 I travelled to three of Europe’s hidden gems on the shores of the Baltic Sea. Lesser travelled than other corners of Europe are the three Baltic countries of Lithuania, Latvia and Estonia. Our Best of the Baltics holiday takes you from south to north, starting in Vilnius, going on to Riga and ending in Tallinn. As with any country, there is more to the Baltic trio than their famous capitals. To list a few of the region’s attractions, there are fairy-tale castles and palaces, endless coastline and vast areas of pristine forest waiting to be explored.

After a short 2.5 hour flight from London, I arrived into Vilnius International Airport. Vilnius is the capital of Lithuania and the largest city in the country. The city’s beautiful baroque architecture and laid-back vibe made it the perfect starting point of my Baltics tour. The flight arrived late at night and my comfortable hotel close to the Old Town ensured I was well-rested for my day of exploration ahead.

The following morning was spent on a walking tour of Vilnius Old Town, a UNESCO-listed world heritage site and one of the best-preserved in Central and Eastern Europe, with almost two thousand medieval, gothic, renaissance, and baroque buildings. My friendly and knowledgeable tour guide started at Cathedral Square which is apt, as this is where in August 1989 almost 2 million people joined hands to form the Baltic Way, a peaceful political demonstration that spanned from Lithuania, Latvia and Estonia. We wound our way through the beautiful cobbled streets passing many churches and places of worship. Vilnius once had one of Europe’s largest Jewish communities until over 90% were tragically killed in the Holocaust. Plaques and murals are now in the area where once the Jewish ghetto stood.

In comparison to the other Baltic capitals to come, Vilnius felt modern but medieval, traditional but innovative and extremely green. It is one of Europe’s greenest cities, with 46% of the city dedicated to green spaces.

30 minutes from Vilnius is the former capital of Lithuania, Trakai. A picturesque town on three lakes, Trakai has distinctive colourful wooden houses. I spent the afternoon at Trakai Island Castle, a striking red-brick medieval castle complex built on an island in Lake Galvė. Built in the 14th century, the castle was home to all the Grand Dukes of Lithuania. The museum inside is fascinating, with exhibitions about the history of Trakai and the Grand Dukes that used to roam the halls. 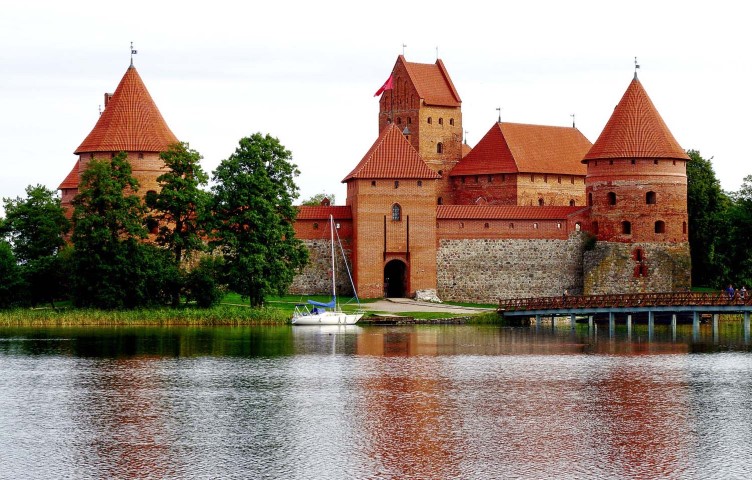 The evening was free to explore the medieval Old Town and beyond. There were many traditional Lithuanian restaurants serving authentic local food. My favourite dish was the national dish, Cepelinai, which are large potato dumplings stuffed with pork, curd cheese or mushrooms. Cepelinai directly translates as ‘zeppelin’ owing to their oval shape. Vilnius has many other options when it comes to dining, from contemporary, bright food courts to dimly lit, atmospheric wine bars. The Station District has recently been billed one of the coolest neighbourhoods in the world and has the contemporary food and drink options to back this up. 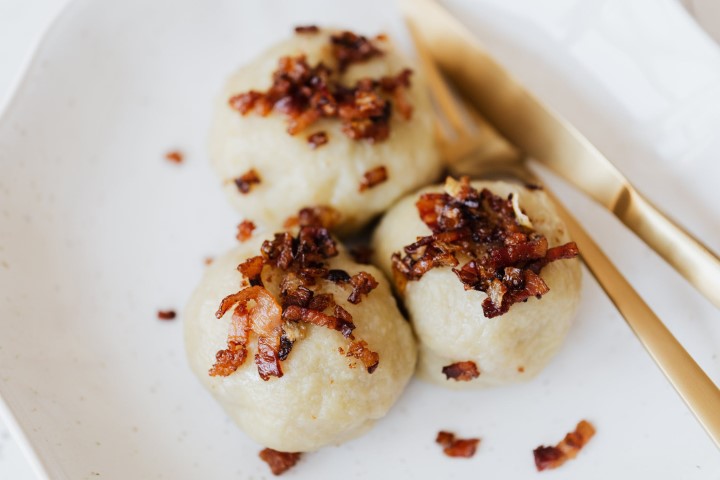 Cepelinai, the national dish of Lithuania.

The following day I left Vilnius behind for the drive north to Latvia. We passed through Soviet-era concrete tower blocks and suburbs before entering a flat landscape that has lush green forest interspersed with farmland and fields of deer. Before crossing the border, I stopped at the Hill of Crosses in northern Lithuania, one of the most curiously fascinating places in all of the Baltics. Standing on a small sacred hill are more than 100,000 crucifixes that serve as both a remembrance of the dead and a memorial of Lithuania’s dark history. 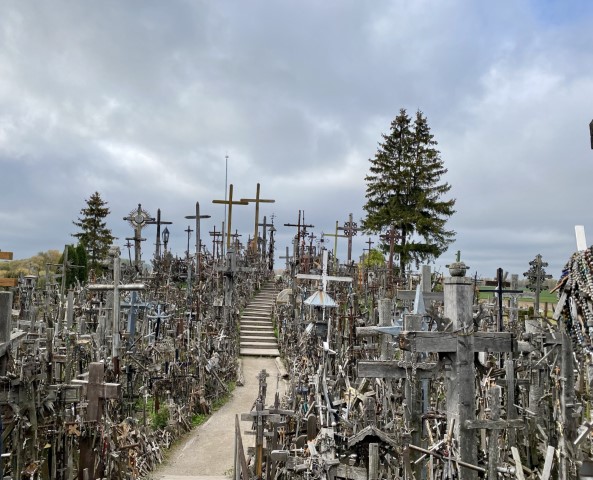 I crossed the border into Latvia and stopped at the impressive Rundāle Palace, an 18th-century baroque style palace with beautiful French-style gardens. Rundāle Palace is an extremely apt first look at Latvia, a country known for its fine architecture of many different styles. 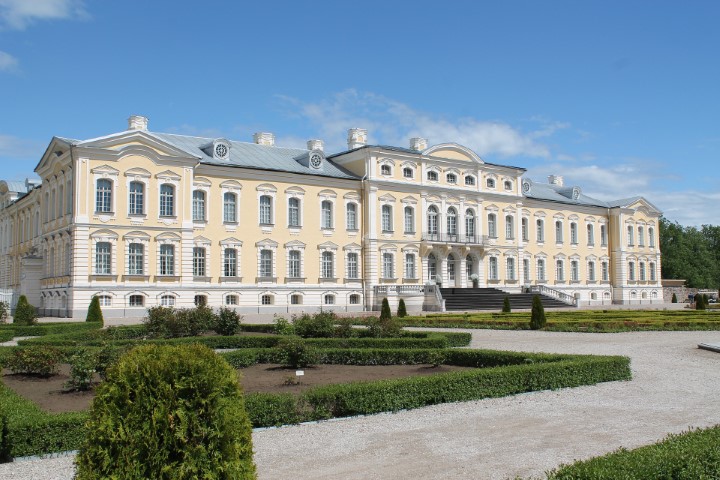 My hotel in Riga was located in the charming Art-Nouveau district in the city centre and a pleasant 20-minute walk to the historic Old Town, where the cobblestone streets are lined with restaurants, cafes and shops. Riga has the highest concentration of Art Nouveau architecture anywhere in the world, with approximately a third of the city’s buildings built in this style.

The following morning, I explored Riga on a half-day walking tour. Riga is the largest of the Baltic cities with its picturesque Old Town and impressive early 20th century Art-Nouveau ‘New Town’ and its many squares and green parks. My guide took me to a variety of the city’s most iconic buildings including St. Peter’s Church, the House of Blackheads, the Sweden Gate and the ensemble of three buildings erected in the Middle Ages referred to as the Three Brothers. I visited the Riga Central Market, the largest market in Europe situated on the banks of the River Daugava. Originally used as First World War zeppelin hangars, they were transformed into what is now the market venues. The market receives an average of 80,000-100,000 visitors every day and was designated a UNESCO World Heritage site in 1997. The market had many fresh fruit and vegetable stalls and many impressive seafood counters, packed with caviar, salmon and other exotic delicacies.  More modern pop-up restaurants, craft breweries and bars have been added in recent times. This was a great place to purchase good to take home or give as gifts, including the local drink, Balsam. Here I got a real sense of Latvian flavours and local life, making it the highlight of my time in Riga. 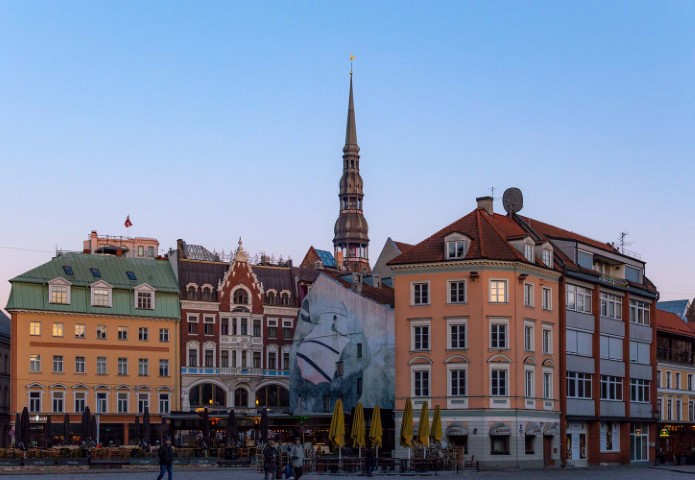 Leaving Riga behind, my journey North took me to Gauja National Park, the largest national park in Latvia. The landscape here went from flat plains to verdant hills and valleys. After walking various trails in the park and visiting a manor house and church on the way, you reach Turaida Castle in the midst of the lush forest. Built in the 13th-century, the red-brick cylindrical tower of Turaida offered great views of the Gauja valley. Driving through the pretty valley we briefly stopped at Gutman’s Cave before continuing on to the impressive Sigulda Castle. Situated atop a hill overlooking the valley both the new and old structures have interesting histories and architecture. 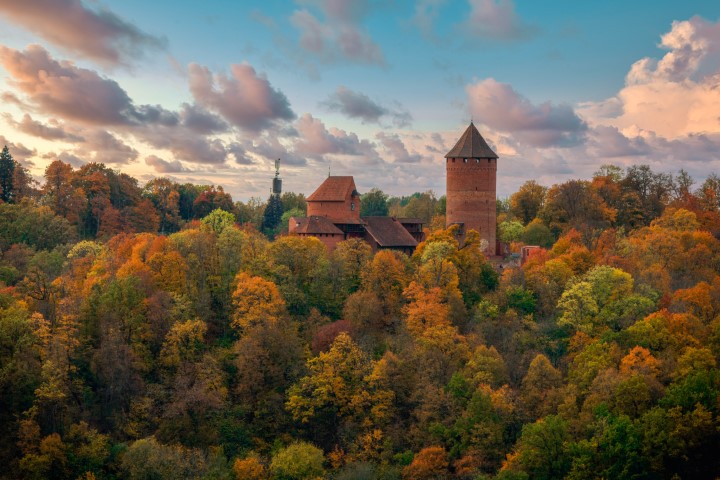 After crossing the border into the final country of the itinerary, Estonia, I stopped in its Summer Capital, the sea resort city of Pärnu. Long, white sandy beaches and a lovely beach promenade are perfect for a relaxed afternoon strolling along the coast before getting back into the hustle and bustle of city life.

I arrived into Tallinn and checked into my hotel located steps away from the Old Town. Similar to the previous two Baltic capitals, Tallinn’s Old Town is also listed as a UNESCO World Heritage Site and it’s not hard to understand why. The vibrant city is famed for its enchanting medieval ambience and photogenic streetscapes.

My last full-day was spent on a morning Tallinn city tour. Atop of Toompea Hill, I visited the beautiful but controversial Alexander Nevsky Cathedral, built in 1900 and the city’s largest Orthodox cathedral. From viewing platforms nearby, you can see why Tallinn is described as a fairytale location, with sweeping panoramic views of the Old Town and its red-tiled roofs, towers, spires, domes and city walls. Descending back into the lower town, the highlight is the famous Town Hall Square with the only surviving Gothic town hall in Europe. From the Town Hall tower at 65 metres high there are more beautiful views of the sprawling Old Town.

After my tour finished, I continued to explore all that Tallinn has to offer. I investigated the Kalamaja neighbourhood, a former industrial zone which has been recently transformed into a contemporary area full of galleries, bars and cafes. But once the sun went down I went back to the romance of the Old Town and the viewing platforms to drink in the cityscape at night. 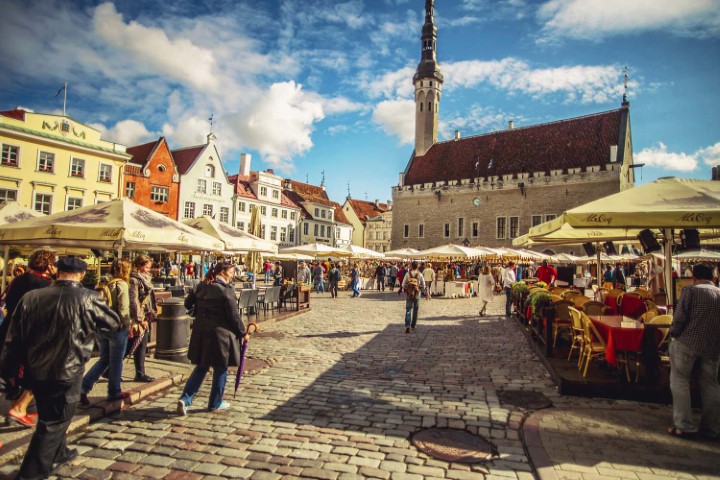 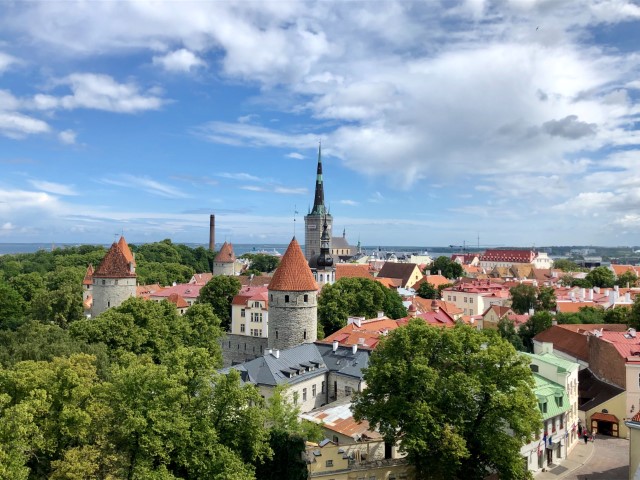 My time in the Baltics had sadly come to an end. Tallinn airport was less than 20 minutes from my hotel and my flight back to the UK was a mere 2.5 hours. For me the Baltic States offer an authentic experience of an often forgotten history of this part of Europe: from their medieval roots to the fight for independence against the Soviets, all while offering a fairy-tale-like experience through forests, lakes and rivers.

All 3 Baltic countries share a similar medieval and modern history, but within them are three completely distinct cultures, traditions and languages. For all their differences, they all offer the perfect mix of UNESCO-listed Old Towns, medieval castles and picturesque natural landscapes. Steeped in history yet very much looking to the future there is much to admire in the beautiful Baltics.

We are delighted to announce that our Baltics holiday is now online, with amazing discounts and flexible booking conditions. Flights from the UK, accommodation and transfers are included in the price.