Damaraland was a name given to the north-central part of what is now Namibia, named after the Damaras who inhabited it. It was bounded by the Namib Desert in the west, the Kalahari in the east and Windhoek in the south. Huge, untamed and ruggedly beautiful, Damaraland is an exceptionally scenic landscape of open plains and spectacular rock formations. This is one of the least populated places on earth, with no fences nor boundaries in the vast, stony desert landscape. It is marked by endless vistas across stark plains, ancient valleys and brooding, distant mountains which bring the traveller in touch with wilderness.

In Damaraland, plants and animals have over millennia evolved side by side with the harsh environment, creating unusual geological features which, together with a wealth of rock paintings and engravings, a population of desert-adapted elephant and rhino, combine to form the unique attraction to this region.

The rock art of Twyfelfontein is estimated to be around 6,000 years old and is one of the largest concentrations of rock art in all of Africa, with around 2,000 rock engravings and some paintings. The engravings comprise of rhino, elephant, ostrich and giraffe as well as drawings of human and animal footprints. They were probably made over a period of 2,000 years by local San hunter-gatherer people, and represent an important aspect of their rituals and beliefs. The UNESCO World Heritage Site is visited on a one-hour tour on the drive from Swakopmund to Damaraland.

Palmwag is located along a palm-lined tributary of the Uniab River, halfway between Swakopmund and the Etosha National Park. Water is scarce in this area, so the river’s presence often lures elephants closer to the camps. It is the ideal base from which to see the sights of the Kunene region. Rhino tracking excursions are an amazing way to discover the beauty of the landscape, and there are a number of walking trails as well as game drives.

Read our blog to find out what to expect on the Rhino Tracking excursion. 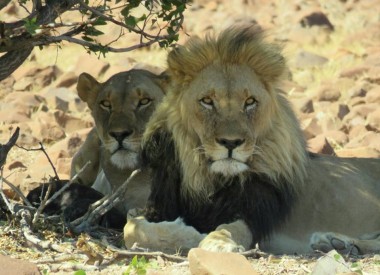