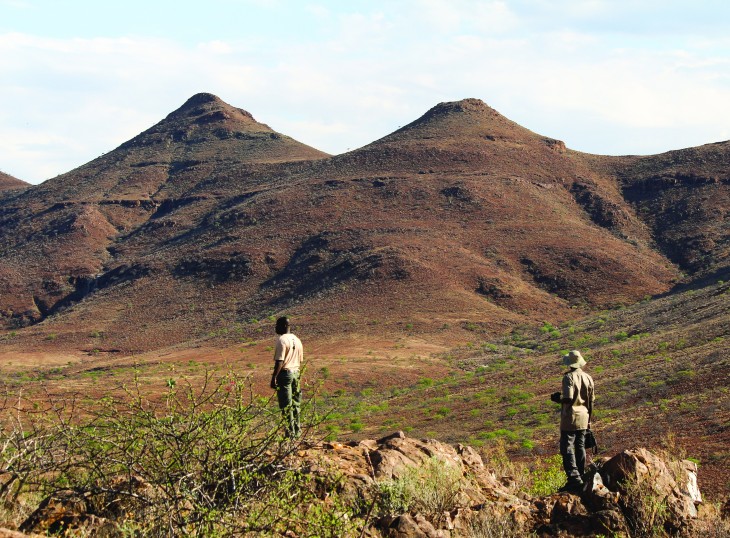 Something I had been looking forward to before I even set foot in Namibia was tracking black rhinos in Damaraland. There are less than 6,000 black rhinos left in Africa, and while they don’t disclose how many rhinos there are in the region in order to combat poaching, there is a sizeable population still in the Palmwag concession, so the chances of seeing them are high.

I arrived at Palmwag Lodge in the late afternoon and that evening we had a meeting from one of the guides who would be with us the following day. They outlined the timings for the coming morning, and went over the important safety points along with what to wear and what to expect. 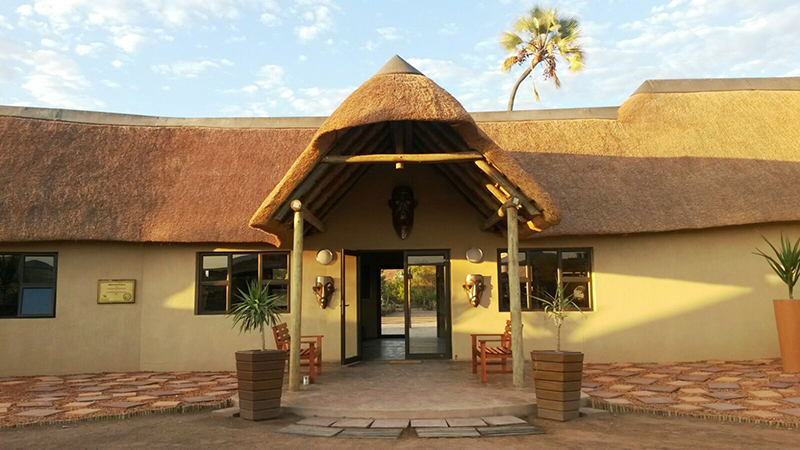 The next morning I was up before sunrise for an early breakfast at 5:30am before we set off into the chilly Namibian morning. I was joined on this excursion by two other guests staying at Palmwag lodge (there could be a max of eight passengers on the excursion), and also a driver/guide and two rhino trackers from the Save the Rhino Trust. As the whole purpose of the excursion is to hopefully spot black rhinos, we were told that even if we spot other animals, we wouldn’t stop, in order to give us as much time as possible to find the rhinos. This meant we spent around 90 minutes driving continuously on bumpy unpaved roads, but the scenery in this part of Namibia is stunning, and this is also one of the least populated parts of the country meaning we saw nobody else. 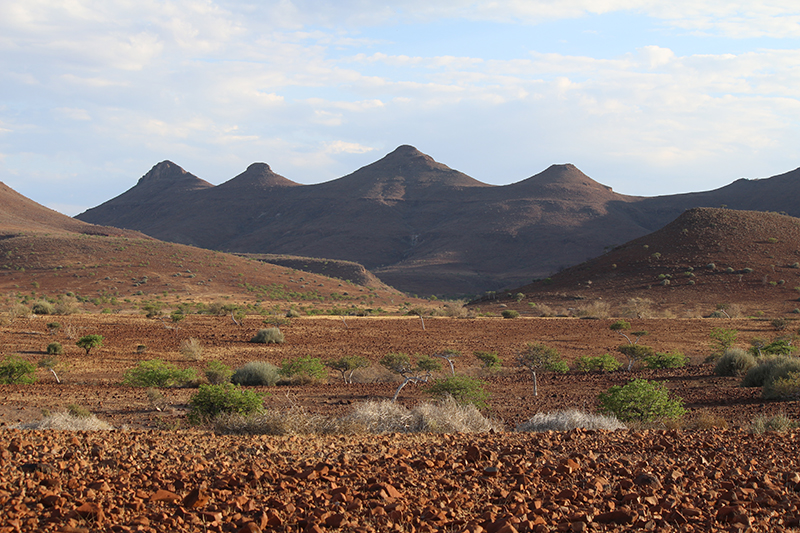 After 90 minutes, the guides found some recent signs of rhino movements and the two trackers got out of the vehicle and continued on foot in order to try and find the rhinos. While the trackers were trying to find the rhinos we stayed in the vehicle until they actually got a sighting, as there was a good chance they wouldn’t find one and we would have to keep looking. 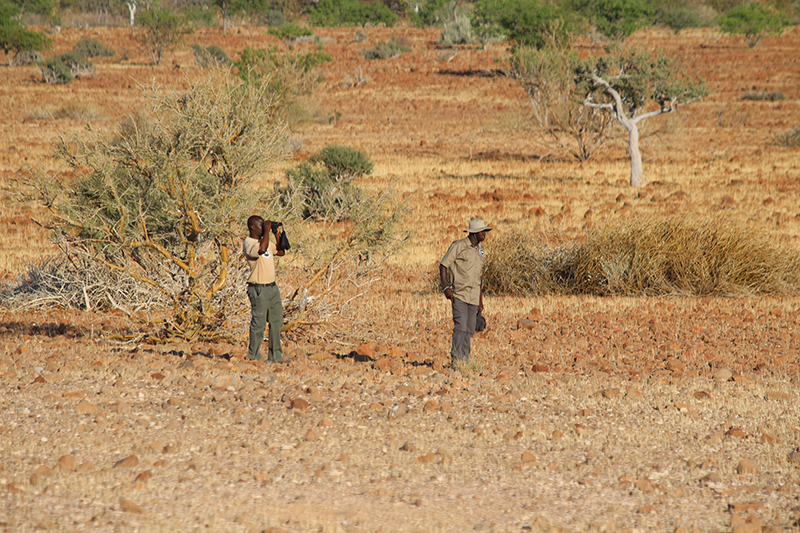 It turned out that we were in luck, and the trackers had spotted a rhino in the distance, so we got out of the vehicle and proceeded on foot in order to try and see it for ourselves. There are of course no paths, so the going is very rocky and uneven and by now the sun was up and already beating down. Despite the landscape not having a huge amount of vegetation, the rhinos are incredibly tricky to spot as they blend in with the rocks and shrubs so well. Without the help of the trackers I would have virtually no chance of seeing them. Luckily, rhinos have notoriously poor eye sight but they have an excellent sense of smell and hearing, so the key to tracking them on foot is making sure to stay downwind of them and being as quiet and still as possible. 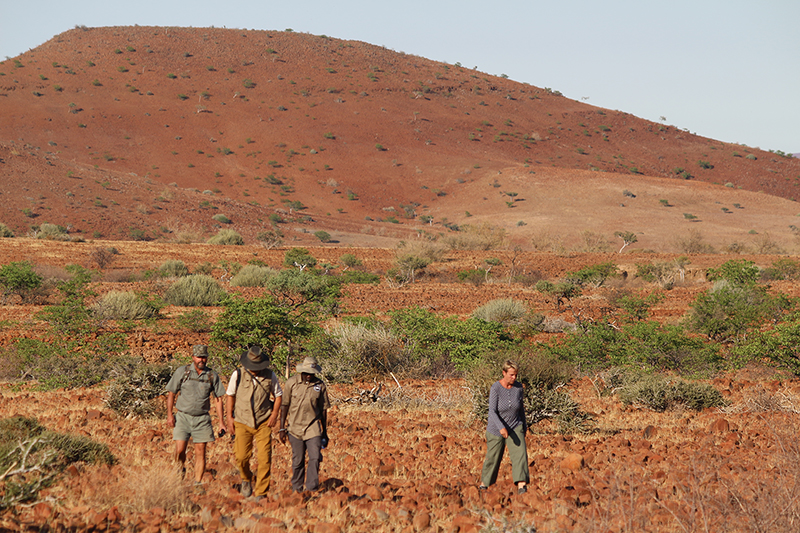 As we approached I still couldn’t see any sign of the rhino, then suddenly one of the ‘rocks’ in the distance moved and there was not one but two black rhinos! We crept closer until we were only around 100 metres away from them, and we hid behind some trees to keep ourselves out of sight. 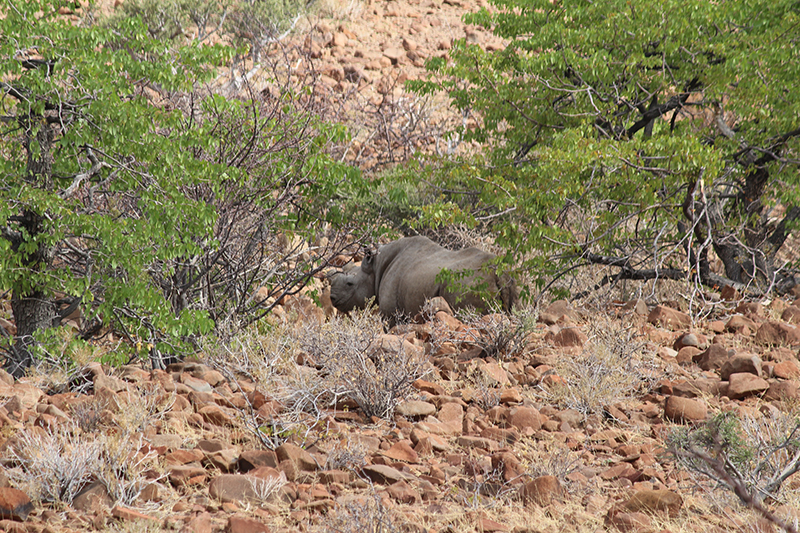 We watched for 15 minutes as the baby and mother quietly fed, before something spooked them and they ran up and over the hill, disappearing from view. 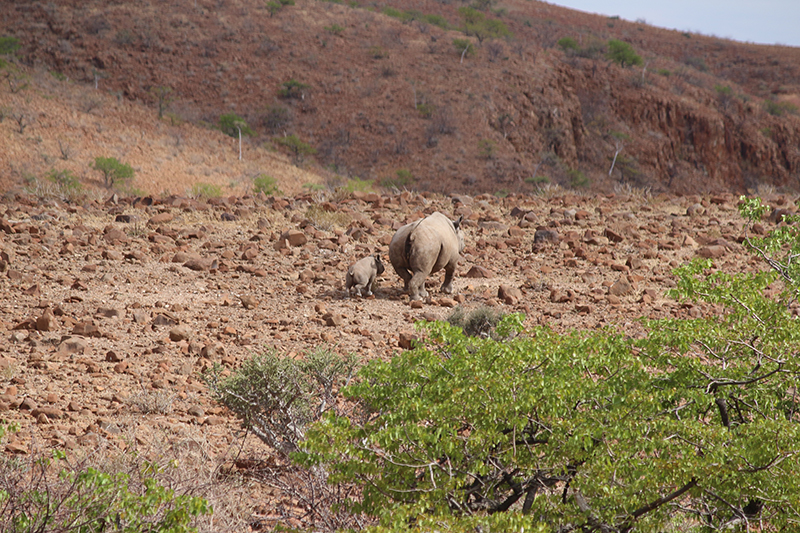 The sight of the mother and calf running up and over the hill is something which will live long in the memory.