Quito is an elegant city in an Andean valley, surrounded by volcanoes and mountains. The city is divided into the colonial old town, made up of beautifully preserved churches and historic buildings, and the modern new town where excellent restaurants, parks, hotels and various attractions can be found. Quito is the starting point for any trip to mainland Ecuador and the famous Galapagos Islands.

Quito, the capital city of Ecuador, sits at an altitude of 2,850 metres above sea level, with a beautiful backdrop of the Andes. It is located in the Pichincha province, in the north of Ecuador. The city is close to the famous equatorial line, which you can visit on a daytrip. Although the city is the capital of Ecuador, it is not the largest in the country (that is Guayaquil on the Pacific coast). Many people use Quito as a base before exploring the rest of the mainland and the enchanting Galapagos Islands. Thanks to Ecuador’s relatively small size and good connections, you can easily get from Quito to the Amazon Jungle, Galapagos Islands, coastline, Andes Mountains, Cuenca and various towns and cities throughout the country.

Inhabited by several tribes during pre-Columbian times, Quito took its name from the Quitus tribe, who lived in the area before the arrival of the Incas. In the mid 15th century, the Inca Pachacutec and his son Tupac Yupanqui extended their empire from Peru in the south, and began conquering Ecuador. By the end of the 15th century, despite fierce resistance by several Ecuadorian tribes, Huayna Capac, Tupac Yupanqui's son, conquered all of Ecuador and parts of Colombia, and Quito was chosen to serve as the capital of the northern half of the Inca Empire. During this period, the Ecuadorian tribesmen assimilated agricultural practices and the social organisation of the Incas, but they maintained their traditional religious beliefs and many customs.

In 1533, the Inca General Rumiñahui destroyed Quito so that it would not fall into the hands of the advancing conquistadors. Just a year later, after the Spanish conquered the Inca, Lieutenant Sebastián de Benalcázar began rebuilding Quito from the rubble and named it San Francisco de Quito. The Spanish promptly established the Catholic religion in Quito, with the first church (El Belén) built even before the city had been officially founded. The Spanish heavily evangelized the indigenous people and also used them for construction, especially in the initial stages.

In 1809 the first proclamation of independence was made, after nearly 300 years of Spanish colonization, in Quito a city of about 10,000 inhabitants. A year later the movement was ultimately defeated, when Spanish forces came from Peru, and killed the leaders of the uprising and about 200 inhabitants of the city. In 1830 the republic of Ecuador was finally proclaimed, and Quito announced as its capital.

Modern Quito is a city of two halves, old and new. The old town remains much the same as it did at the end of the colonial period but the new town bears no marks whatsoever of its colonial past. However, this area has the best hotels and restaurants in the city.

“During my six months living in Quito, I explored the ins and outs of the city, and got to know the places that aren’t on the tourist trail. The thing I love about Quito is the variety of neighbourhoods – in La Floresta you can meet owners of local art galleries and have a coffee in a beautiful old cinema, whilst in Parque Metropolitano you can hike on nature trails with views of Quito.”

Find out our Top Ten Things to do in Quito.

Quito’s historic centre was declared a UNESCO World Heritage Site in 1978, and is a good place to start when exploring the city.

The Plaza de la Independencia (also known as Plaza Grande) is Quito’s main square, containing the cathedral, archbishop’s palace and presidential palace. With a view of the Panecillo, it’s a lovely place to sit in a café and watch the Quiteños (locals) go about their day.

A short walk from here, the San Francisco Monastery contains beautiful paintings and statues, and is one of South America’s largest religious buildings.

Nearby, La Ronda is a famous pedestrianised street lined with artisan galleries, workshops, bars and shops. In the 19th century bohemian artists and poets settled together, rebelling against the bourgeois class.

The Jesuit church of La Compañia de Jesús was the first and best example of Latin American baroque architecture. Behind the elaborate facade, masterly carved out of volcanic rock, there is an ornate and completely gold-leafed interior.

The 3,061m-high Panecillo is a hill on the southern edge of Quito, with a 30-metre-high statue of the Virgin Mary, constructed using 7,000 pieces of aluminium. There is a small museum in the base of the statue, with stairs leading up to several viewpoints boasting panoramic views of Quito.

You can take a guided tour of the historic centre on your first day in Quito. Read our blog for a personal insight.

Quito’s rich history means it has a variety of different museums. Probably the most comprehensive one is the Museo Nacional del Banco Central del Ecuador, where you can learn about pre-Hispanic culture through colonial paintings and sculptures. Another place to see colonial art is The Museum of Colonial Art, which houses an excellent collection. The Alberto Mena Museum is more unique, with a waxwork piece representing the battle of independence. Another interesting museum in Quito is La Capilla del Hombre, which exhibits sculptures and paintings depicting Latin America’s brutal history. Next-door, the artist Oswaldo Guayasamín’s former home has been transformed into a museum showcasing his artwork.

In 2005, a new cable car was built up the Pichincha Volcano which overlooks the city of Quito. The view from the top, at 2,050 metres, is spectacular.

The Mitad del Mundo, which translates as the centre of the world, is where a French expedition in 1736 established the location of the equatorial line from which the country is named. You can take part in various experiments relating to the equator, and learn about the equator in the Inti Ñan museum.

Like many capital cities, Quito showcases some of the best cuisine in Ecuador. For three of our favourite restaurants in Quito, read this blog.

Ecuador is small so day trips from Quito are a great option, whether it’s perusing colourful textiles and jewellery in Otavalo’s world-famous market or spotting rare bird species in the cloud forest.

You can take a one- or two-day excursion to the Bellavista Cloud Forest, where you can spot hummingbirds and follow the nature trails. There is also the option to stay at the luxury Mashpi Lodge in the cloud forest, where activities include bird watching, hiking, swimming in waterfalls a sky bike and a cable car across the treetops.

A trip to Otavalo includes a drive through beautiful Ecuadorian countryside, a trip to the market town where you can haggle for souvenirs at South America’s largest indigenous market, and a visit to nearby attractions including Cuicocha Lake and a condor sanctuary.

If you would like to admire Quito's UNESCO historic centre, and take daytrips to Otavalo and the cloud forest, contact us to plan your holiday to Ecuador. 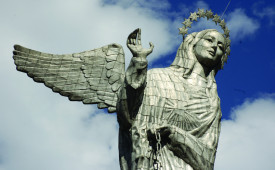 Galapagos Solaris + A Taste of Ecuador

Galapagos Archipel + A Taste of Ecuador