Panama City, capital of the Republic of Panama, is best known for its historic canal, which provides ships with direct access from the Pacific Ocean to the Caribbean Sea. The canal affects many aspects of the city from the architecture in the old town to the continuing financial prosperity of Panama City.

A project that was completed in 1914, the canal was a long time coming, with everyone from the Spanish conquistadors and French to the Colombians recognising the potential benefits it held. It was finally completed by the Americans and remained under control of the US until 1999, when control was handed over to Panama. Today it is regarded as one of the most strategic waterways in the world.

Panama City itself has a strong international feel, thanks to the many financial institutions which have set up shop in the modern town. Business people from around the world are attracted to the city, giving it an exciting fast-paced edge, while the cultural mix lends a cosmopolitan vibe to the whole city. While the city’s population is notable in this area, so too are the high-rises where many of them work.

Wandering the streets here is a humbling experience as you are dwarfed by shiny glass skyscrapers on all sides, however, those same skyscrapers make up a striking skyline when viewed from across the bay on a boat ride on the Panama Canal.

In contrast to the modern area, Casco Viejo, the city’s old town, presents a characterful and more laid back side to the metropolis. A small neighbourhood, the old town is crammed with history. As a throwback to the days of the Panama Canal’s construction phase, there is a mixture of architectural styles from Spanish colonial buildings to French and Antillean buildings, all easily observed on a stroll through the pretty cobbled streets. Here one cannot help but marvel at the development this city has undergone as a result of the famous canal. 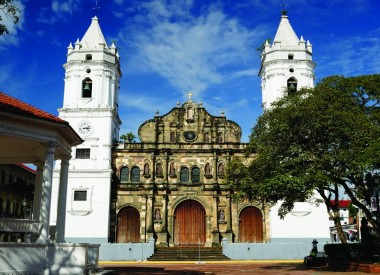