Once known as the “Jewel of Africa”, Zimbabwe’s turbulent past can be seen in the ruins of ancient African kingdoms and the legacy of British culture. The Zimbabwean people have managed to retain much of their roots and ethnic identity, and the culture is incredibly diverse as a result of the many different indigenous groups which call the country home. Today, the service in Zimbabwe is excellent, and the people you meet are incredibly welcoming and hospitable.

During the 13th and 14th centuries, Zimbabwe was the seat one of the greatest African civilisations, and was inhabited mainly by Bantu tribes who came from the north. During the 1800s, it underwent a period of colonisation at the hands of the British, who were intent on seizing Zimbabwe’s rich mineral resources. Sadly, at the turn of the 21st century, Robert Mugabe’s policies triggered a decade of violence and mass unemployment. Since 2017, political stability is returning and many visitors flock to this former British colony to see the Big Five, diverse landscapes and culture.

In terms of landscapes, Zimbabwe is made up of national parks, mountains, rivers and towns, and is home to various UNESCO World Heritage Sites. Forming the border between Zambia and Zimbabwe, the spectacular Victoria Falls are the largest waterfalls in the world, based on the sheer volume of water that passes into the gorge. The waterfalls drop over 100 metres into the Zambezi Gorge, and have been recognised as one of the Seven Natural Wonders of the World. The falls can be admired by walking along a boardwalk with viewpoints. 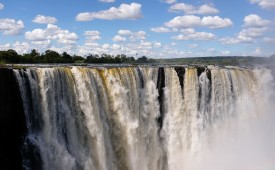