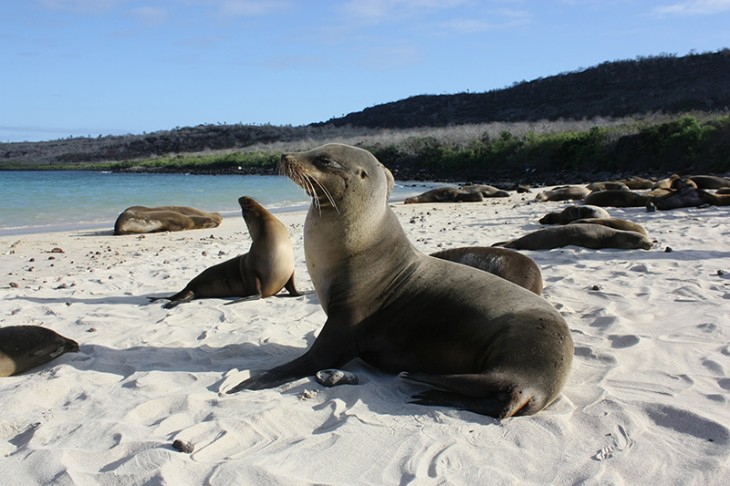 A hotel-based stay is an increasingly popular option for Galapagos trips, thanks to its affordability and comfort. The islands are explored on a series of day trips and here Jordan discovers the island of North Seymour.

Gathering at the main port, we waited a few minutes for other members of the group to show up, before heading by taxi to the Itabaca Channel, where the boat ride begins. The journey from Puerto Ayora to the channel is around 45 minutes, followed by a short panga ride to the Sea Finch - a small yacht used for day excursions. It has an indoor and outdoor social area, changing rooms, bathrooms and tea and coffee making facilities on board. I armed myself with tea and biscuits and made my way to the outdoor seating area to enjoy the view as we sailed to North Seymour.

An hour later we arrived at the island. Stepping from the boat to the land, we were instantly confronted by hundreds of sea birds, all narrowly missing our heads as they flew above. We began the excursion with a short nature hike. The terrain in most parts of the Galapagos is very rocky and uneven, due to the volcanic nature of the islands, so I would recommend sturdy trainers or walking boots for this walk.

The first thing we came across was a small nest with a few adult frigate birds, and some fluffy white chicks. Interestingly, the chicks hatch white and gradually lose this colouring over their lives. A second nesting site revealed 3 male frigate birds with what looked like bright red balloons on their chests. This behaviour is designed to attract a mate and, sure enough, a female frigate was flying overhead observing who could puff their chest the most. We were very lucky to see this as November is the end of the mating season for frigate birds. 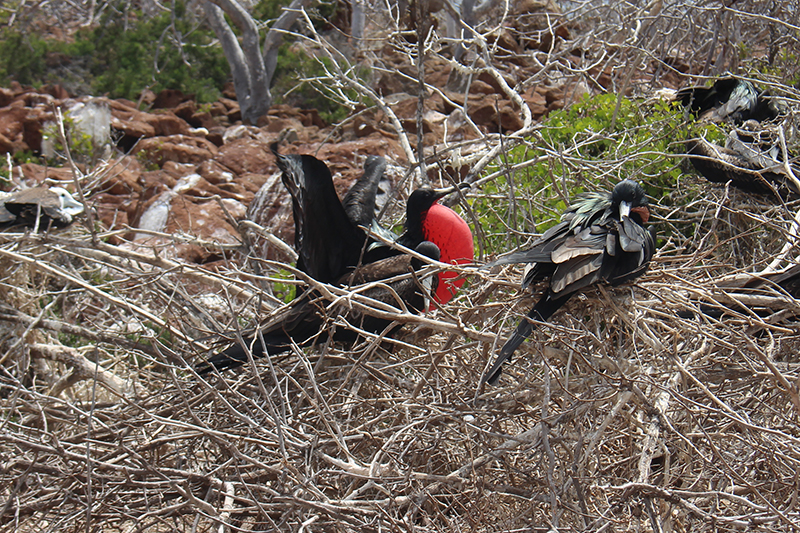 A little further on, we spotted a blue-footed booby preening herself on a rock, as if in anticipation of our photoshoot. Seeing this unique bird species is a Galapagos highlight for many, and North Seymour is one of the best islands to see them. Their bright blue feet stand in stark contrast to much of nature, but for good reason. Seeing a young blue-footed booby later, I was surprised to note its feet were a greyish black colour. Turns out their feet attract mates, so only become vibrantly blue as they reach sexual maturity.

While very photogenic standing still, it is also fascinating to watch blue-footed boobies fishing. Groups of up to 30 torpedo themselves into the water at speeds of 60mph. One great place to see this is on the nature trail behind Las Grietas, and close to the Finch Bay hotel as they dive off of the coast of Santa Cruz Island. 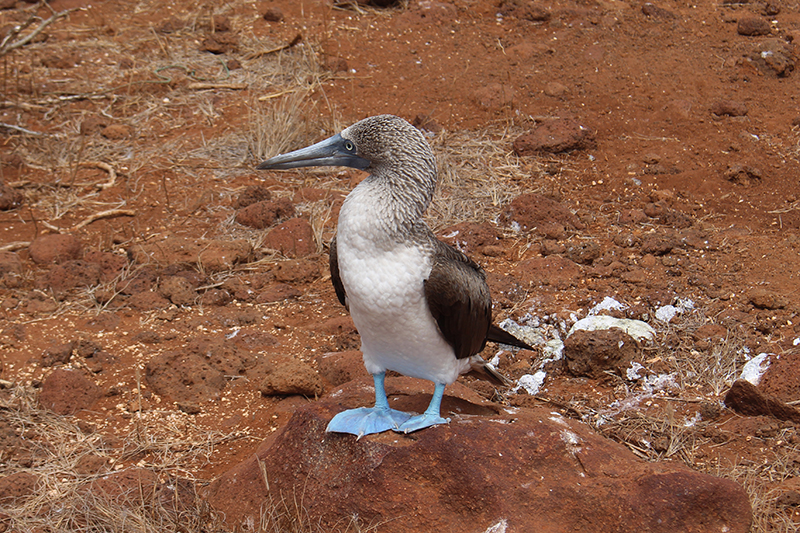 Next we came across a couple of large land iguanas. Originally a native of Baltra, they nearly went extinct after it became a military base in World War Two. Fortunately, the last few land iguanas were moved to North Seymour Island, where the population thrived in the similar climate, and gradually they have been reintroduced to Baltra Island too. 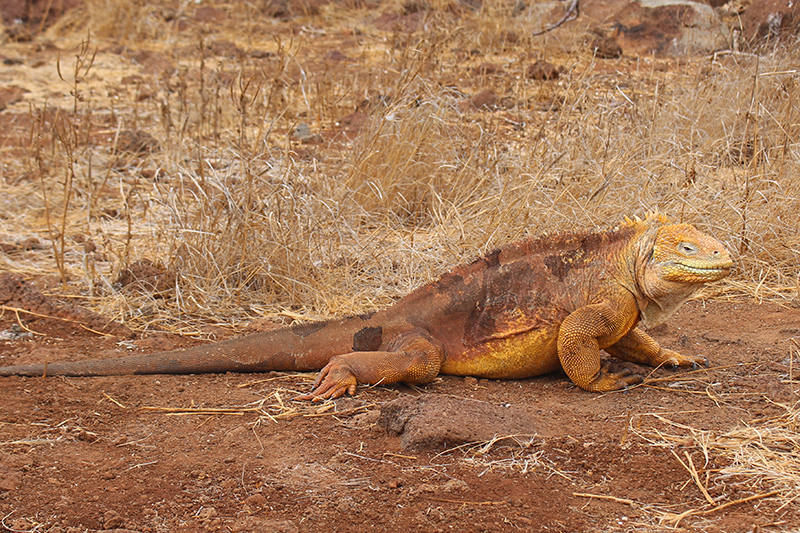 We also encountered a few young, and very friendly, sea lions. Unlike most of the world, animals here are curious and unafraid of humans – one of the things making the Galapagos so special to me. The sea lions waddled out of the sea right up to us, one even wanting to sniff the shoes of each member of our group! 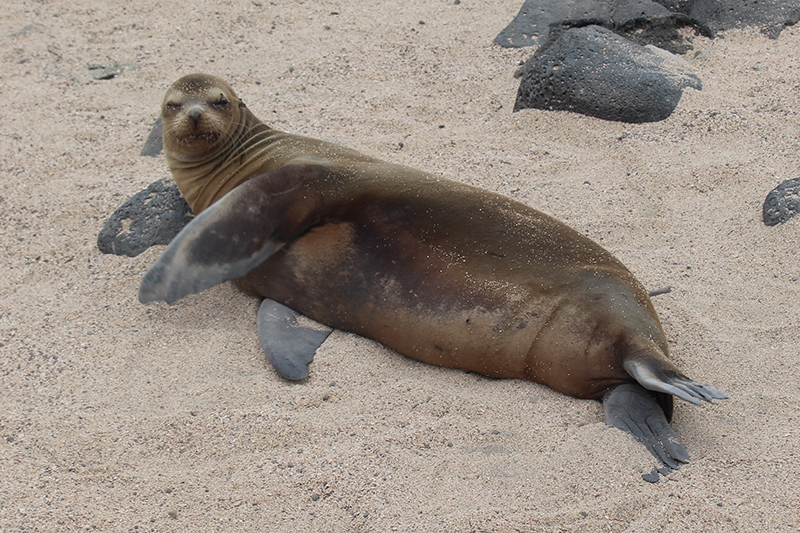 Leaving the land, we enjoyed a buffet lunch of fresh fish, vegetables, rice and salad aboard the Sea Finch, and I was excited to see my vegetarian option was a delicious lentil soup. After lunch we set sail for the snorkelling location, taking a panga out closer to the edge of the island. In November, the sea is fairly rough and very cold so I would recommend this for confident swimmers. Some people opted to stay aboard, simply enjoying the views from the social areas. For those of us snorkelling, we were lucky enough to see 5 small white-tip reef sharks, hundreds of colourful fish including angel fish, and even a few bright blue starfish. For me, the snorkelling is the best part of the Galapagos Islands. Its status as a marine reserve means you are guaranteed to see lots of marine species every time you get in the water!

Our final stop was Bachas Beach, one of the most beautiful beaches in the Galapagos. We had free time here, so some people chose to take a 10 minute walk to a small lagoon, some swam in the clear water and some just relaxed on the beach, with its picturesque white sand and teal blue water. A fitting end to a lovely Galapagos excursion.