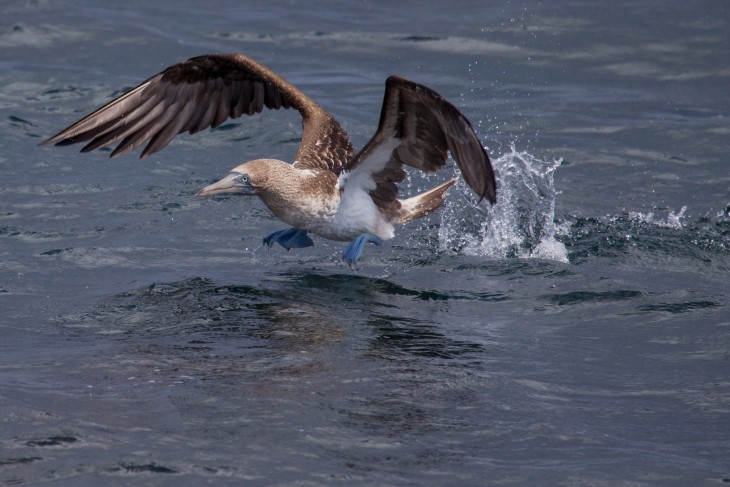 The main reason the Galapagos Islands have become such a popular tourist destination is because of the ability to observe so many species of animals at such close quarters. Galapagos wildlife is fearless and will come right up to you, so you can snorkel with sharks and turtles, play with sea lions, learn about fascinating finches and walk amongst giant tortoises and iguanas. Read our blog to find out which wildlife can be found on which island.

There are 26 species of native birds on the Galapagos Islands, 14 of which make up the group known as Darwin’s finches. These birds are considered to be the fastest-evolving vertebrates in the world. On Charles Darwin’s trip to the Galapagos Islands in the 1830s, he noticed that certain species (finches, for example) were similar from island to island, but each had managed to adapt to their environments in different ways. Darwin wondered about the changes in their beaks, and realised that they were all slightly different shapes to make them fitter to survive on available food. Read our blog about Charles Darwin and the Theory of Evolution to find out more. 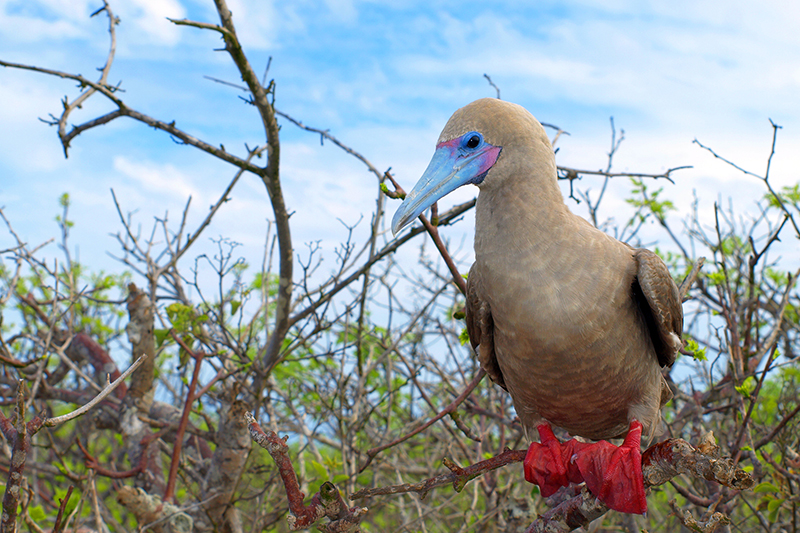 There are three species of boobies on the Galapagos Islands, although none are endemic. The blue-footed booby has bright blue feet and is well known for its comical courtship dance. The red-footed booby has red feet and blue bills. The masked booby is the largest of the boobies and has a black patch over its eyes. 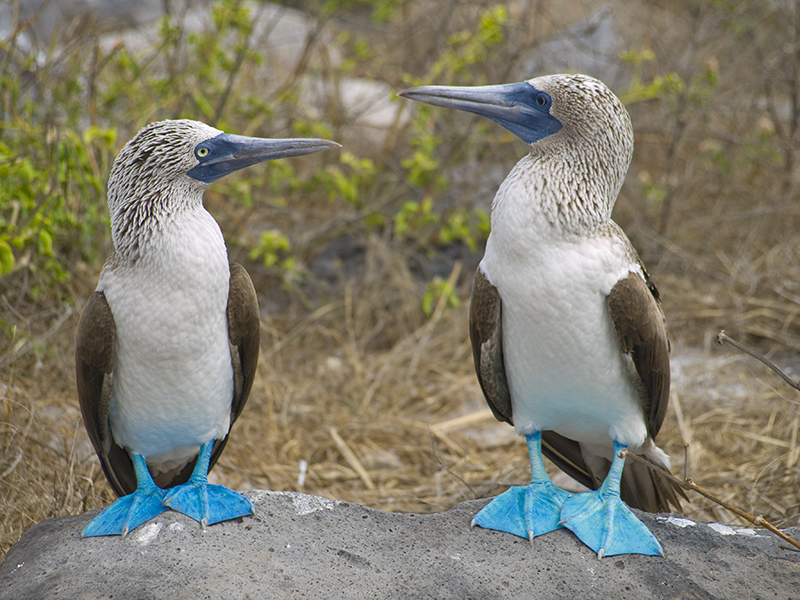 Blue-footed boobies can be found on most islands, except those in the north. Genovesa and San Cristóbal are the best places to see red-footed boobies, although these are less commonly spotted than their cousins. 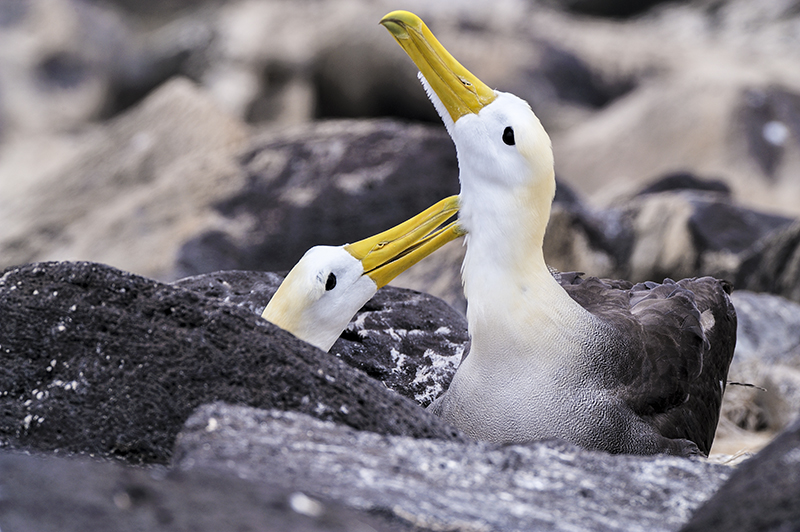 The waved albatross is the largest bird in the Galapagos, with a wingspan of up to 2.5 metres and weighing up to 5kg. It breeds from April to December on the islands, and spends the rest of the year gliding over the Pacific Ocean.

Endemic to the island of Española. 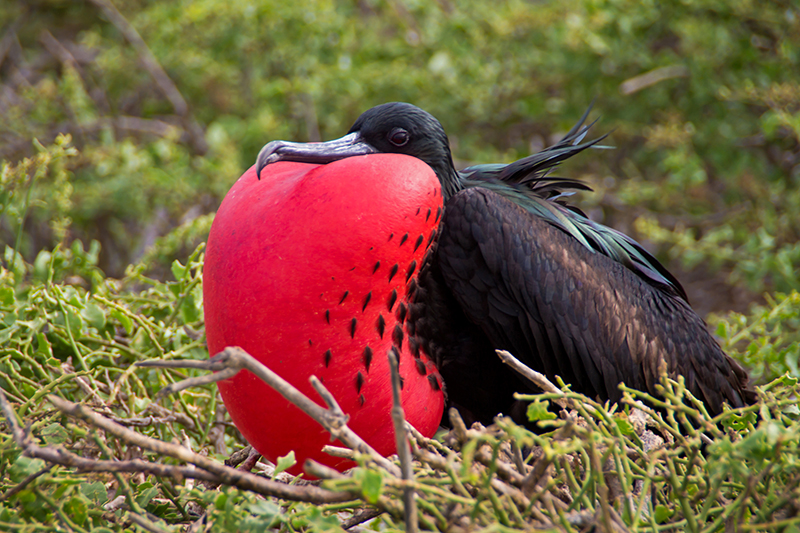 The frigate bird is represented by two species on the islands: the magnificent frigate bird and the great frigate bird. They have a wingspan almost as wide as the albatross, although they are much lighter. The male frigate bird has a red flap of skin under its neck which it inflates to attract females.

The largest and most active colony of magnificent frigate birds can be found on North Seymour Island, as well as Floreana, San Cristóbal and Genovesa 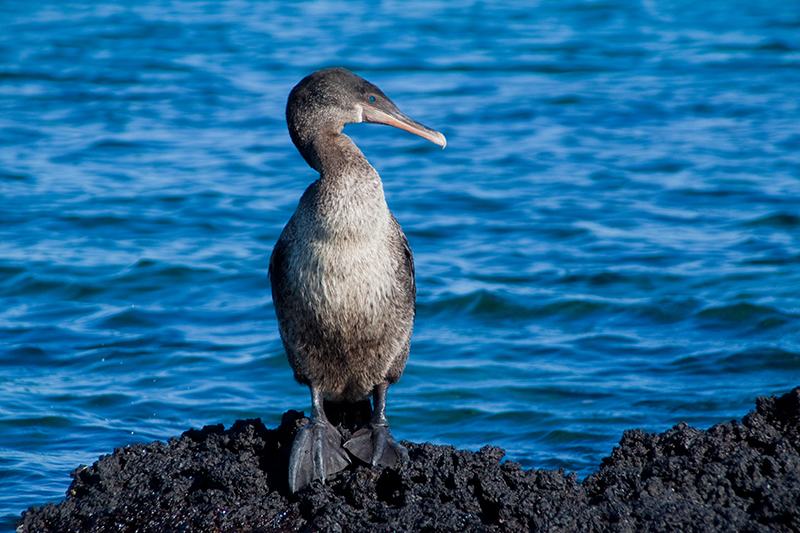 The flightless cormorant is the only flightless seabird in the world apart from the penguin, and it is endemic to the Galapagos Islands. There are estimated to be only 800 pairs.

Fernandina and the northern and western coasts of Isabela. 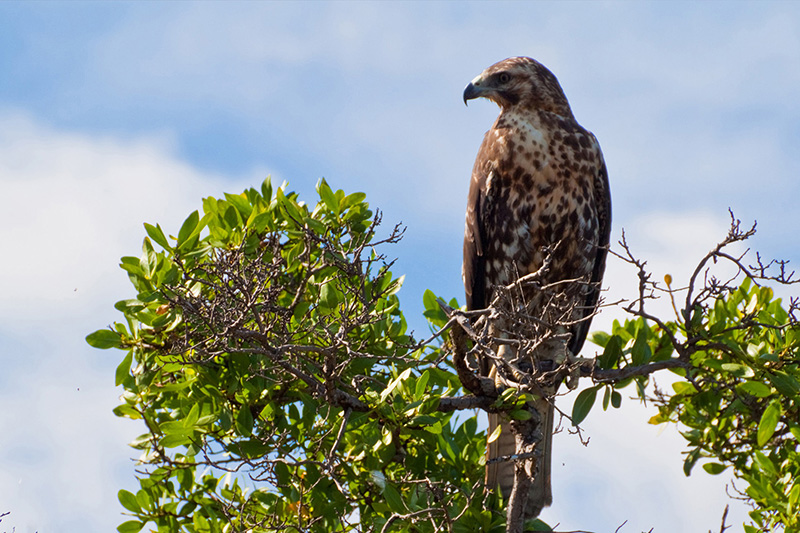 The Galapagos hawk is at the top of the terrestrial food chain. With an average wingspan of 120cm, they are easily spotted and one of the world's rarest birds of prey, with a population of just 150 breeding pairs. 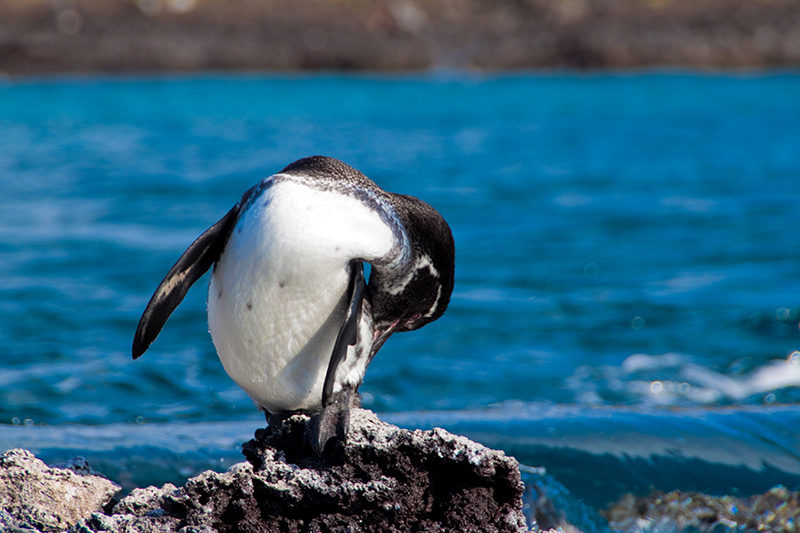 One of the smallest penguins in the world and the only penguin that lives north of the equator, the Galapagos penguin is the most endangered of its kind in the world, largely due to marine iguanas overtaking their nesting places. Snorkelling with penguins is often one of the highlights of a visit to the Galapagos National Park. 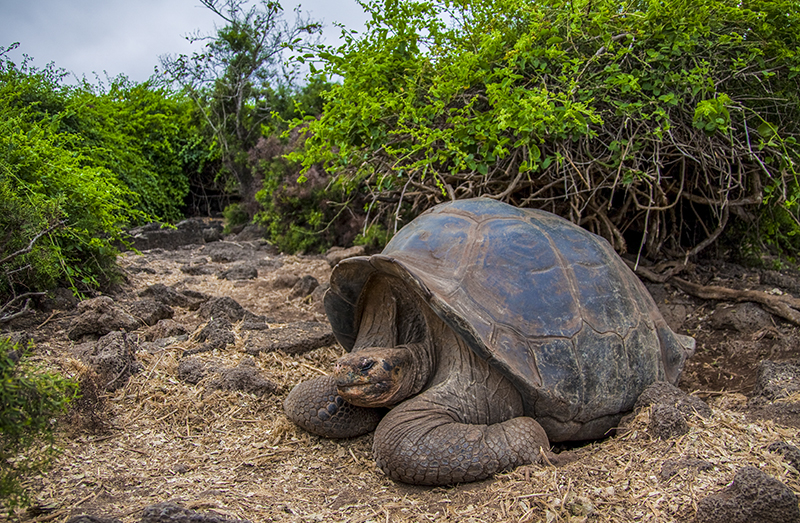 Possibly the most well-known animal in the Galapagos National Park is the Galapagos tortoise. The word ‘Galapagos’ actually derives from an old Spanish word for tortoise. There are currently at least 10 surviving subspecies, with 4 species extinct. Lonesome George was the last surviving member of the Pinta tortoise subspecies, but he died in 2012 without producing any descendants. The giant tortoise can weigh up to a quarter of a ton and live to over 170 years old. In February 2019, a giant tortoise was spotted on the island of Fernandina, after not being seen for more than 110 years and feared to be extinct. 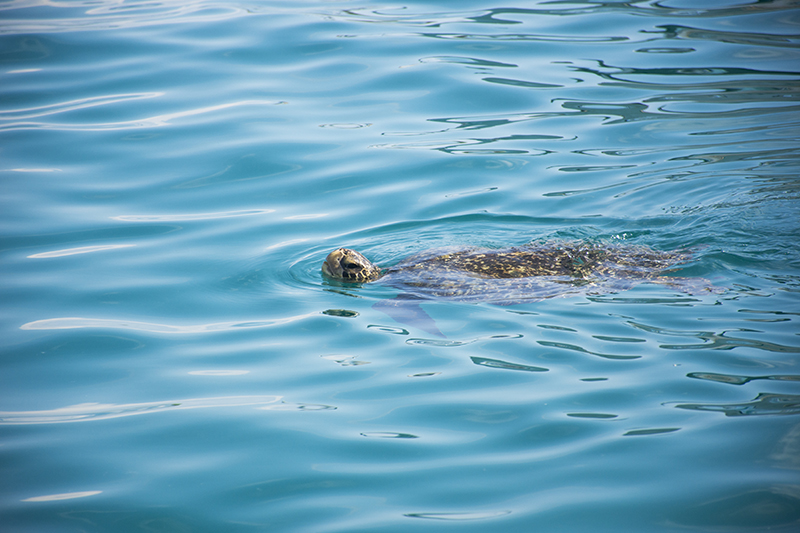 The Galapagos green turtle is the only turtle species to breed and nest on the Galapagos Islands, and can often be seen when snorkelling or from boats. Weighing up to 150 kilograms, they can swim up to 35 mph over long distances and can be seen throughout the archipelago. 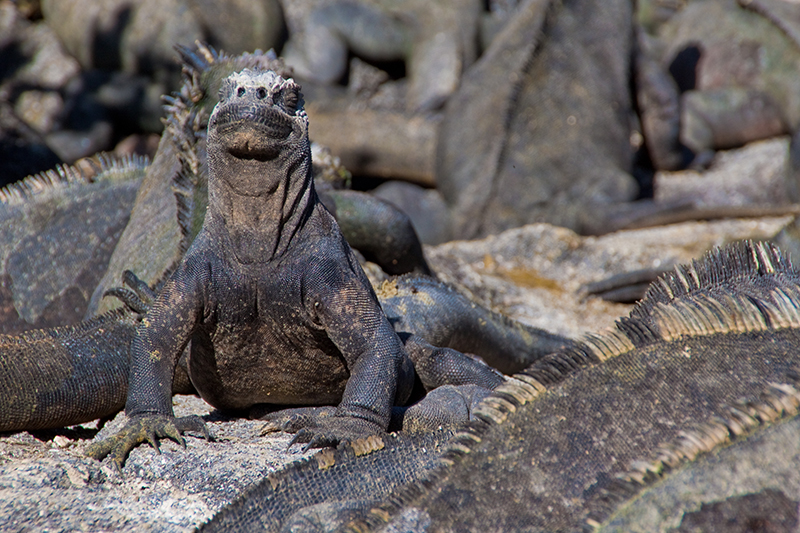 Galapagos land iguanas are found on many of the islands, and can be over a metre in length. They spend their time either sprawled in the sun or seeking shade in the cacti, rocks and trees. They live in the drier parts of the Galapagos Islands and sleep in burrows to conserve their body heat. 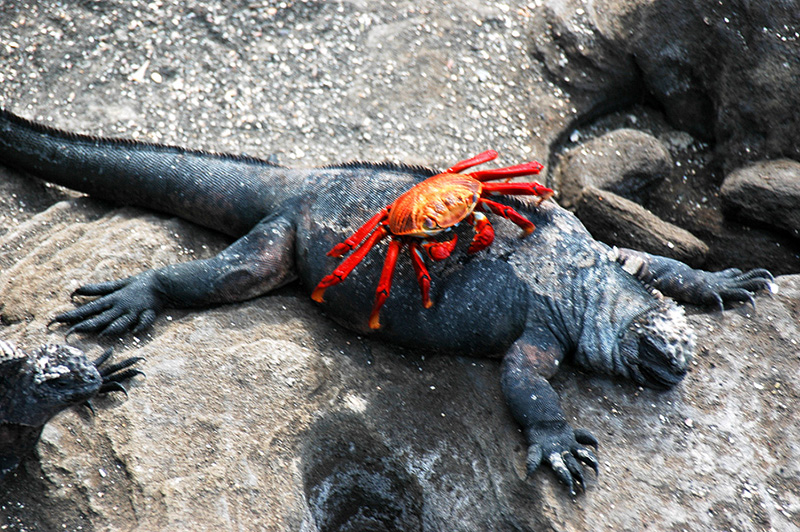 The marine iguanas on the Galapagos Islands are the only seagoing lizards in the world and can dive to depths of up to 20m and can stay underwater for up to an hour at a time.  When they enter the water, their heartbeat slows to half its pace in order to conserve energy and feed for as long as possible.

Marine iguanas can be seen in coastal regions on the islands of Isabela, Fernandina, Española, Floreana, Santa Cruz and other nearby islets. 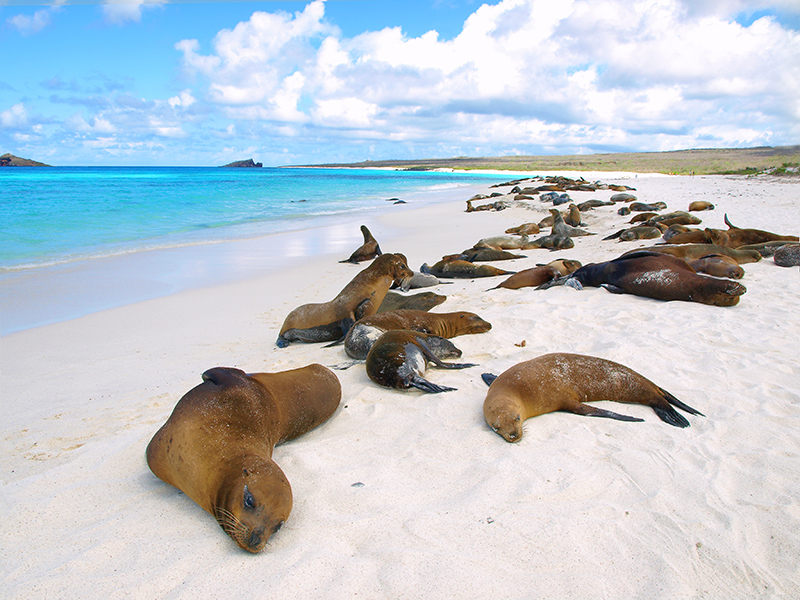 The Galapagos sea lion is one of most frequently seen animals on the islands. The bulls weigh 250kg and can be aggressive. Females and young, however, are very playful, and will often swim around you when you are snorkelling. Fur seals are less common, but can be seen on Santiago Island. There are also two species of bats and two of rats on the islands.

Galapagos sea lions can be found on most of the islands. Fur seals can be seen on Santiago. 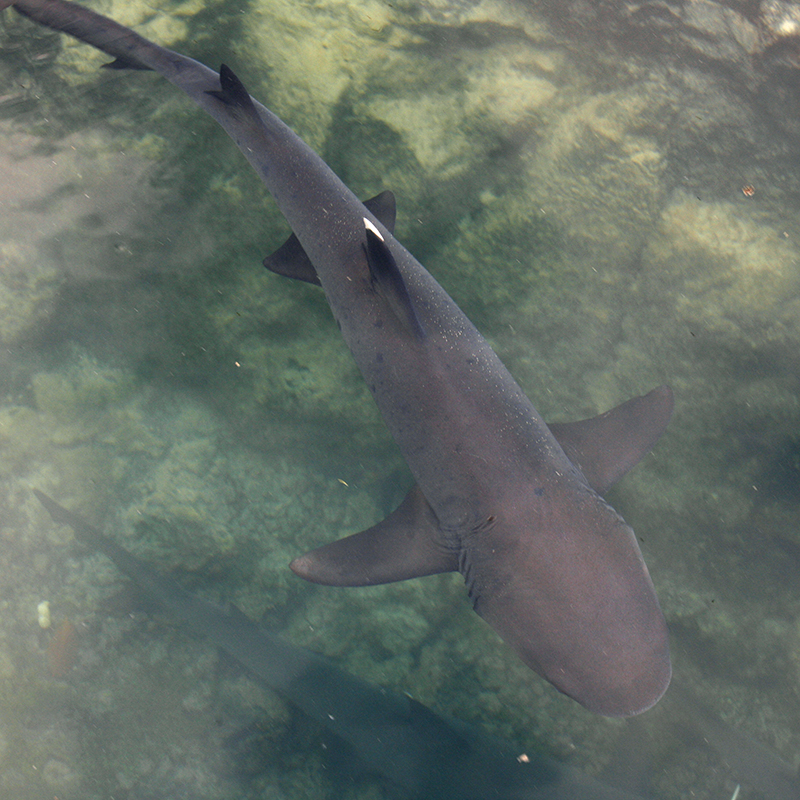 Several species of whales and dolphins are seen around the islands, with bottle-nosed dolphins often seen surfing the waves at the bow of boats. There are also 400 species of fish in the Galapagos Islands, of which 50 are endemic. Sharks are often seen when snorkelling, with the most common species being the white-tipped reef shark and the Galapagos shark. Hammerheads are sometimes seen when diving. Rays are also common and often seen, including the giant manta ray, which can be 6 metres from tip to tip.

The scalloped hammerhead shark, whale shark and Galapagos sharks can be seen around the northern islands of Darwin and Wolf and occasionally around Kicker Rock. Whitetip reef sharks can be seen throughout the whole archipelago, but most frequently around North Seymour, Champion and Gardner islets, and northern Isabela. 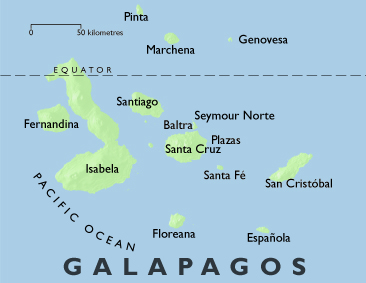 From owls and flamingos to crabs and lizards, there are plenty more species found on the Enchanted Isles. You can visit the islands on daytrips if you choose to stay in a hotel, or opt for a cruise to reach the more far-flung locations such as the western coast of Isabela.

View all our Galapagos options here.