Top Ten Things To Do In Rio de Janeiro 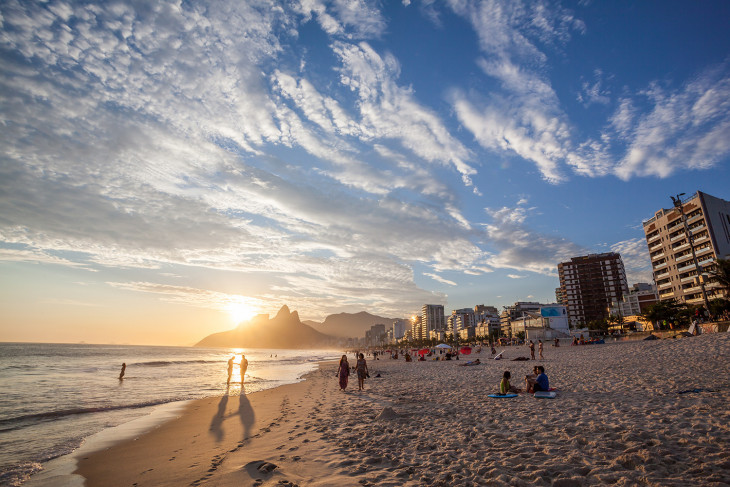 Rio de Janeiro is one of the world’s most iconic cities, and arguably the most vibrant city in South America. From the world-famous Copacabana and Ipanema beaches and the colourful carnival processions to the striking Christ the Redeemer statue, the Brazilian city has it all. Rio’s natural beauty is something to behold – the tropical rainforest of Tijuca, the golden sand and turquoise water of the famous beaches and the panoramic viewpoint atop Sugarloaf Mountain. Rio also boasts many manmade landmarks, most famously Rio’s Christ the Redeemer statue with its outstretched arms waiting to embrace all visitors.

Here are the top ten things to do during your holiday in Rio de Janeiro. 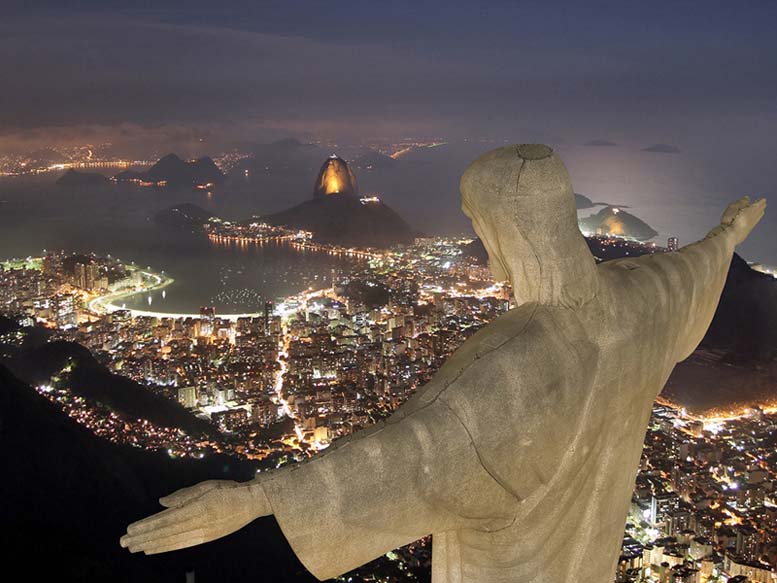 The Christ the Redeemer statue is an impressive 98ft high and looms over Rio de Janeiro at a staggering 2,310ft above sea level. The statue is located at the peak of the 2,300ft Corcovado Mountain in the Tijuca Forest National Park, overlooking the city of Rio and Guanabara Bay.

Not only the most recognisable landmark of Rio and one of the most iconic statues in the world, Christ the Redeemer has become a cultural and religious icon attracting nearly two million visitors every year.

In 2007, the statue became one of the New Seven Wonders of the World, alongside some of Latin America’s top sights such as Machu Picchu in Peru and Chichén Itzá in Mexico.

You visit Christ the Redeemer on our Iconic Rio excursion, available on all our Brazil holidays. 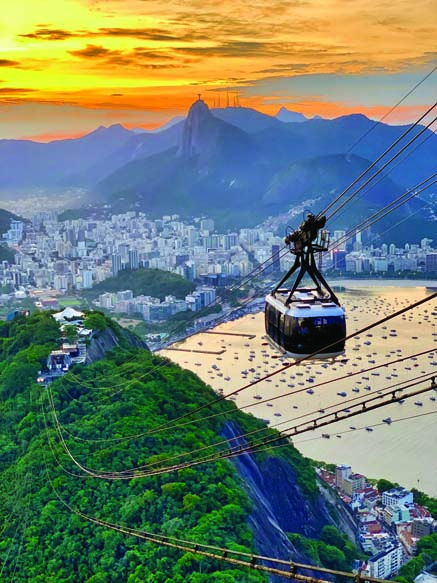 The Sugarloaf Mountain is a majestic peak situated at the mouth of Guanabara Bay in Rio. Rising 1,299ft above the harbour, its name is due to its resemblance to the shape of a refined sugarloaf. The Sugarloaf is known for its cable cars and 360-degree panoramic views. You can see almost everything from the top of the mountain – Rio’s famous beaches, historical centre, skyscrapers, Tijuca National Park and Christ the Redeemer statue standing proudly in the distance.

Aside from the panoramic views, the Sugarloaf Mountain is located in a quiet neighbourhood called Urca. At the bottom of the mountain is Praia Vermelha, a charming little beach where you can soak up the sun or try paddle boarding or canoeing.

The Iconic Rio excursion on our Brazil holidays includes a trip in the cable car to Sugarloaf Mountain. 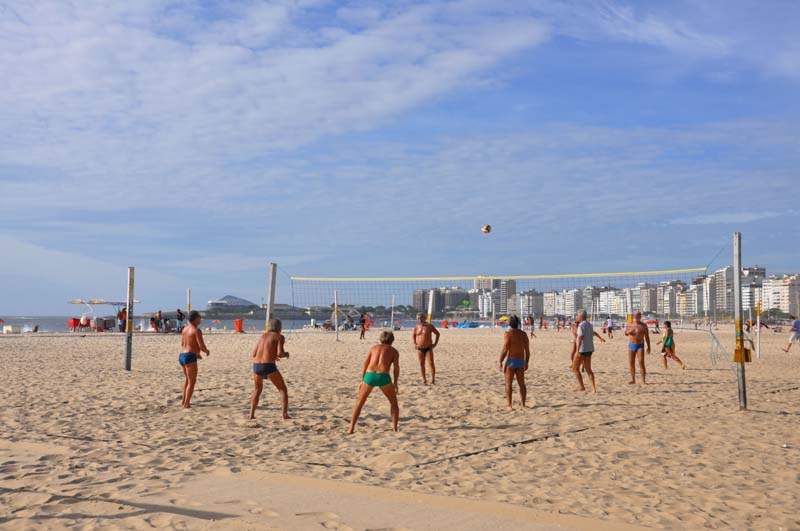 A 4km stretch of yellow-gold sand, Copacabana Beach is a hotspot for both tourists and cariocas (residents of Rio). Copacabana Beach is located in the neighbourhood of the same name and stretches along Avenida Atlântica to the Fort Copacabana. One of the most unmistakable features of Copacabana beach is the black and white wavy Portuguese pavement design that weaves up the entire promenade.

Copacabana Beach is a hive of activity and has something for everybody. You’ll find sunbathers basking in the sunshine until evening, beach vendors selling food, drinks and souvenirs as well as sport lovers playing football, volleyball or surfing.

At the end of the beach is the Copacabana Fortress, an important army site but also a tourist attraction with a military museum with an up-market café.

On Sundays and bank holidays, one side of Avenida Atlântica is closed to cars, giving cariocas and tourists more space for beach activities. 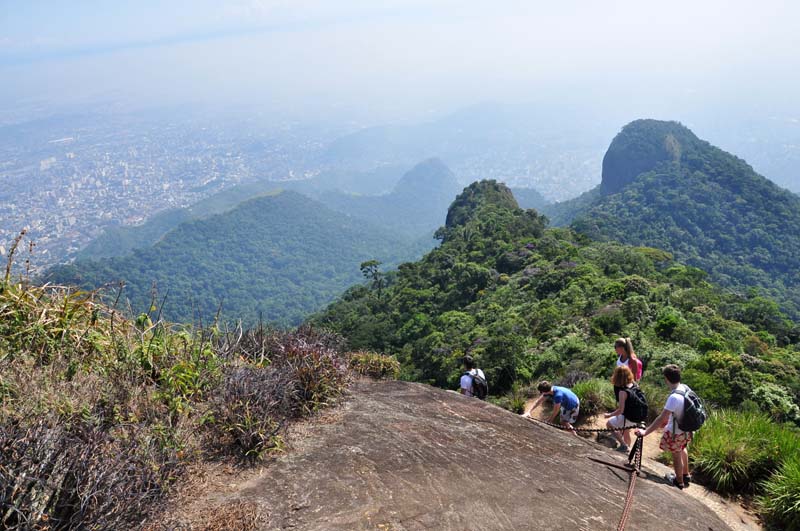 Covering 8,300 acres, Tijuca National Park is the world’s largest urban rainforest with bright green trees, several waterfalls and high peaks. It has a well-marked hiking trails and good free trail maps are given out at the park entrance.

Tijuca is home to over 1,600 plant species and more than 350 different species of mammals, birds, amphibians and reptiles, many unique to the forest and some that are facing extinction.

Tijuca also has 30 waterfalls, with the most famous being the Cachoeiro do Horto and the Cascatinha waterfalls.

As well as natural attractions, the forest is home to some great viewpoints. One of those is Vista Chinesa, a Chinese pavilion with spectacular views of the the Sugarloaf Mountain, Christ the Redeemer and the city. 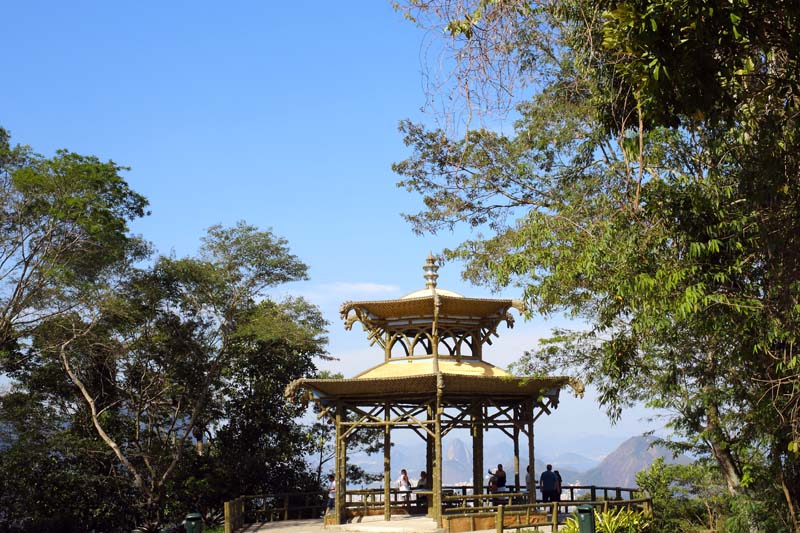 For adventure seekers and outdoors lovers, there are the impressive peaks of Pedra da Gávea and Pedra Bonita.  The hike to Pedra da Gávea is one of the most challenging that Rio has to offer taking, around six hours. The views rival those from the Sugarloaf Mountain and Christ the Redeemer as the granite peak rises 2,769 feet above sea level!

The hike to Pedra Bonita is more popular and less challenging, with the round-trip time being one and a half hours. At Pedra Bonita, the more extreme thrill seekers can even try paragliding and hang-gliding, as this is where the city’s launch ramp is. 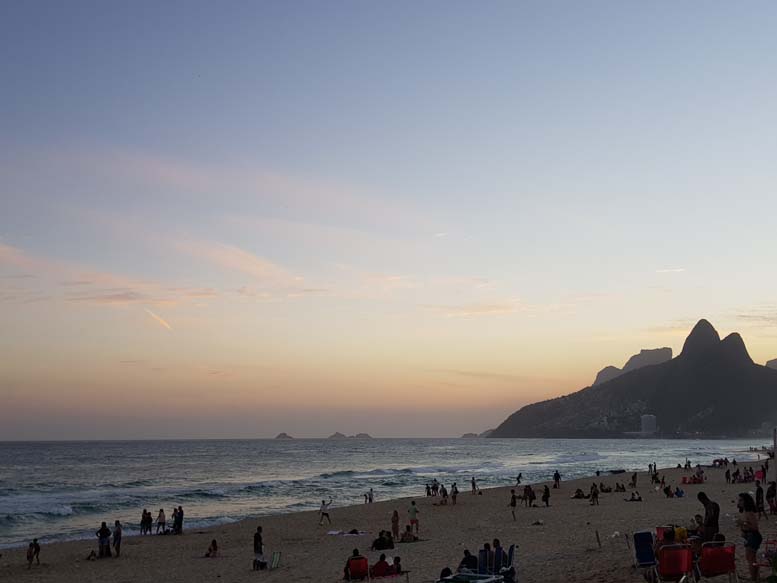 Ipanema is famous for its beautiful beach, stretching across two kilometres.  The beach is bordered by Arpoador Beach on one end and Leblon Beach on the other.

At Ipanema Beach you will always see people playing foot volley (a clever combination of football and volleyball!), paddleball, kitesurfing as well as many surfers and sun worshippers.

Arpoador is arguably the best spot to see the sunset in Rio as the sun sets behind the Morro Dois Irmãos (Two Brothers peaks) at the western end of Ipanema Beach. The summer sunsets are often met by applause by local beachgoers and tourists alike.

The neighbourhood of Ipanema is one of the most expensive places to live in Rio and filled with high-end boutiques and restaurants. A local hippy fair is held every Sunday in Praça General Osório and is the perfect spot to browse a wide range of Brazilian souvenirs, with over 700 stalls.

Ipanema Beach is mostly known internationally as the birthplace of the popular bossa nova jazz song ‘The Girl from Ipanema (‘Garota de Ipanema’), written by Antônio Carlos Jobim and Vinícius de Moraes in 1962. You can even eat at the Garota de Ipanema Restaurant and Bar where the song was written.

Rio’s botanical garden is over 350 acres and lies at the bottom of the Corcovado Mountain, just below the right arm of Christ the Redeemer. It contains around 7,000 different species of tropical and subtropical plants and trees, including 900 different varieties of palm trees. The botanical garden is a great example of the diversity of Brazilian exotic flora and fauna.

The park itself not only consists of the botanical garden, but also a research institute, botanical library, museums, historical monuments and many collections. One of the best features in the garden is the perfectly structured Avenue of Royal Palms, a 2,460ft line of 134 tall palm trees leading from the entrance into the park. 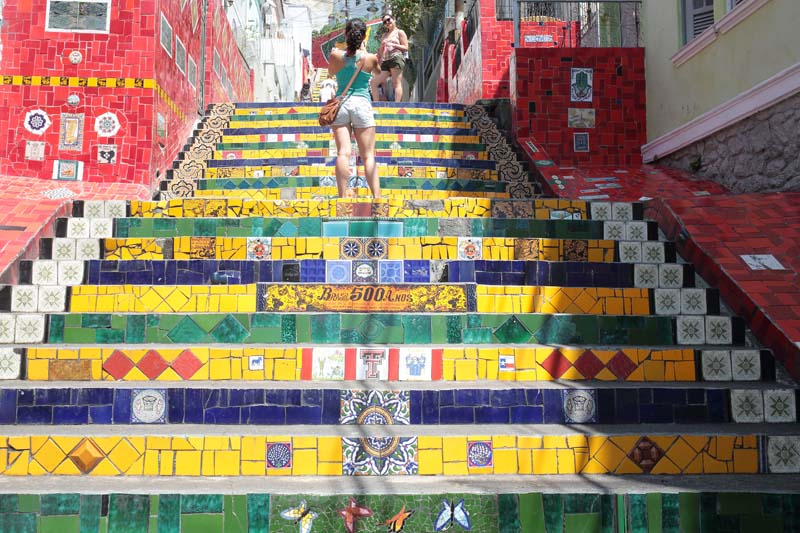 Escadaria Selarón is a set of colourful mosaic steps in the neighbourhood Lapa. Chilean artist Jorge Selarón transformed the 215 steps of the Convent of Santa Teresa as a ‘tribute to the Brazilian people’. The 215 steps are covered in over 2,000 tiles collected from over 60 countries around the world, great for photography opportunities.

8. Museum of Tomorrow - Museu do Amanhã

One of Rio’s more futuristic attractions, the Museum of Tomorrow is a science museum located on Píer Mauá. The museum’s exhibits focus on the relationships between humanity, sustainability and ecology, and is an icon of the modernisation of Rio’s port. The museum and its surrounding gardens, pools and leisure area form a central part of the city’s port (Porto Maravilha), which underwent revitalisation in time for the city’s 2016 Summer Olympics. It was designed by Spanish neofuturistic architect Santiago Calatrava who was inspired by Rio’s Botanical Gardens. Since its opening in 2015, the museum has already received over 3 million visitors. 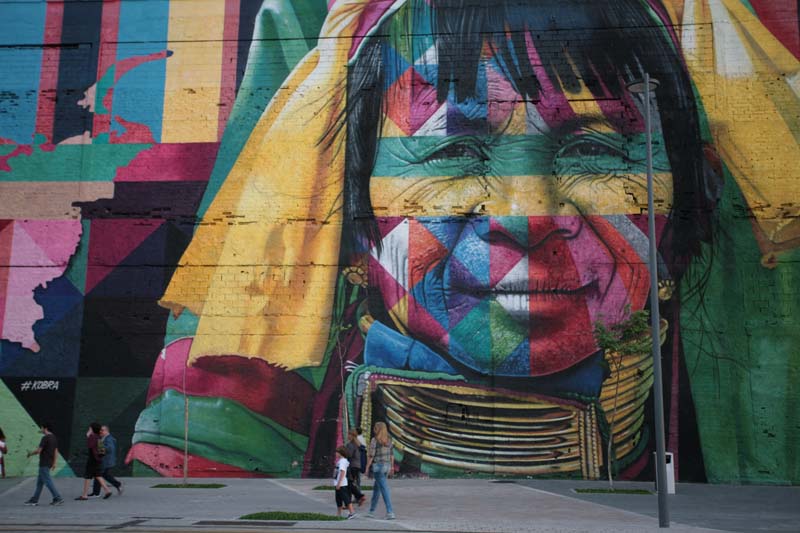 Nearby, be sure to check out the world’s largest street art mural, spread across a 190-metre-long wall. Painted by Brazilian street artist Eduardo Kobra, the art depicts ancestors and indigenous people from the five continents, including an Ethiopian Mursi woman, a Brazilian Tajapo boy, a Kayin Thai woman, a Northern European Supi man and a Huli man from Papua New Guinea.

In-between the sightseeing and beach hopping, you have to try Rio’s amazing food and drinks. Here are some honourable mentions: 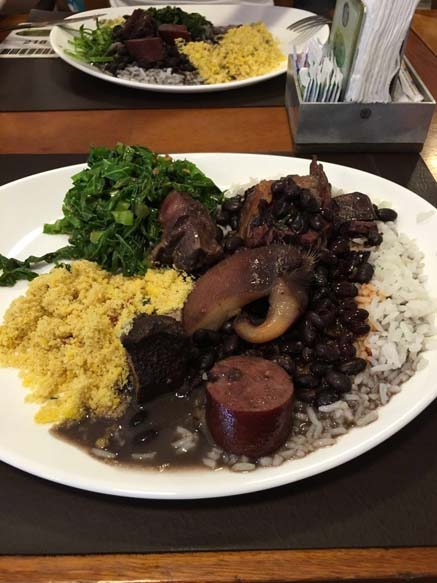 Feijoada has been described as Brazil’s national dish. It is a rich bean and meat stew consisting of black beans and a variety of pork cuts, served with farofa (toasted cassava flour), arroz (rice) and fried kale. The ultimate comfort food is just as warm and comforting as the people of Brazil themselves. 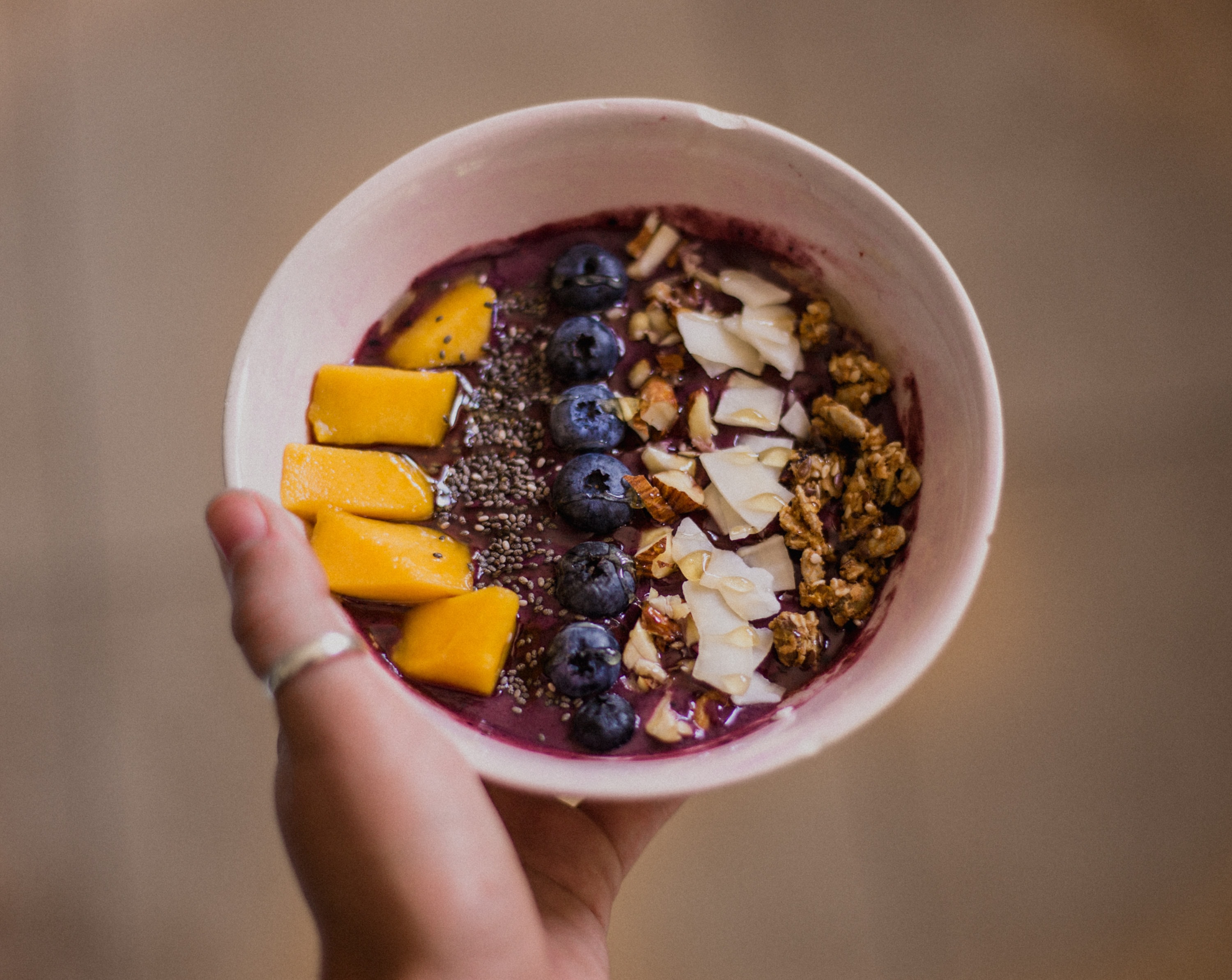 The açai berry is native to Brazil’s Amazon and is a superfood due to its incredible health benefits. Açaí na tigela is a dish made with the frozen and mashed fruit of the acai palm. It is served as a smoothie/sorbet and is commonly topped with granola, fruits and guaraná syrup. You can find açaí na tigela sold on the beach itself or in snack bars lining the beach promenades, as well as in juice bars, cafes and bakeries. You can even buy açaí vodka, and açaí beer! It is delicious, healthy and the best way to cool down after a hot day in Rio.

Temperatures reach over 30 degrees Celsius during the summer in Rio and sometimes a quick bite from a street food stand is much more appealing than a heavy meal!

You’ll find many street food vendors lining the sidewalks from Copacabana, through Ipanema to Leblon, serving a variety of sweet and savoury treats.

You can also try tapiocas, warm crepe pancakes made from cassava flour, typically filled with ham, cheese, meat or chocolate, coconut, condensed milk with slices of banana or strawberry. Wash it down with some água de coco - coconut water best sipped straight from the coconuts which are sold everywhere on Rio’s beaches. 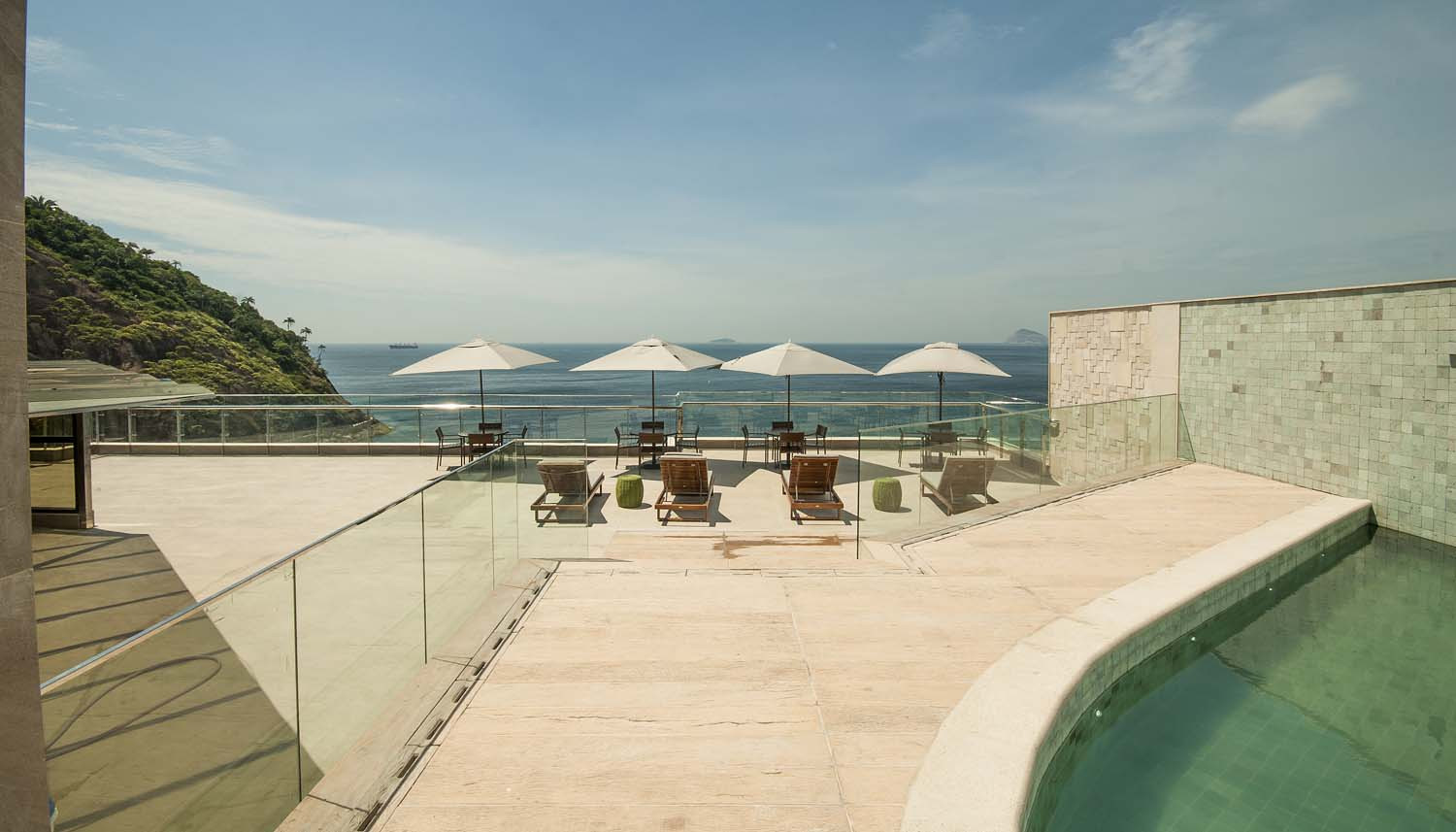 If you don’t fancy the beach or simply want some well-earned R&R, both the hotels we offer in Rio have rooftop pools.

Our standard hotel, the Arena Leme, has a rooftop pool and sauna.

Our superior hotel, the Windsor California, has a rooftop pool overlooking the ocean, a spa lounge, steam room, hammam and sauna. Check out all our Brazil accommodation options here.

All our Brazil trips include at least three full days in Rio de Janeiro, with time to explore the city of your own accord as well as our optional excursion which takes you through some of Rio’s most iconic and historic sites.

Order a free brochure to find out more about our Brazil itineraries.