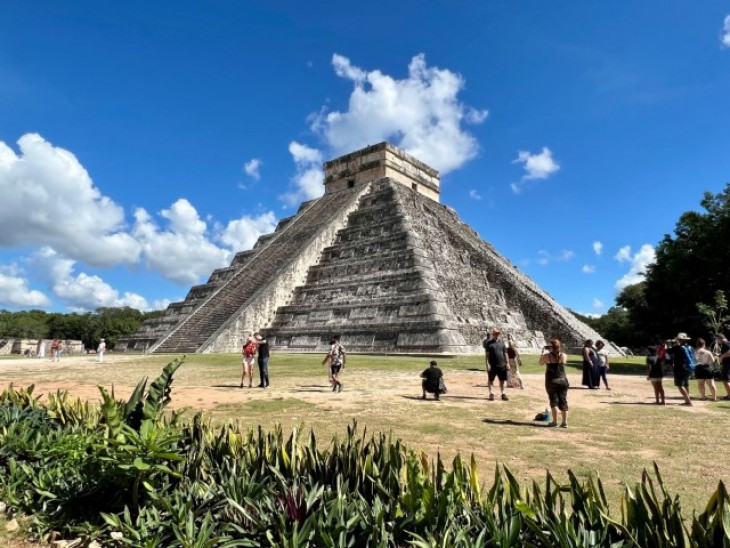 In November 2022, I visited Mexico for the first time. I arrived just after the Day of the Dead, and just before the start of the 2022 World Cup, making it a very exciting time to visit Mexico.

I arrived in Mexico City on a direct British Airways flight, one of two airlines that operate direct flights between the UK and Mexico City. My hotel was located in the historic centre, a great location for first-time visitors to Mexico City close to many of the city’s best attractions, museums and restaurants. After a good night’s sleep, I spent my first full day in the city exploring the historic centre. The main square is called the Zócalo and is home to the Metropolitan Catherdal, National Palace and Templo Mayor. My first taste of Mexican history was at the Templo Mayor Museum. Prior to the Spanish conquest, the Zócalo was the main ceremonial centre in the Aztec city of Tenochtitlan, which was the capital of the Aztec Empire in the 15th century. 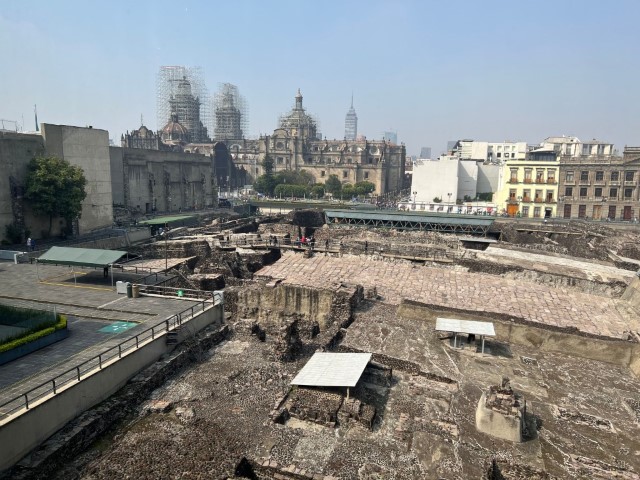 Overlooking Templo Mayor with the Cathedral in the background.

At its peak, Tenochtitlan was the largest city in pre-Columbian Mesoamerica. The main temple complex, the Templo Mayor, was destroyed by the Spanish in 1521 and the Mexico City cathedral was built in its place. The Museum of Templo Mayor was fascinating, and the exhibitions give a great understanding of the scale of this huge Aztec city.

I strolled down the bustling pedestrian Madero Street, lined with shops and restaurants with the Torre Latinoamericana towering over in the distance.  At the end of the street is the Palacio de Bellas Artes, home to a large theatre and museum. The building’s white marble façade and striking roof tiles make this building one of the city’s most iconic and photogenic! 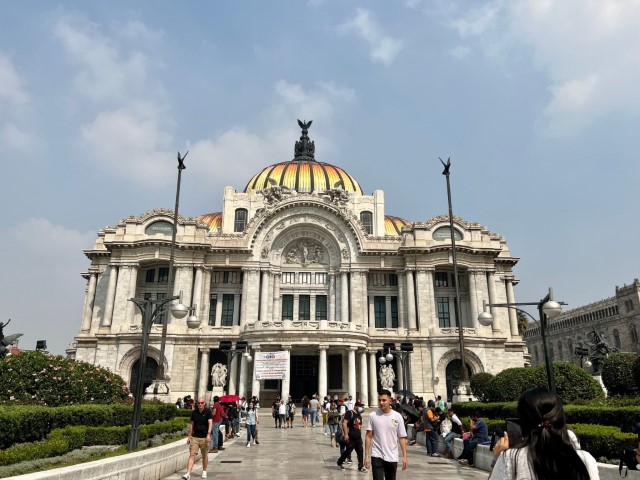 The Pyramids of Teotihuacán

The next day I left the city behind for a day trip to the Pyramids of Teotihuacán. About an hour away from Mexico City, this excursion is a great first insight into the importance of temples, rituals as well as the civilisations that preceded the Spanish conquest.

Teotihuacan was founded as early as 400 BC, and the city reached its peak in 450 AD. It was a bustling metropolis home to over 200,000 people, making it one of the largest ancient cities in Mesoamerica. The city began as a religious centre and the people who lived there built the city in line with their religious life and worship. Excavations have revealed that ethnic groups from all over Mesoamerica resided in the city, living in purpose-built multi-floor apartment compounds.

The Pyramid of the Sun stands 63 metres tall and 215 metres square, making it the largest building in the city and the largest pyramid in Mesoamerica. It is believed that the pyramid venerated a deity within Teotihuacan society, but this is still unknown. 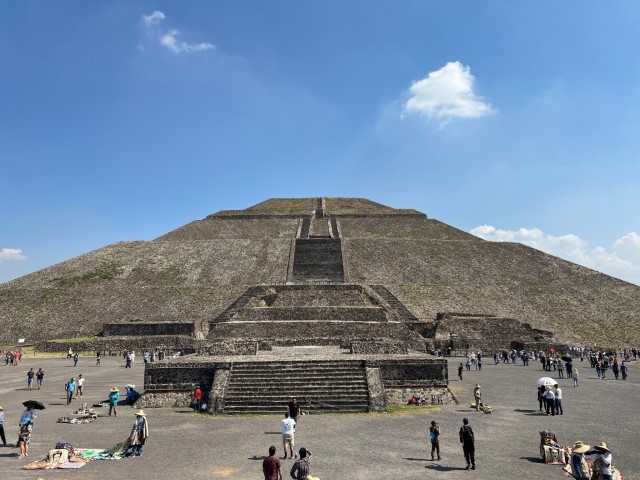 Pyramid of the Sun.

A platform atop the Pyramid of the Moon is believed to have been used to conduct ceremonies to worship the Great Goddess of Teotihuacan, the goddess of water, fertility and the earth. The main function of this pyramid was for ritual sacrifice and sacrificial remains were discovered in its foundations. 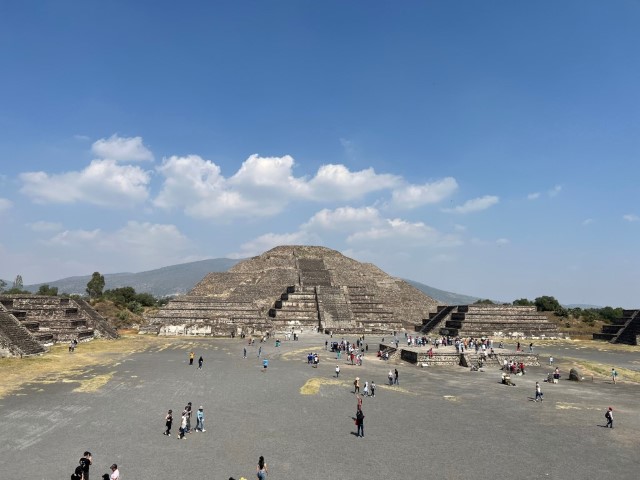 Pyramid of the Moon.

Teotihuacan is somewhat of a mystery to historians. Despite years of archaeological research, it is not known who built the city, nor the language they spoke or how their society was governed. What is clear to see is the ancient city’s cultural and political significance. For me what makes Teotihuacan fascinating is how little we know about how the city came to life yet and the civilisations who lived there.

A short fight from Mexico City away is the beautiful city of Oaxaca, Mexico’s culinary and cultural heartland. The historic centre of Oaxaca is filled with colourful buildings, intricate colonial churches and bustling plazas. 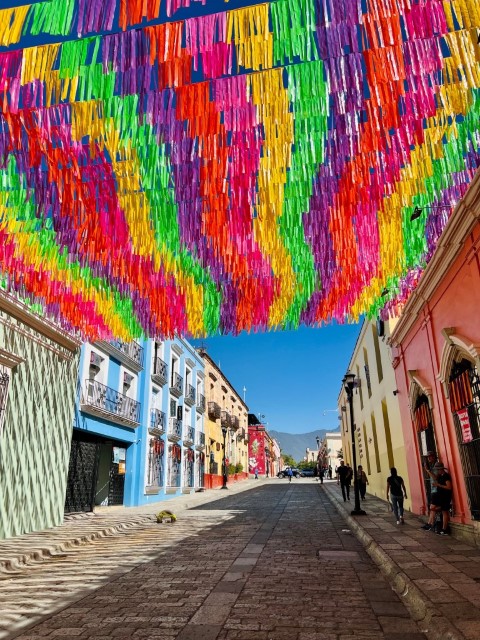 One of Oaxaca's colourful streets.

The best way to get to know a city is to visit its markets, and this is definitely true in Oaxaca. I wandered around 20 de Noviembre Market and marvelled at the amazing ingredients on offer. There are many stalls selling Oaxacan specialities such as coffee, chocolate, tortillas and even insects!

A popular local drink in the area of Oaxaca is Mezcal, known as the smoky cousin of tequila. This is a spirit similar to tequila, but with slight variations in the type of Agave plant used to produce the drink, making for a smoky flavour. There are numerous mezcalerias (bars specialising in mezcal) in the city. Either drink it straight, or try a mezcal margarita for a smoky take on the original!

No trip to Mexico is complete without trying the food. Oaxaca is known as Mexico’s culinary capital, and Mexican cuisine was the first to receive UNESCO culinary heritage status in 2010. Deriving from the Nahuatl word mōlli meaning ‘sauce’, mole refers to a family of sauces used in Mexican cuisine. There are hundreds of mole recipes throughout Mexico and in Oaxaca alone, there are over 200 known ways to prepare mole. The signature and most popular Oaxacan mole is mole negro, made from dried chillies, warming spices and a hint of chocolate. 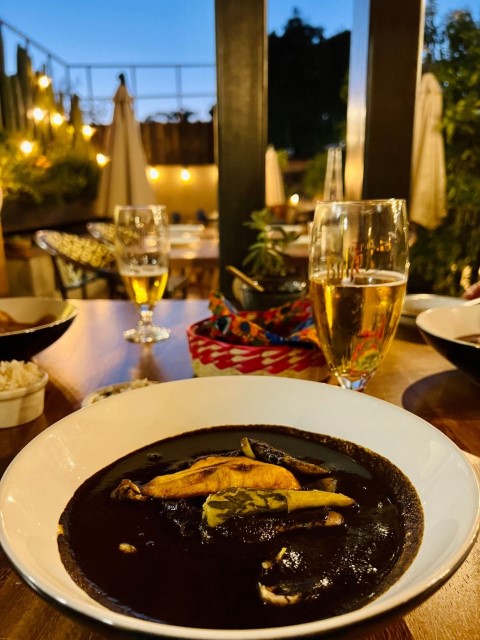 After a great few days in Oaxaca, I journeyed to the state of Chiapas, the southernmost state of Mexico. After arriving at Tuxtla Gutierrez airport, a short drive away was the Sumidero Canyon and time for a thrilling boat ride. Sumidero is a deep natural canyon with cliff walls that reach as high as 1,000 metres, covered in verdant rainforest. The boat ride lasted two hours and I was lucky to see different bird species and a small waterfall. The spray from the river helped cool down in the Mexican heat! 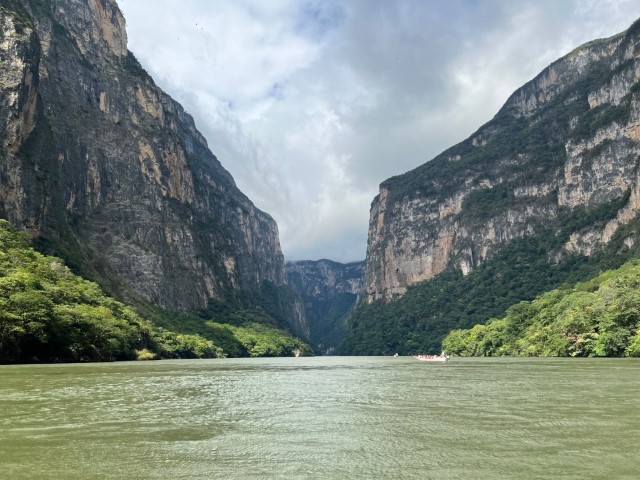 The boat ride allowed for great views of the canyon walls.

I continued on to the charming colonial city of San Cristobal de las Casas. The city is set in a mountainous highland valley surrounded by verdant pine forest making for a gorgeous backdrop. I spent an afternoon and the following day exploring the colourful cobblestone streets, churches and markets.

The main square, like in many Spanish colonial cities, is the religious centre and home to the Cathedral and City Hall. Built in 1528, the strikingly colourful façade of the cathedral is beautiful and in contrast to the other cathedrals I had seen in Mexico so far. 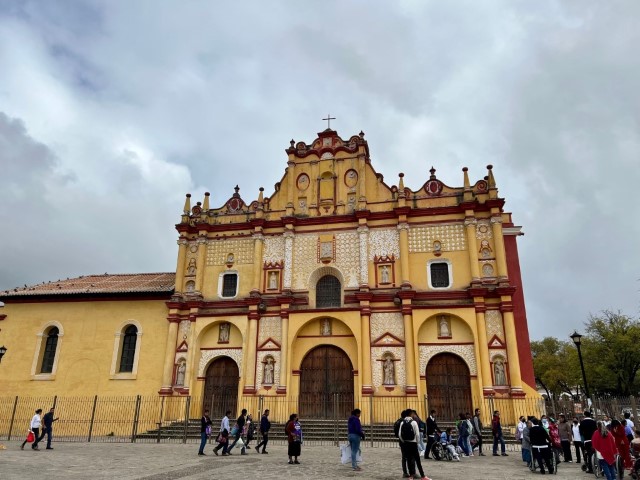 Coming off the square is the Real de Guadalupe Street. This vibrant and colourful pedestrian street is filled with cafes, restaurants, bars and artisan shops. At the end of the street is the picturesque yellow and white Guadalupe Church. There are approximately 80 steps to the top of the hill, but you are rewarded with one of the best views of San Cristobal. 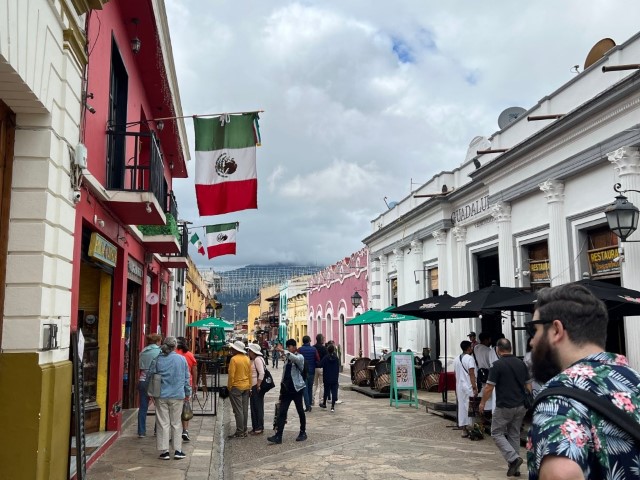 As a coffee lover, it was music to my ears to learn that Mexico is among the top 10 coffee producers in the world. Lucky for me the state of Chiapas contributes to over 40% of Mexico’s total production. San Cristobal is not lacking in coffee shops, and there are many in the city centre selling delicious coffee from all over Chiapas.

After an early start and a full-day journey, I arrived in the jungle town of Palenque. The town of Palenque is the gateway to the fascinating Maya archaeological site of the same name. On the way, I stopped at Roberto Barrios waterfalls and took a refreshing dip. Surrounded by thick forest and jungle, there are five waterfalls, with natural swimming pools and crystal-clear water. These cascades are much less busy than some of the other waterfalls in the area, and they are a favourite with the locals. 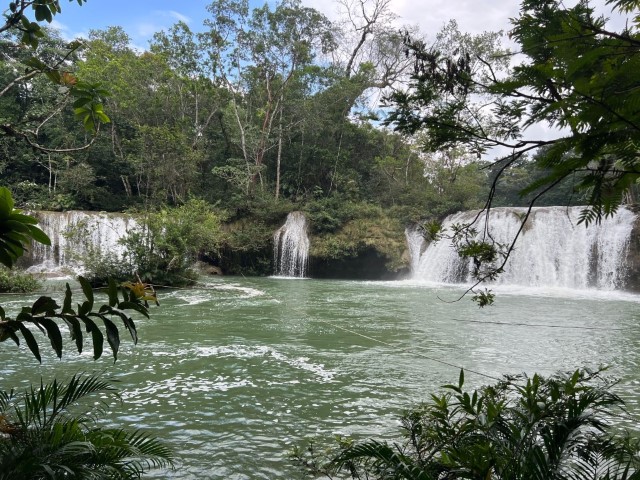 My hotel, our standard option the Chan-Kah Resort, is located outside the town on the road to the ruins. The hotel’s swimming pool was perfect for an afternoon relaxing after a long drive, and a refreshing respite from the jungle heat and humidity.

The next morning, I set off to visit the Maya temples of Palenque. Concealed deep in the verdant jungle and echoing the booming sounds of howler monkeys and parrots, Palenque is unique among all other Maya sites. The ruins date from 226 BC to 799 AD, and by the time the Spanish arrived in Chiapas in the 16th century, the Maya had abandoned the city. 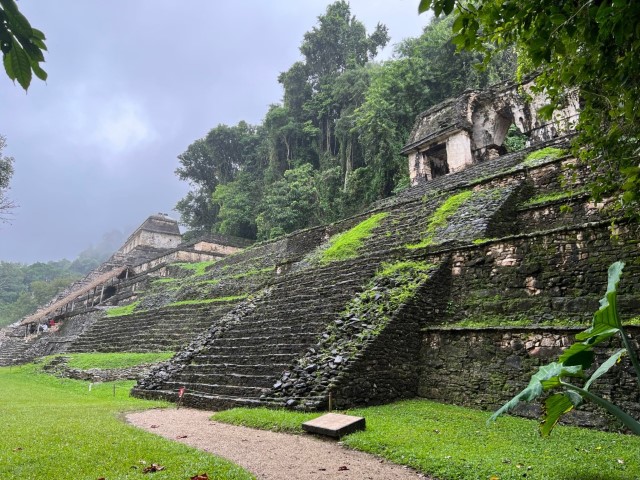 Inside the Temple of Inscriptions is one of the best examples of Maya hieroglyphics. They map around 180 years of Palenque’s history, detailing the lives of three rulers. Researchers have used the glyphic text to decipher Maya script, history and language. The guide explained how to read the hieroglyphics, which as somebody who loves learning about language and linguistics, was fascinating to me. 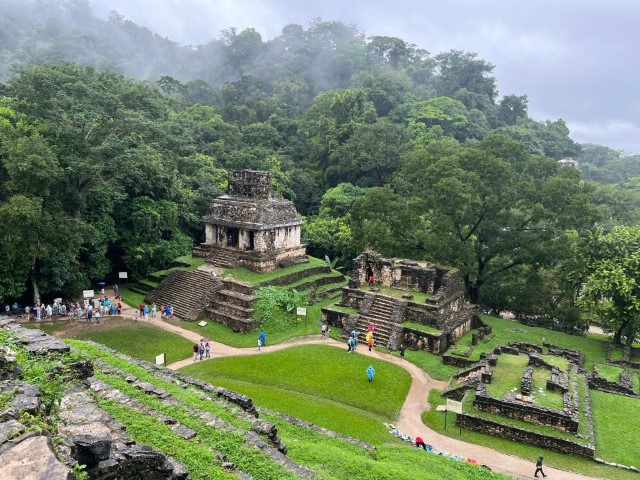 The jungle mist adds to the adventure of visiting Palenque.

The final city on my tour of Mexico was Merida, located in the Yucatan peninsula. Founded in 1542, Merida is one of Mexico’s oldest cities. When the Spanish arrived, a large Maya city known as T’ho stood where Merida is now situated. The Maya pyramids and temples were dismantled, and the stones used in the construction of the colonial city. Much of the colonial architecture still stands and many of the streets are very colourful and pleasant. 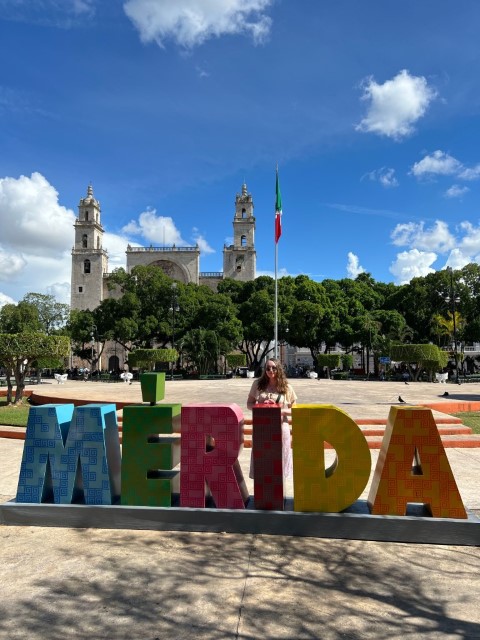 Behind me is the Cathedral of Merida, the oldest cathedral in Mexico and one of the oldest in the whole Americas.

Merida is a great base to visit the attractions of Yucatan, such as cenotes with fresh, cool water surrounded by jungle and the New Wonder of the World, Chichen Itza. Chichen Itza is a ruined ancient Maya city once home to 35,000 people. Rising to prominence in roughly 600 AD, the city became the regional capital of Yucatan in the 10th century. 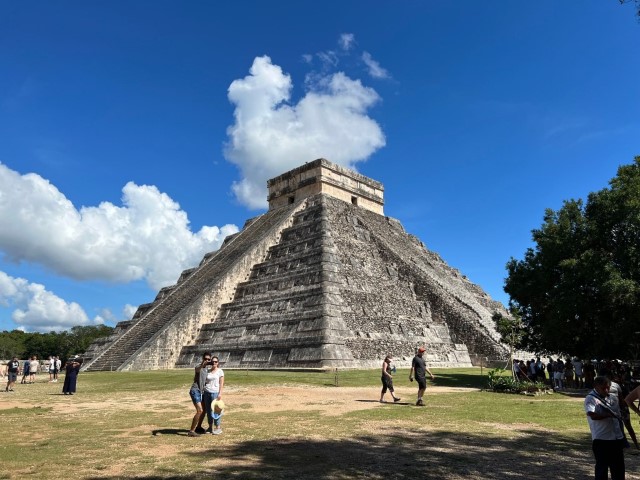 The iconic image of Chichen Itza.

The famous ‘El Castillo’ (The Castle) pyramid rises 24 metres above the main plaza. During the spring and autumnal equinoxes, when the sun sets, the shadows cast give an appearance of a serpent wriggling down the stairs.

The ball court, known for playing the game tlachtli, is the largest such court in the Americas. Standing on the north side of the court, it is possible to hear a whisper from 46 metres away! 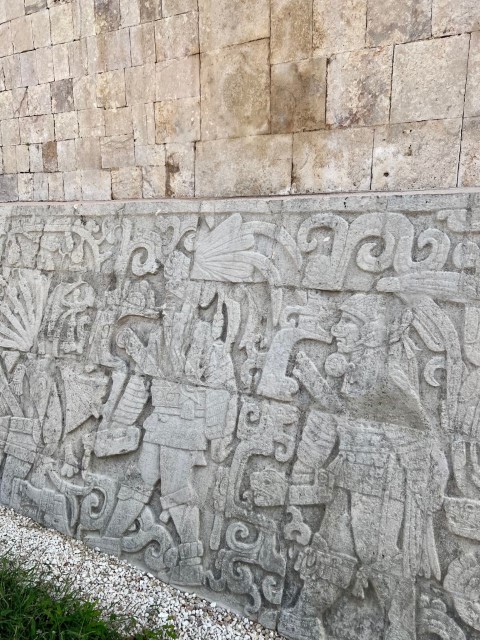 The walls of the court depict the victors of the game holding the severed heads of the losing team.

At the site is the Cult of the Cenote, where humans sacrificed themselves to the rain god, Chaac, by throwing themselves into the city’s biggest cenote along with gold, jade and other valuables.

After being abandoned, Chichen Itza succumbed to its jungle surroundings. Excavations began in the 19th century, and the ruins became Mexico’s most visited archaeological site. 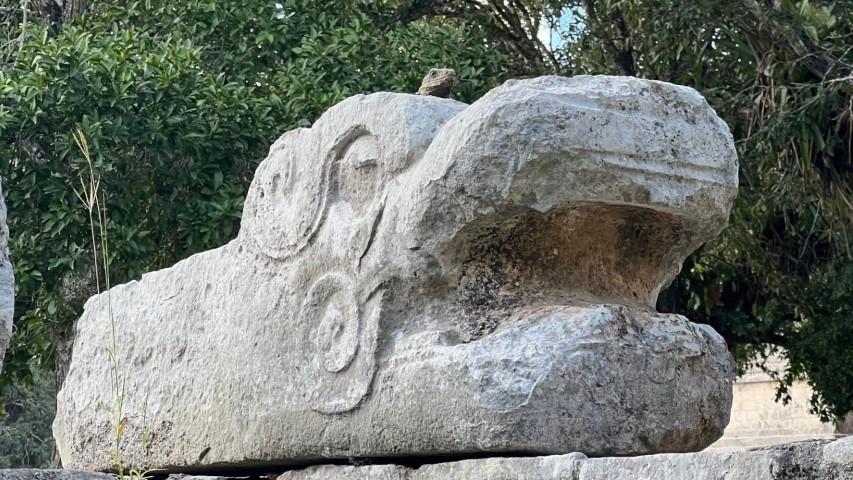 Iguana spotted perching on top of a statue.

My passage through Mexico had sadly come to an end after an amazing two weeks. Mexico is a country rich with interesting history, delicious food, fascinating culture and friendly people. I left Mexico wanting to visit more and luckily for me, I left much of the Yucatan to discover on a future trip!

If you are interested in visiting Mexico, talk to one of our experts to find out more. You can speak to one of our specialists by emailing This email address is being protected from spambots. You need JavaScript enabled to view it. or calling 020 7263 3000. You can view all of our Mexico holidays here.