Easter Island is the most remote inhabited island on Earth, almost 2,200 miles from the coast of Chile - this is almost the same as the distance from London to Timbuktu. This volcanic island, in the South Pacific, is only 15 miles across at its widest point and has a highest point over 500 metres above sea level. However, it is home to a culture which created 800 giant stone Moai statues, making this one of the world’s most enigmatic places. Read our blog for a personal insight into visiting Easter Island.

How to get to Easter Island

Since the construction of the Easter Island airport in 1968, tourism has played an increasingly important role in the economy of the island, and is now the most important activity for the islands. Many of the statues which had lain on the ground have now been replaced on their platforms. To get from Santiago to Easter Island, it is a five hour flight. On arrival to this isolated island, you will be greeted by a traditional reception with flower necklaces.

The history of the islands is very opaque, especially prior to European visits in the 18th century, but it is likely that the islands were first inhabited by Polynesian sailors, sometime around 800AD – 1200AD. The statue-building appears to have begun quite early, and by the time the first European visited the islands, on Easter day in 1722, there were Moai statues all over the island.

The next European visitors in 1770 also marvelled at the giant statues. However, it appears that sometime shortly after this there was some form of major problem on the island. When Captain Cook visited in 1774, he remarked that some of the figures were knocked down from their platforms, and by 1825 it appears that there were no statues left standing.

It is not clear exactly what went wrong, but it is likely that the statue cult was partially responsible. Perhaps too much resource was given over to the production of the statues and not enough to farming and fishing. Additionally, trees were heavily used in the construction of the Moai statues, and the island suffered from severe deforestation, with the forest which once covered much of the island virtually destroyed by the 18th century. The lack of trees will have made boat-building for fishing virtually impossible, and the lack of forest will have led to soil erosion, affecting farming. This environmental catastrophe seems to have led to violence amongst the population, and obsidian weapons dating from the 18th century have been found.

In addition to internal warring and environmental factors, the islanders faced great threats from outsiders. In the 1860s, Peruvian slave traders abducted over 1,500 islands to work in the guano trade. This reduced the population by half, and the population was almost wiped out by smallpox brought in from off the island. Although the population slowly recovered over the following years, much of the knowledge of previous cultures was lost forever.

The Chilean government annexed Easter Island in 1888, and leased all of it apart from the only town, Hanga Roa, to a British sheep farm, with the islands confined to the town. The islands were not given any say in the running of the island until 1964, when they were allowed outside of Hanga Roa and given full citizenship and the right to vote.

The Moai, weighing up to 86 tonnes, are giant stone heads and bodies, each carved individually, all similar in style, but slightly different. These have been erected on platforms around the island, almost all facing inland, protecting the islanders. It is likely that the statues represented ancestors, and were carved by different groups on the island, with the carvers supported by the fishermen and farmers of the island. As well as the Moai statues, there are many different sites on the island including volcanic craters, beautiful beaches, lakes and remains of a ceremonial village. Find out more about Easter Island’s attractions here.

If you would like to admire the monolithic stone head statues and relax on palm-fringed beaches, contact us to plan your Easter Island tour. 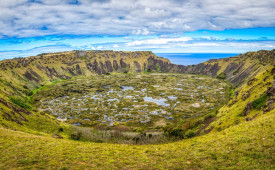 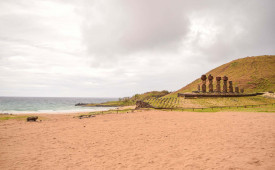