The characteristic orange dunes of the Namib Desert are some of the highest in the world, and have developed over many millions of years. The sand that forms the dunes was deposited into the Atlantic Ocean from the Orange River, and the Benguela current then carried this sand northwards, to be deposited back onto the land by the ocean’s surf. From here the wind carried the sand inland to form the dunes over time.

The name Sossusvlei is a combination of the Nama word for dead-end, sossus, and the Afrikaans word for marshes. Situated only about 60 kilometres from the Atlantic, in central Namibia, Sossusvlei is a striking place, with soaring dunes, dried marshes and petrified rock. While it refers specifically to one salt and clay pan, the name now refers to a larger area, including a number of nearby vleis or marshes.

When visiting the dunes, the day begins with an early start in order to reach the park gate for opening time at sunrise (typically between 6 – 6:30am), when the dunes are at their most picturesque. You may have time to climb one of the dunes in the area to be rewarded with a panoramic view of the pan. The most popular and slightly easier option is Dune 45, a 170-metre-high dune which takes around an hour to get to the top, depending on fitness levels. Depending on your group and other factors such as climate, you may also attempt to climb Big Daddy, the highest dune in the area at a staggering 325 metres. Due to the extreme heat, the climb can be very demanding and you may choose to climb part of it, or not do it at all. Deadvlei is a large expanse of dried white clay scattered with ghostly skeletons of camelthorn trees which date back 600 years.

Sesriem Canyon is located around five kilometres from the entrance gate of the park. This 30-metre-deep canyon was carved into the rock by the Tsauchab River over millions of years, and is one of the few places in the area that holds water.

Read Scott's blog to find out how he got on when climbing Big Daddy and exploring Deadvlei. 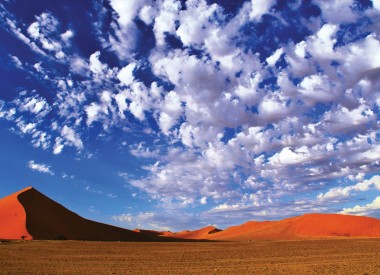