Botswana Mobile Safari: What To Expect 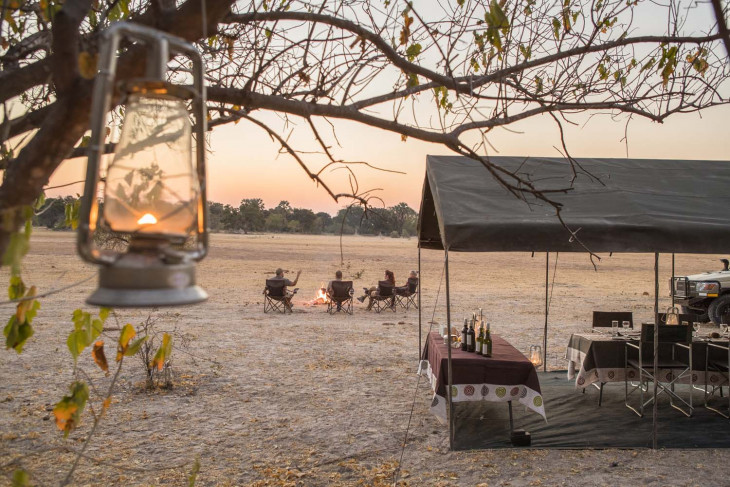 A mobile tented safari is a great way to experience Botswana, as it allows you to experience the best wildlife areas without the high cost of Botswana’s game lodges. Our Delta Mobile Safari and Victoria Falls holiday includes six nights camping in the Okavango Delta - three nights in the Moremi Game Reserve and three nights in the private Khwai Concession - before continuing onto Kasane by light aircraft. Our Extended Delta Mobile Safari and Victoria Falls holiday includes an additional three nights camping in Savuti, an area within Chobe National Park which borders the Okavango Delta to the west.

This blog helps you to make the most of your mobile tented safari. Keep reading to find out what to expect on arrival and on a typical day, including the weather, transport, camp, wildlife and more. 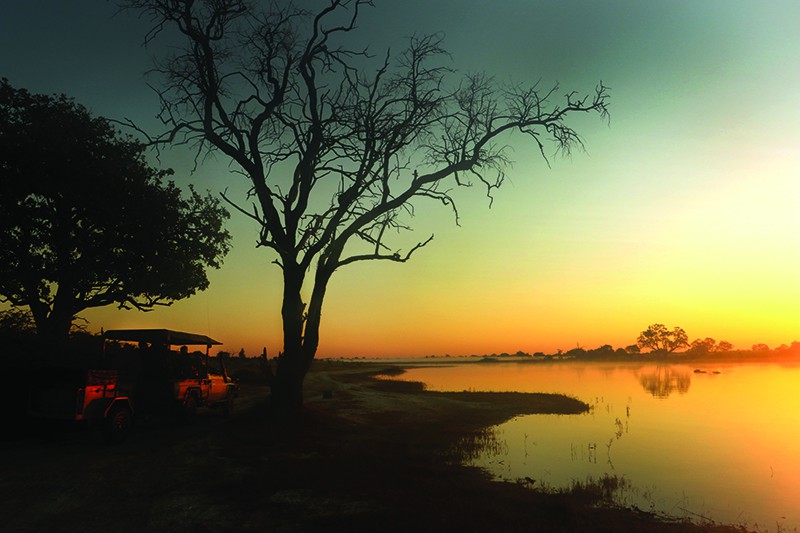 We offer our Botswana holidays only between March and November, with the best time to go being May to October as this is Botswana’s dry season. The Okavango Delta flows all year round, although wildlife tends to be easier to spot during the drier months as the animals congregate around the watering holes.

During the summer months, between November and April, it is very hot in the middle of the day, becoming cooler but still warm at night. The average daytime temperatures are around 35°C, dropping to low 20s during the night. Botswana is a summer rainfall region and late afternoon showers are common from December to April. 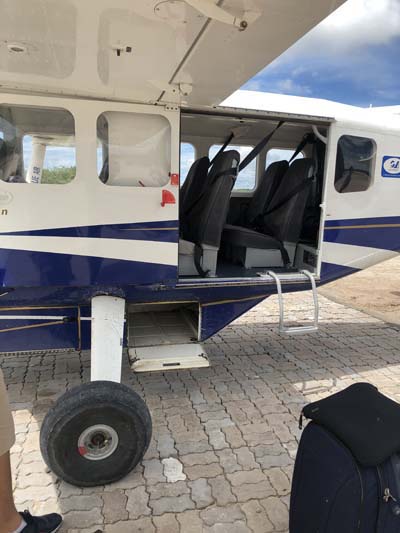 The flight by light aircraft to the Xakanaxa airstrip takes around 25 minutes from Maun or an hour from Kasane. Flights sometimes stop en-route to pick up and drop off passengers at other small airstrips, operating a ‘taxi’ style service. Flight times are arranged according to each day’s requirements, to fit in with activities of passengers.

On these flights, you are restricted to 20kg in total (for both carry-on and checked luggage) which must be packed in soft luggage as the planes used are small charter planes that are heavily regulated. The maximum dimensions for the luggage is 70x35x30cm. If you bring above the restricted amount you will be asked to leave items behind or to travel without your luggage so make sure you are within the guidelines.

At the end of the Botswana mobile safari, you take a light aircraft flight to Kasane, where you spend some time visiting Chobe National Park, before continuing to Victoria Falls. On the flight to Kasane, the same luggage restrictions apply, so we strongly recommend taking duffel/soft bags as they are more malleable and easier to fit into the belly of the aircraft above and vehicles in general.

There is a maximum of seven guests on the Okavango Delta safari. A very skilled safari team consisting of a professional guide, safari chef and up to two general camp staff will accompany you on a safari. Although the safari visits different areas, you are accompanied by the same guide throughout who will tailor the safari to the group’s interests or their big game bucket lists! You are met by your safari guide at the airstrip in Xakanaxa and driven through the Moremi Game Reserve to your first camp. All camps are set up by the general staff, ready for your arrival, and you will be assigned a tent. The camp consists of a campfire area, an open-sided dining area with a table, chairs and drink table, and the individual safari tents. 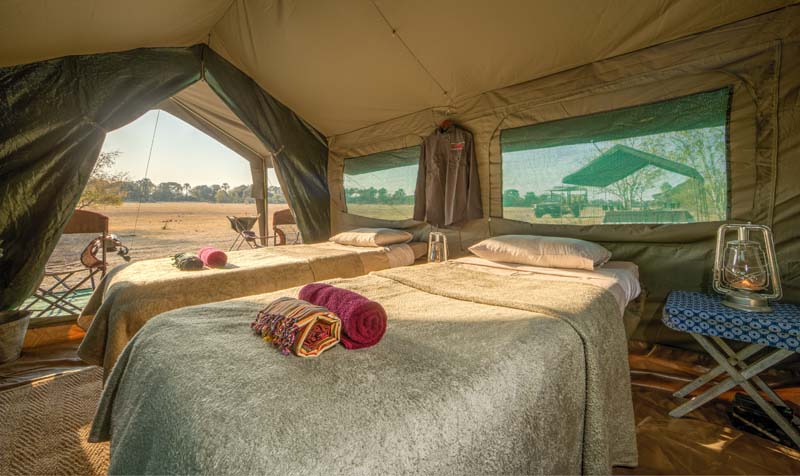 The tents are thick canvas with mesh windows and doors which can be left open to let in a breeze during the day and zipped closed to keep out the cold during the evenings and early mornings. There is no air conditioning or fans so tents can get hot during the day. Inside, the tents are furnished with two single camp beds with comfortable mattresses, duvets, sheets and pillows, a bedside table, a mat, a LED powered lamp. 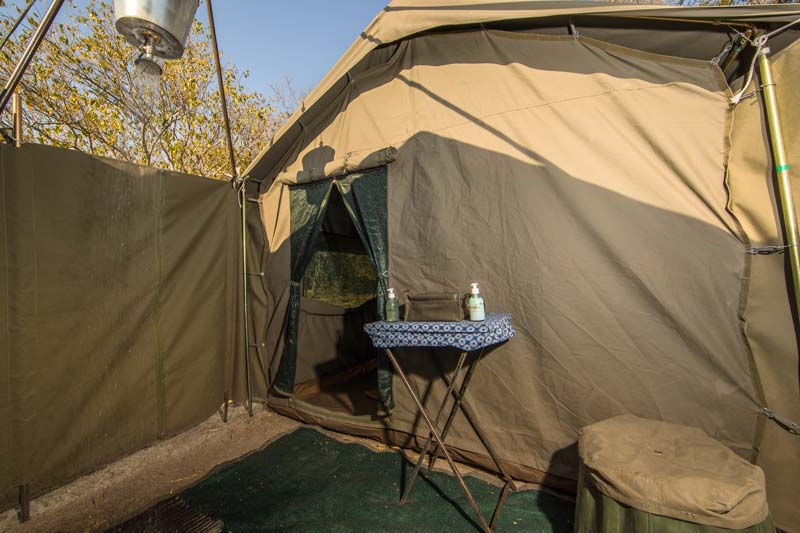 There is a private en-suite bathroom area with a hand basin, hot water bucket shower and a long drop toilet. Towels, shampoo and soap are provided. Water for the showers is provided by the camp staff. 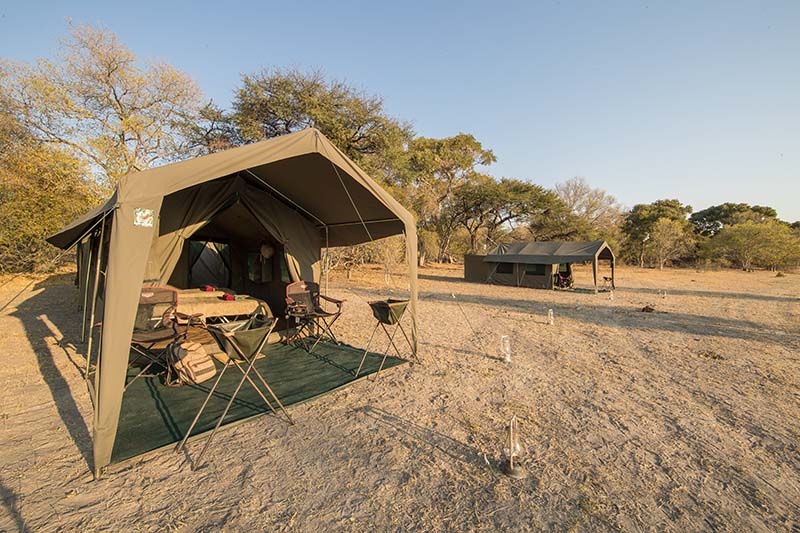 There is also a small shaded veranda at the front of the tent with foldable camp chairs. The open nature of the camp and lack of fencing in the reserves or concessions mean that wild animals can wander through camp. For this reason, you should not take any food into the tent, ensure you zip the tent up properly to prevent any ‘intruders’ and you should not leave your tent after lights out. There is no phone signal, Internet access or WiFi when on a mobile safari, so prepare to be disconnected from the outside world. In case of emergencies, a radio is used.

A Typical Day On Safari 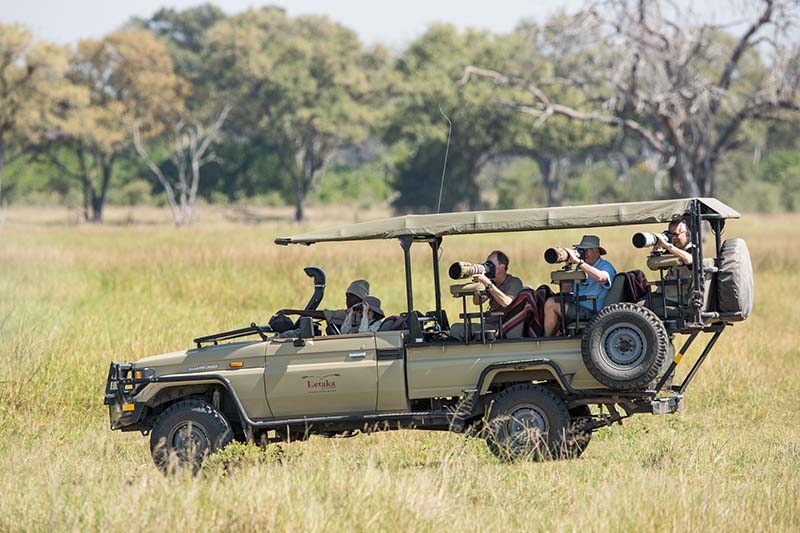 The best game viewing is in the early morning, so mornings in the bush start early. You will be up before sunrise for a light breakfast and some hot drinks. From here you go straight into a game viewing excursion in a 4x4 vehicle with your guide and the rest of your group, keeping your eyes peeled for wildlife.

Game drives are in open vehicles, so it can be chilly in the early mornings and evenings. The seats are in a three seats per row configuration. There will be a fridge either on the vehicle or the trailer so cold drinks are available to guests at all times on game drives.

After the sun is up, you will stop in a picturesque spot for a tea break. You return to camp around 10-11am for an early lunch consisting of fresh-baked camp bread, baked dishes and cold salads. The rest of the afternoon is free to relax or take a shower. In the late afternoon, you head out for another game viewing excursion, returning to camp for a simple but tasty three-course dinner. In areas outside of the Botswana national parks (i.e. in private concessions), you may also head out after dark with the use of a spotlight to look for nocturnal game. 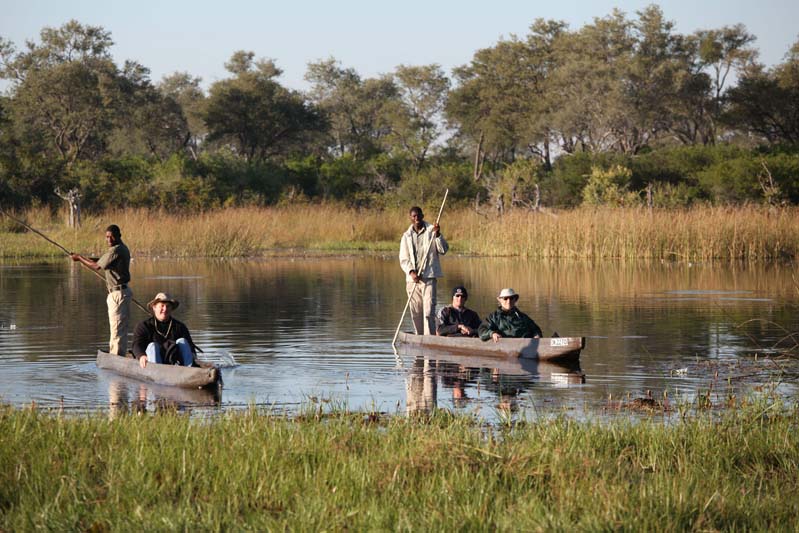 As well as game drives, mokoro canoe rides are a common activity on an Okavango Delta safari. A mokoro is a type of dugout canoe, propelled through the shallow waters of the delta using a ngashi pole. Traditionally, the canoes were carved out of ancient Okavango Delta trees, but nowadays they are made from fibreglass. During boat rides you are guided through the channels of the River Khwai by an experienced mokoro safari guide, spotting birdlife, crocodiles, hippos and elephants.

On travel days, you have an early start, pack your bags and leave camp to have breakfast somewhere scenic. After breakfast, you take a game drive towards our next camp, have lunch in a scenic spot and arrive at camp the early afternoon. The crew will have already set up camp, so you have some time to relax before an afternoon game drive. 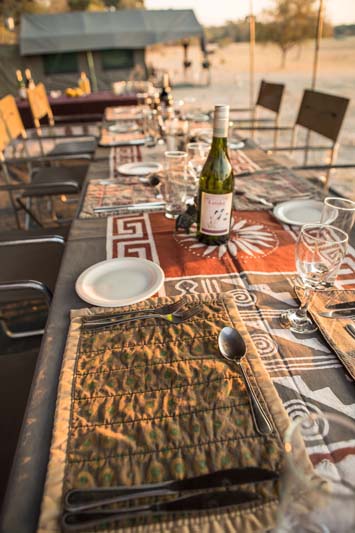 Obviously nothing can be guaranteed on safari. As well as looking for big game and tracking some of the more elusive animals, your safari guide will also point out smaller animals, birds and plants. 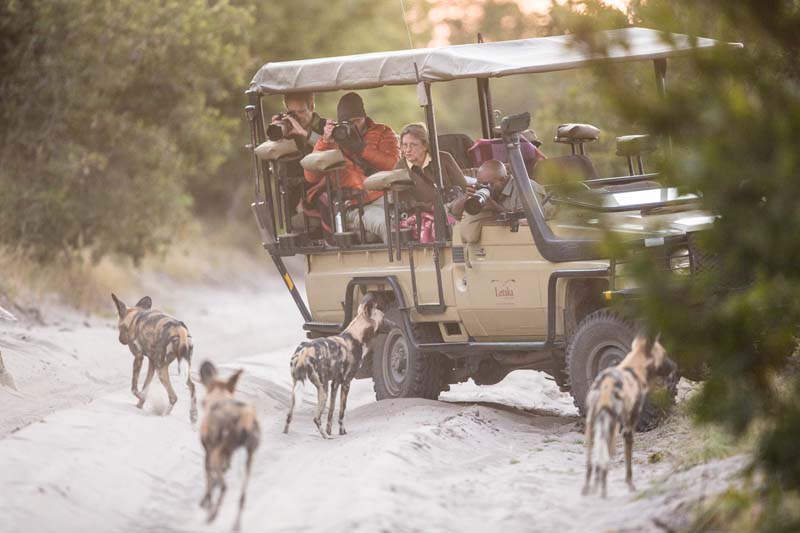 Covering almost a third of the Okavango Delta, the Moremi Game Reserve is made up of a huge variety of landscapes including pans, floodplains, grasslands, lagoons, savannahs and woodlands. As a result of the extremely variable habitat, the diversity of both wildlife and birdlife is excellent. Moremi is among the best game reserves in Africa for viewing the endangered African wild dog, as well as cheetah, leopard and lion. Over 400 bird species can be found, as well as 1,000 species of plant. 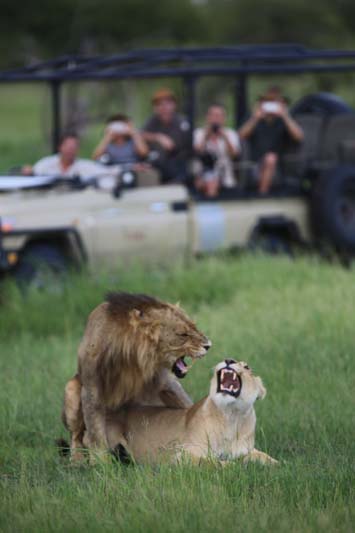 Sandwiched between Moremi Game Reserve and Chobe National Park, the Khwai Concession is spread over 1,800 square kilometres on the north-eastern fringes of the Okavango Delta. This large area is made up of diverse habitats such as Mopane forests, savannah, sweeping grasslands and floodplains with lagoons. The Khwai Concession is home to rare wildlife including roan and sable antelope, alongside large herds of migrating elephant, lion, hyena and African wild dog. With no fences separating Khwai from its larger neighbouring parks, the game can roam freely and you are likely to see just about everything that northern Botswana has to offer. 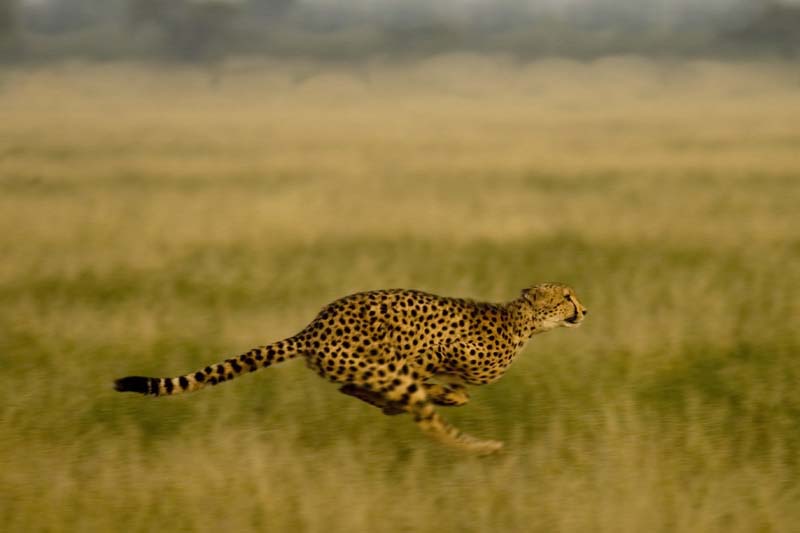 Note: Savuti is only visited on the Extended Delta Mobile Safari and Victoria Falls itinerary

Unlike the vast majority of Botswana, Savuti is not a completely flat landscape. The vegetation is very similar to the Kalahari Desert, with large outcrops of volcanic rock reaching up out of the sands, towering over the savannah and rolling grasslands. The wide-open country makes for excellent game viewing opportunities, and it is undoubtedly the dramatic wildlife interaction that makes the Savuti region so spectacular. The Savuti marsh is prime cheetah country and it is not unusual to also see wild dog, leopard and hyena roaming here. During dry season, sightings of warthog, kudu, impala, zebra and wildebeest are common, whilst the rainy season brings over 450 bird species. Thousands of doves and sandgrouse come down to drink in the morning, under constant surveillance by kites, eagles and other birds of prey. 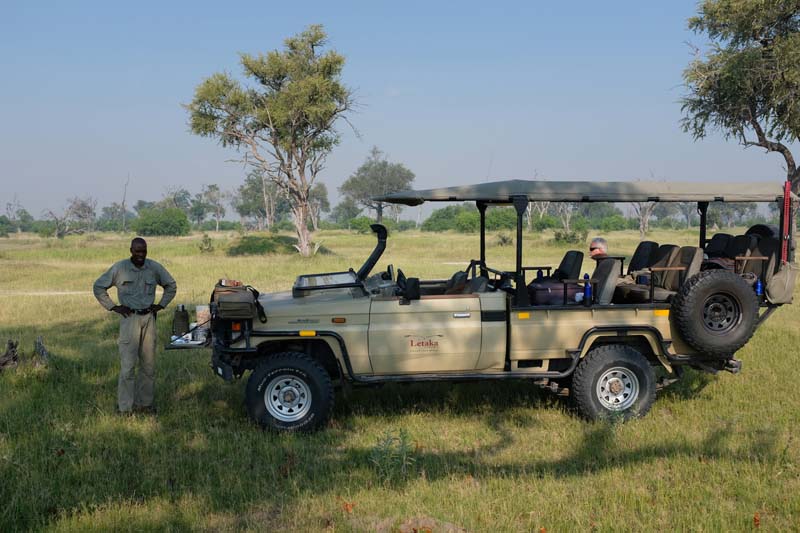 Mobile safaris are fully inclusive and the only cash required is for tipping your guide and crew. Tipping is optional and the amount is entirely up to you, but we recommend using the following guidelines:

We offer two Botswana travel packages, with extensions to Namibia and South Africa available. If you’d like to experience mobile camping on a Botswana safari trip for yourself, click here to browse our Botswana holidays or call 020 7263 3000 to speak to an expert.