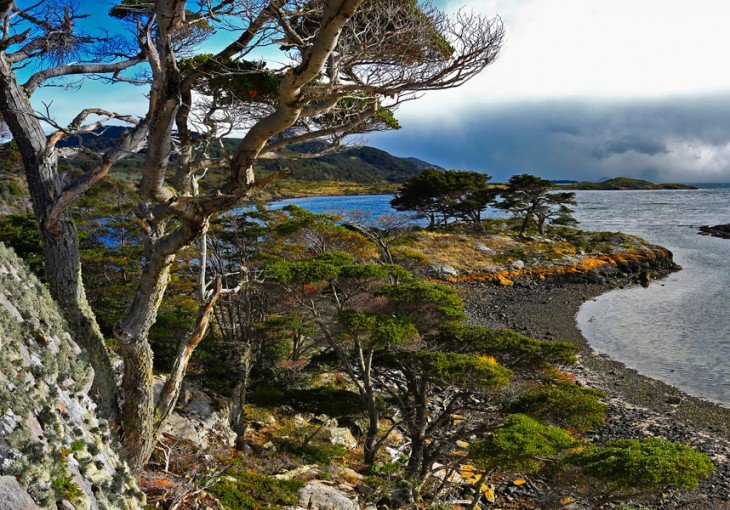 Tierra del Fuego, the archipelago at the end of the world, has been a beacon to explorers since the days of Magellan and Darwin. Lying off the southernmost tip of Patagonia, Tierra del Fuego encompasses a scattering of islands across the stormy South Atlantic and the Strait of Magellan. The islands of Tierra del Fuego, including the desolate Cape Horn and the Diego Ramírez Islands, are the forerunners to the frozen expanses of Antarctica, and exist in very harsh subpolar conditions. The largest island in the archipelago is Isla Grande de Tierra del Fuego, a rugged region of mountain ranges and steppe, fringed with glaciers and dramatic coastlines.

This land was once home to the Yahgan people, commonly believed to be the southernmost tribe in the world. These amazing people were able to successfully etch out a living in the harsh climate, hunting sea lions, diving for shellfish and traveling by canoe between islands to collect food. They kept warm by huddling around small fires, the rising smoke and embers of which were spotted by sailors on passing ships, who consequently referred to the island as the “The land of fire”. The Yahgan left strong impressions on all who encountered them, including Ferdinand Magellan, Charles Darwin, and the HMS Beagle captain himself, Robert FitzRoy. FitzRoy even went so far as to capture four Yahgan in an attempt to “civilise the savage.” He succeeded to the extent that the tribesmen were presented at court in London, but on return to their homeland they were quick to return to their former life style.

According to a survey in 2002, there are still approximately 2000 Yaghan in the area, but they are no longer the sole occupants of the archipelago. The capital of Tierra del Fuego, and the southernmost city in the world, is Ushuaia. The city is spectacularly bounded in the north by jagged and snow-covered mountains and on the south by the Beagle Channel, and acts as both the terminus of the world’s most southerly highway and the gateway to Antarctica. Originally built in the late 19th century b

y European explorers, Ushuaia still has a laid-back pioneer-town atmosphere, particularly evident in its charming houses, constructed with colourful timber and tin roofing. Despite its isolation, Ushuaia offers ample modern amenities and services making it an ideal base for exploring the epic Tierra del Fuego.

If you have been inspired to explore Tierra del Fuego yourself, you can find out more information about our holidays visiting Tierra del Fuego here. You can also see a full list of all our amazing Latin America holidays here or by ordering our brochure.