Tikal is arguably the most impressive all of the Maya sites in Central America. The ruins are set in the northern jungle state of Peten and lie 68km from the city of Flores.

There is evidence of agriculture at the site of Tikal as far back as 1000BC, but it wasn’t until the Classic Period (200-900AD) when Tikal grew into one of the most powerful Maya cities. It was around 250BC, after the collapse of El Mirador, when the first significant ceremonial structures appeared at Tikal. El Miradors collapse is believed to be due to the eruption of the Ilopango volcano. This eruption smothered a huge area in ash which disrupted trade routes. Thanks to El Mirador’s downfall, this left space for a new superpower in the region and Tikal and the nearby city of Uaxactun filled this vacuum. As Tikal and Uaxactun were so close to each other (less than a day’s walk) this meant that confrontation was inevitable. It is believed that Tikal’s rise in power came about due to an alliance with Teotihuacan in Central Mexico and also the introduction of new warfare equipment. This alliance and new weapons enabled Tikal’s warriors to overrun and defeat its nearby neighbor Uaxactun in 378AD. This victory enabled Tikal to control central Peten for almost the next 500 years.

By the middle of the 6th century, Tikal had grown to a size of approximately 100,000 people and covered an area of 30km2. Yet, as Tikal expanded and grew, new threats were appearing. To the north emerged a new superpower called Calakmul, which gradually started to encircle Tikal by controlling nearby states. Also, to the west in modern day Belize, the city of Caracol was seeking alliance with Calakmul in order to form a devastating allegiance. In 562, Tikal was conquered by the Lord Water from the city of Caracol, which defeated Tikal and sacrificed its king. The Kingdom of Caracol ruled over Tikal until the late 7th century.

After this defeat, Tikal entered a quieter period in its history. However, by 695AD Tikal had begun to recover and it launched an attack against Calakmul capturing and killing its king. The following year, Tikal attacked again and killed the newly instated king. These victories lead to Tikal becoming the dominant city in the Maya world again. After this period, most of the great temples around the Gran Plaza, which can still be seen today, were built.

Tikal was probably never completely forgotten by the local population. However, it was not until the mid 19 century that interest in the site rose again. In 1848, the ruins were ‘rediscovered’ by a government expedition.

Nowadays Tikal is protected by the Parque National Tikal, which covers an area of over 576km2. The park is home to a huge number of animal species and it is common to see spider and howler monkeys, white nosed coatis and a wide range of birds while exploring the park. It was declared a natural and cultural UNESCO world heritage site in 1979. 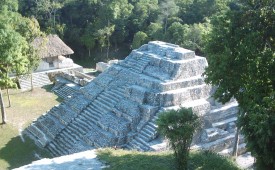