A Night on the Andean Explorer Sleeper Train 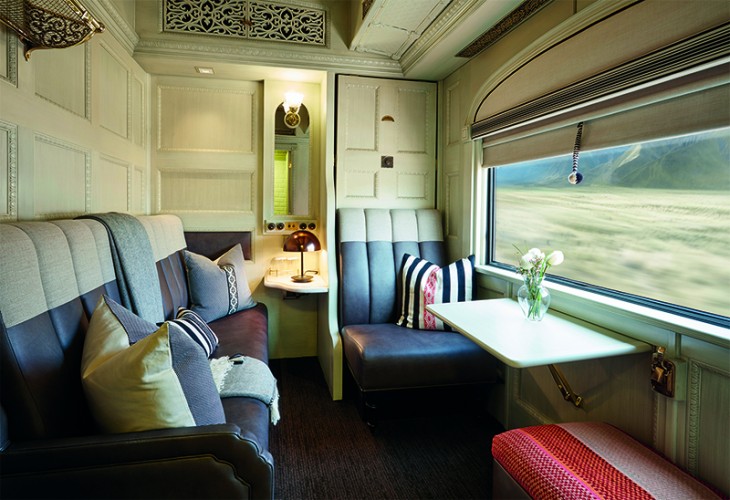 We were greeted at the station by Javier, the guest manager, who took our luggage and gave us a refreshing purple maize cocktail. The musicians played folk songs as the other guests arrived, and then we boarded the train. Our bags were taken to our cabins and we made our way to the piano bar, where we were given a glass of champagne and a welcome briefing as the train pulled out of Cusco's Wanchaq station at 11am.

We were then accompanied down the corridors, with the city giving way to the countryside as we were taken to our twin cabin. This was not large, but was well laid out so that it felt spacious. There was a window table and armchair, as well as a long leather banquette. The en-suite bathroom was small, but elegant, and the shower was both hot and had good water pressure. We had time to unpack our overnight bag and have a quick game of cards before walking to one of the two dining compartments, where we chose our table for lunch at 12.30pm. 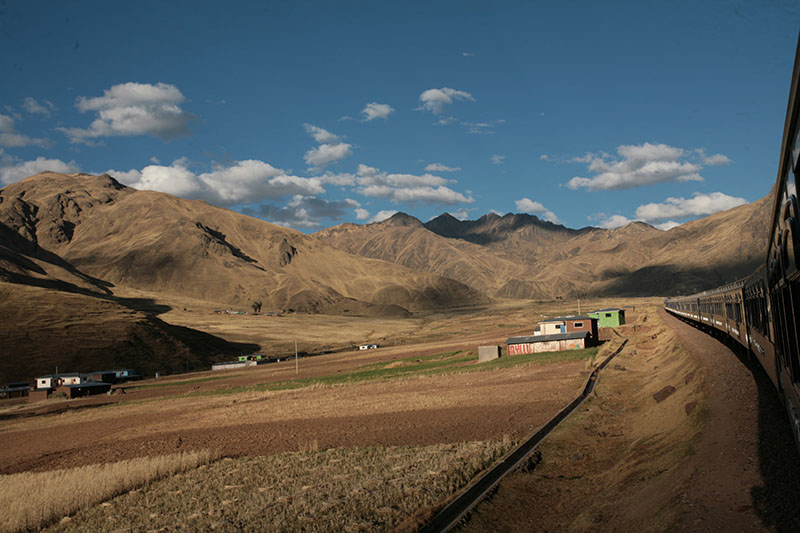 A few other guests were enjoying a cocktail in the bar as we sat down, and the lunch service felt very relaxed. The choice of bread was good, and the quinoa crispbread was a particular hit. The lunch menu was fixed, but the staff were very flexible and would prepare other options if something was not suitable. All the food was good, with a clear consommé followed by sea bass. The chocolate dessert rounded things off nicely, and the accompanying Chilean Sauvignon Blanc was excellent.

The post-lunch coffee was necessary to wake us up for the first excursion at 2pm. The train stopped at Tinta, where minibuses were waiting to take us the 10 minutes to the Inca temple of Raqchi, an interesting site dedicated to the creator god Wiracocha. The guide was good, giving an interesting tour, and we re-boarded the train at 3pm. Afternoon tea was ready to be served when we wanted, with finger sandwiches, pastries and biscuits, and a selection of rather good teas. We then had an hour or so before our next stop, so we made our way to the open-air observation car, enjoying the afternoon sunshine and the splendid vistas of the mountains and local communities rolling past, while enjoying a drink from the bar. 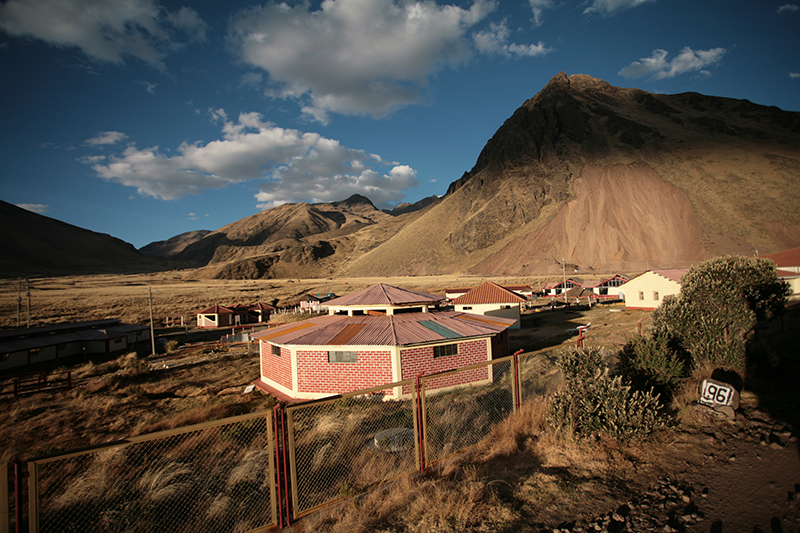 The train pulled up at Abra La Raya at around 5.30pm, the highest point of the line at over 4,300 metres, where the Urubamba River, which flows though the Sacred Valley, past Machu Picchu and eventually into the Amazon, forms. We were given a hot drink as we got off the train to enjoy the views of the snow-capped peaks shining in the evening light, and to have a look at the stalls selling crafts. The train pulled away as the last of the light faded. We returned to our cabin to change before returning to the piano bar for a rather good pisco sour before dinner at 7.30pm. This was again a good three-course meal accompanied by a very pleasant Argentinean malbec. The lights of various villages and towns flashed by as we enjoyed the meal.

After dinner, we had a game of cards in the bar, which emptied rather early as most other guests retired to their cabins around 9pm. Our cabin was made up for the night when we arrived, with the armchair and banquette having been turned into two single beds with very good quality, and warm, bedding. Although quite narrow, the beds were comfortable, and my eyes closed as the train rocked me to sleep. I did not notice when we pulled into the station on the shore of Lake Titicaca in Puno at around 11pm. 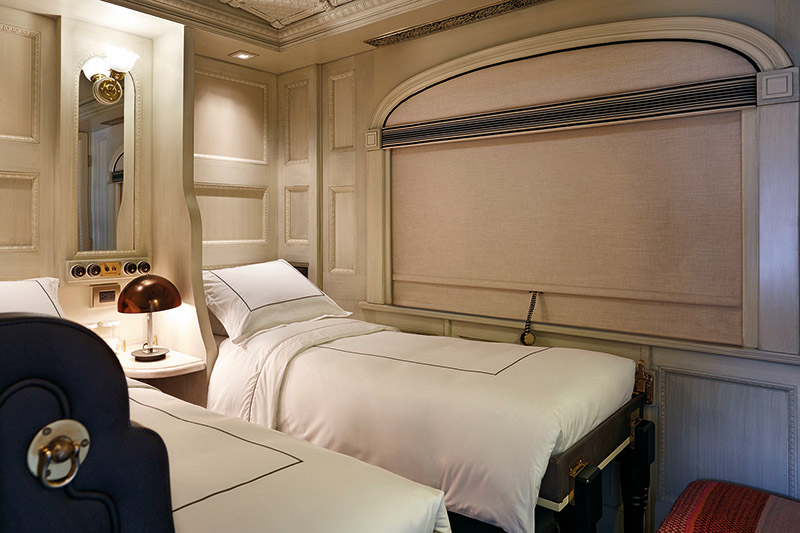 We were fortunate that our cabin window faced the lake, so we pulled the blind for a wonderful morning greeting of water and sunshine. We didn't make the early morning visit to the lakeside at 6.15am, and by the time we emerged for breakfast at 7.15am, most people had already disembarked.

However, we didn't feel hurried by the staff and were able to enjoy the excellent selection of pancakes, eggs and bacon before finally disembarking at almost 8am, where we were met by our Puno guide.

I loved the journey, particularly due to the lovely staff and the excellent service, and a feeling of being spoilt for the whole journey. There is always someone to offer you a drink, and there is a constant supply of (good) food. There is a real sense of romance in taking a sleeper train, even when just walking along the corridors to your cabin, and enjoying a cocktail in the bar carriage, with the beautiful landscapes passing by, makes for a fantastic journey. There were a few things that perhaps could be improved: the windows are quite low, so that when you are walking you don't get much of a view. Also, some of the sleeper cabin carriages are laid out with the windows facing away from Lake Titicaca, so you don't get much of a view when you wake up.

In some sense it is also a shame that the second half of the journey, from Abra La Raya to Lake Titicaca, is taken after dark, meaning that you don't get the views on this part of the journey. However, taking the rail journey in the dark, with the occasional light from a town or village, is beautiful. The train does not arrive into Puno until after 11pm, and most people retired to their cabins shortly after 9pm. Going to bed on a moving train has a real sense of old-fashioned glamour, which would be lost if you arrived in Puno in the early evening.

I stayed in a twin cabin, which was excellent both as a day cabin and also when the beds were made. The bunk cabins are well laid out, but are smaller, have a smaller window and there is only one banquette. The bathroom is the same size as in a twin cabin, and the beds are also the same size, although as they are the full width of the cabin, you do feel more squashed in. The bunk cabins are perfectly decent, but for a relatively modest additional cost, the upgrade to the twin cabin is worthwhile. Both the Junior Double Bed cabins and the Deluxe Double Bed cabins are much more spacious, with a fully-made up double bed, as well as armchairs and a table. The extra size of the bathroom in the Deluxe cabin is noticeable and very nice to have. There is limited storage space in the wardrobes of all the cabins, with hangers, bathrobes, slippers and safes. Main luggage is stored in the luggage car, and can be brought to your cabin if you require access to this during the journey.

Llama Travel offers the Belmond Andean Explorer train experience as an optional excursion on any of our Incas & Conquistadors + Lake Titicaca holidays. You can browse the options here.