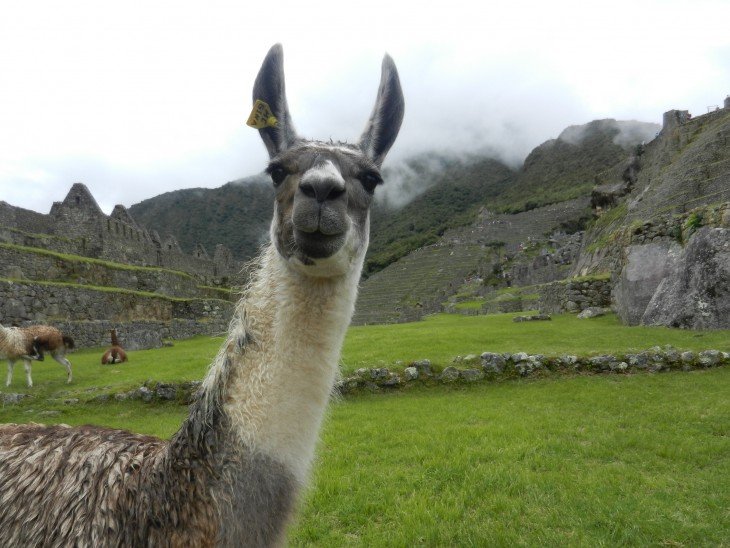 South America is a land of incredible vistas and astounding cities, but for me, the best thing about South America is the amazing animals that live there. From the long limbed Jabiru stork wading through the wetlands of the Pantanal, to the scuttling red Sally Lightfoot crabs that scamper the shores of the Galapagos Islands, and cheeky capuchin monkeys that swing through the treetops of Costa Rica, South America is a wildlife lover’s dream. The below list of my particular favourites only scratches the surface of the spectacular spectrum of wildlife that call the Americas home.

When talking about the top animal attractions of South America, what would be more natural than to begin with our namesake creature, the llama! Llamas have been synonymous with Peru for some time, they were first tamed some 5,000 years ago by the ancient inhabitants of the Andes. Llamas also had an important place in the Inca culture, providing food, clothing, transportation and even at times sacrifices to the gods. Life for Peru’s llamas of today is actually not all that different, just with a little less worry about the next Inti Raymi festival and a little more time photo bombing tourists at Machu Picchu.

Where to find llamas?

They are certainly not hard to come by in South America, but the llamas of Machu Picchu are known to be particularly friendly and always up for a photo opportunity. You can see llamas on our Incas & Conquistadors 12 day holiday.

A funny name for a funny creature. The blue-footed-booby is a large conspicuous seabird with a cigar-shaped body, a wedge tail and large webbed blue feet. The name ‘booby’ comes from the Spanish term ‘bubi’, which means ‘stupid fellow’. This is because the blue-footed booby is clumsy on the land, and like other Galapagos seabirds, can be very tame. The colour of the Boobies’ feet range from electric blue to indigo blue and even turquoise. No one really knows quite why their feet have evolved to be such a bombastic colour. A common theory is that the blue webbed toes are there to attract a mate, as the booby courtship rituals are all about the feet, with male boobies deliberately lifting their feet and strutting their stuff to impress the ladies. Interestingly, the blueness of their feet is also an indicator of a bird’s health, since the colour comes from pigments obtained from a diet of fresh fish.

Blue-footed-boobies, along with their cousins Nazca and red-footed boobies, can be found on various islands in the Galapagos. You can see blue-footed boobies on our Galapagos Holidays.

The Galapagos boobies may be a lot fun, but the real star of the magical isles is the Galapagos giant tortoise, so much so that the islands were even named after them (“galapágo” means “tortoise” in Spanish). A large hulking creature weighing up to a hefty 250 kg, despite its rather Jurassic appearance, the Galapagos giant tortoise is known for its gentle docile demeanour, having evolved with the absence of predators. The absence of any real threats has also meant that these gentle giants are used to living long, with the oldest tortoise on record being over 150 years old. It is possible, though admittedly unlikely, that there exists today on one of the tortoise reserves of the Galapagos an old-timer that was a hatchling at the time of Charles Darwin’s famous visit in 1835. Speaking of Darwin, the arrival of mankind to the Galapagos Islands proved deadly to the giant tortoises and unmasked a previously unknown weakness, their own deliciousness! The tastiness of the tortoise became something of a legend, with sailors raving about how tortoise meat was so much better than chicken, beef and even butter. Reportedly there were once so many tortoises that one could cross a beach walking solely across their shells – but following the feeding frenzy their numbers dwindled. Thankfully, with their now protected status and the good work done at the giant tortoise reserve in the highlands of Santa Cruz, this one of a kind species is making a great comeback.

Where to find Galapagos giant tortoises?

As the name implies, this beautiful creature makes its home on the Galapagos Islands. The highlands of Santa Cruz are a particularly good spot to meet them. You can see Galapagos giant tortoises on our Galapagos Holidays.

Found in the Andes mountains and adjacent Pacific coasts of western South America, the mighty condor is part of the New World vulture family and is the largest flying land bird in the Western Hemisphere. Cutting an impressive figure in the sky, the condor has a wingspan stretching over three metres wide, and a ruff of white feathers surrounding the base of its neck. There is something about its dull red nearly featherless head which gives the condor an air of nobility and intelligence. Indeed they are aviation masters, using thermal currents that flow from gorges to rise high in the skies, often gliding for long periods without a single movement of their vast wings. A condor soaring across the horizon is one the most majestic sights in all of South America, so it is not surprising that the Andean condor plays an important role in the mythology of the Andean regions, where they were once believed to be immortal gods. The bird of prey is also the national symbol of Argentina, Bolivia, Chile, Colombia, Ecuador, and Peru.

Where to find condors?

The Colca Canyon isn’t known as “where the Condor flies” for no reason. About 50 make the canyon their home. Sightings cannot be guaranteed, but the most spectacular location to try your luck is the Cruz del Condor view point. You can look for condors on our Incas & Conquistadors + Condors & Convents holiday.

This fascinating family of frogs owe their name to the fact that the toxic secretions from their skin have been commonly been used by Amerindians to coat the tips of blow darts and arrows to make for a particularly deadly weapon. Some frogs are so toxic that they should not even be touched with uncovered hands. Fortunately this is not quite the case with the 8 poison dart frog species that live in Costa Rica, but nevertheless they should be treated with caution and respect. Unusually for amphibians, poison dart frogs are active during the day, so all the better to see their brilliantly jewel-coloured skin, which can shimmer from neon blue to golden yellow and black striped and spotted. These little beasties are not shy, they do anything but camouflage; instead they adopt what is known as an aposematic colouration defence, with their unnatural colourings giving any would-be-predators the clear message of “eat me, and you will be sick…or worse”. Interestingly, the toxic secretions of the frogs is dependent upon diet. Captive raised poison-dart frogs which are not fed ants do not develop the toxins necessary to back up the threat of their fierce skin tones.

Where to find poison dart frogs?

These colourful critters can be found all over Costa Rica, but particularly in Tortuguero. You can see poison dart frogs on our Best of Costa Rica holiday.

If you have been inspired to discover the weird and wonderful wildlife of South America for yourself, then you can check out our great range of Peru, Costa Rica, Galapagos and Brazil holidays, all of which include opportunities for some fantastic wildlife spots.

You can also find out more information on all our amazing Latin American holidays by visiting our Holiday pages, ordering our brochure or giving us a call on 020 7263 3000.