The classic Inca Trail is a four-day trek crossing high mountain passes, ending at Machu Picchu. This is in fact only one of many Inca trails in the Cusco area, a number of which are still in use today by locals. However, this trail has become famous due to its final destination.

History of the Inca Trail

The Incas built an enormous set of trails that spanned their empire, enabling them to cross great distances relatively rapidly. These trails were well maintained, and by using chasquis (messengers), messages or goods could be sent all over the empire very quickly. Each chasqui would run a leg of approximately 10km before passing on the message to the next chasqui. For example, it was said that fish from the port of Puerto Inca, south of Nazca, could get to Cusco, 250km and many mountain passes away, in under 24 hours.

The Inca Trail to Machu Picchu

In addition to the incredible end point, the trail itself is superb. The change in scenery and vegetation, as the walk first rises to 4,200m before descending into the cloud forest, is fantastic. The trail also helps give some important background information to Machu Picchu. Rather than being a lost city, completely isolated, the many ruins on the route help to place Machu Picchu in context. The Inca Trail is enclosed in the area known as the Machu Picchu Historical Sanctuary, and is a very important natural, as well as archaeological, reserve. The flora that is seen, including many varieties of orchids, is fabulous, and there is also the chance to see some interesting wildlife, including condors if you are lucky. The whole walk is very beautiful, and it is easy to understand how it has become one of the most popular treks in the world.

The trek has become so popular, in fact, that it could hardly be called a walk in the wilderness. In addition to people on your group, up to 500 people start the trail each day, including porters and trekkers. It is impossible to walk the Inca Trail without seeing other people, so walk the trail prepared: expect beautiful ruins and stunning scenery, but do not expect an escape from other tourists. Despite this, as everybody walks the trail in the same direction, you do not actually bump into many other people.

Click to read one of customer's blogs about her experiences on the Inca Trail.

The trail had been getting so crowded that it was being damaged. People were camping in many places, including those that were supposedly forbidden. Open campfires were being lit, destroying the environment, and litter was becoming a real problem. To counter this, Peru's National Institute of Culture has introduced some very strict regulations. It is now only possible to walk the Inca Trail as part of an official group through an agency with authorisation. Camping is in specific sites only. No open fires are allowed – all agencies carry natural gas cylinders for cooking. There is a limit of 200 trekkers allowed to start the trail each day, and with its increasing popularity, tickets sell out months in advance so ensure you book as soon as possible. There are checkpoints throughout the trail ensuring that regulations are being followed.

In order to protect the Inca Trail, Peru's National Institute of Culture has introduced some strict regulations. There is a limit of 500 permits per day to walk the Inca Trail. This 500 permit limit includes the porters, guides and cooks, so there are only around 200 spaces for trekkers. Due to the popularity of the Inca Trail, spaces fill up early, so we recommend booking at least three or four months in advance. For some periods of the year, spaces can fill up even earlier than this. Please contact us to check the latest availability. 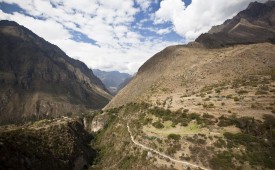 The trail (day by day) 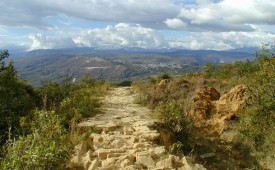 A day on the Inca Trail 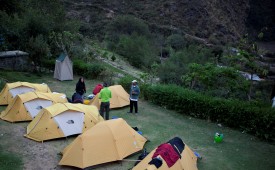