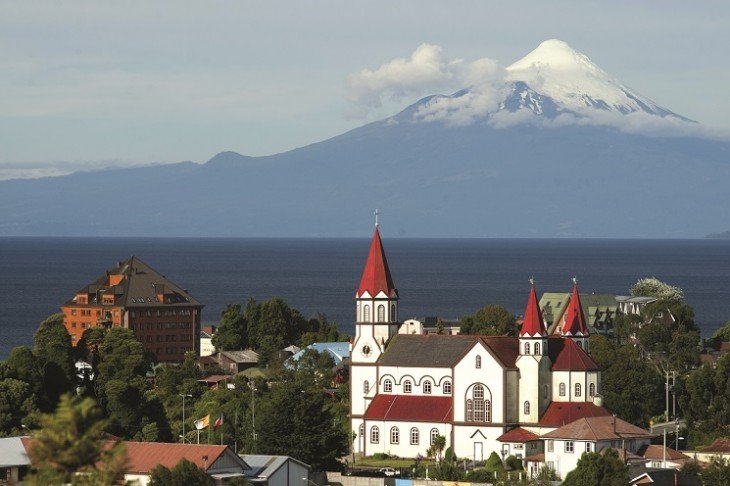 Llama Travel’s Travel Consultant Charlotte recently had the pleasure of taking her first trip to Argentina and Chile. It came as no surprise to her that the glaciers were vast and beautiful, Torres del Paine was magnificent and awe-inspiring and that Buenos Aires was elegant and thriving. Something that did come as a surprise to Charlotte was just how much she loved the Chilean Lake District. So much so that she has decided to make it the subject of her first blog from her Patagonia travels. Read on to see why Charlotte thinks the Chilean Lake District is more than worth a visit.

I recently visited the wonderful countries of Chile and Argentina and fell in love with the amazing region of Patagonia.

Patagonia begins in the green and fertile pasture lands of the Lake District and finishes at the isolated and remote Cape Horn, an area often referred to as ‘the ends of the earth’. This region spans two countries, Chile and Argentina, and is made up of spectacular mountain peaks, lakes, glaciers, awe inspiring steppe land and snow-capped volcanoes. It is believed this magical land was named Patagonia by the explorer Ferdinand Magellan. It was so called after the race of mythical giants he claimed to have encountered called the ‘Patagons’. It isn’t hard to see how this magical and beguiling landscape could conjure up such fantastical ideas.

I started my journey with a visit to the Chilean Lake District, located in the northern part of the Patagonian region. It was just a two hour flight from Santiago De Chile down to the Lake District and then a short transfer from the small airport at Puerto Montt to our destination of Puerto Varas. Puerto Varas is a pretty Germanic style town located on the western shoreline of Lago Llanquihue beneath the shadows of the snowcapped Osorno and Calbuco Volcanoes. The landscape is incredibly verdant with lush forests and gently rolling farmland. The green fields and beautiful lakes do come at a price, this area has on average over 200 rainy days each year. However, there is a lot more to this wonderful area than the weather.

Built by German Colonists the town of Puerto Varas has a very European feel to it.  It has a rich cafe culture with a plethora of cake shops and, many locals claim, the best coffee in Chile. The town itself is quite compact and it is easy to walk from both hotels into the centre and down to the lakeside. Puerto Varas is one of the most popular outdoor activity hubs in Chile. In winter it is a popular skiing destination and in summer offers a wide range of activities from Mountain biking and climbing to a variety of water sports which can all be arranged locally.

On arrival into Puerto Varas I joined our guide for our new Osorno Volcano and Hike excursion. Our journey began by road as we headed into the foothills of the Osorno Volcano. The road winds through green forests for several miles before finishing at the Osorno Ski Centre. This is the beginning of the chairlift system which ascends the side of the volcano. In winter this is used to transport skiers up the mountain and in spring or summer can, on a good day, offer tourists a rare glimpse through the almost permanent cloud cover of the breath-taking Lake District. As we were a little ahead of schedule we managed to fit in a trip on the chairlift. Even in summer the temperature at the top was bracing and unfortunately the visibility was very limited. 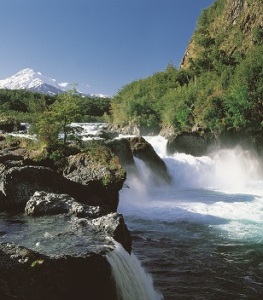 After a necessary hot chocolate to warm us up we descended the lower slopes to begin a five kilometre walk along the Sendero Solitario.  This picturesque walk gives impressive views over the Lake District landscape. On a good day you can also see up to the peak of the snow-capped Osorno Volcano. The soil beneath the volcano is extremely fertile and the forest which sweeps up the sides of Osorno is dense with flora and fauna. As we walked through this ancient forest our guide pointed out various flowers and explained the significance of these to the indigenous people of the Lake District area. The walk is done at a slow place and plenty of time is given to take pictures and enjoy the experience of walking through this pristine and beautiful area.

The excursion ended with a short walk to the stunningly turquoise Petrohue Falls. It is then around an hour’s drive along the edge of Lago Llanquihue back to Puerto Varas. We then spent a well-deserved and relaxing evening enjoying a fantastic dinner in the restaurant of the Cumbres Patagonicas hotel. This charming hotel is built in a traditional Lake District style and has incredible views over the lake. 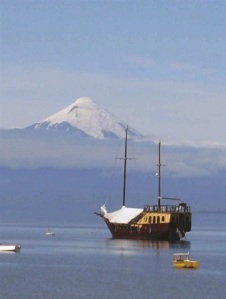 The next day it was unfortunately time to leave the Lake District. The Lake District is often overlooked by travellers to Patagonia. Perhaps this is because the region doesn’t have the instant attraction of the glaciers and the absolute wilderness that you find further south. The Lake District is different. Sitting on the cusp of Patagonia the Lake District is more accessible than a large percentage of the region. It is because of this that it feels more vibrant and more cultural than the south. There is much more to this area than landscapes, the local people are warm and friendly with a strong regional identity. There is an abundance of adventure sports and outdoor activities on offer in a relatively compact area so it is very easy to get out and explore the incredible countryside.

As we boarded our flight to Puerto Arenas, despite my excitement about the next part of the journey, I felt slightly regretful to be leaving the Lakes and I know that I will return soon for a much longer visit.